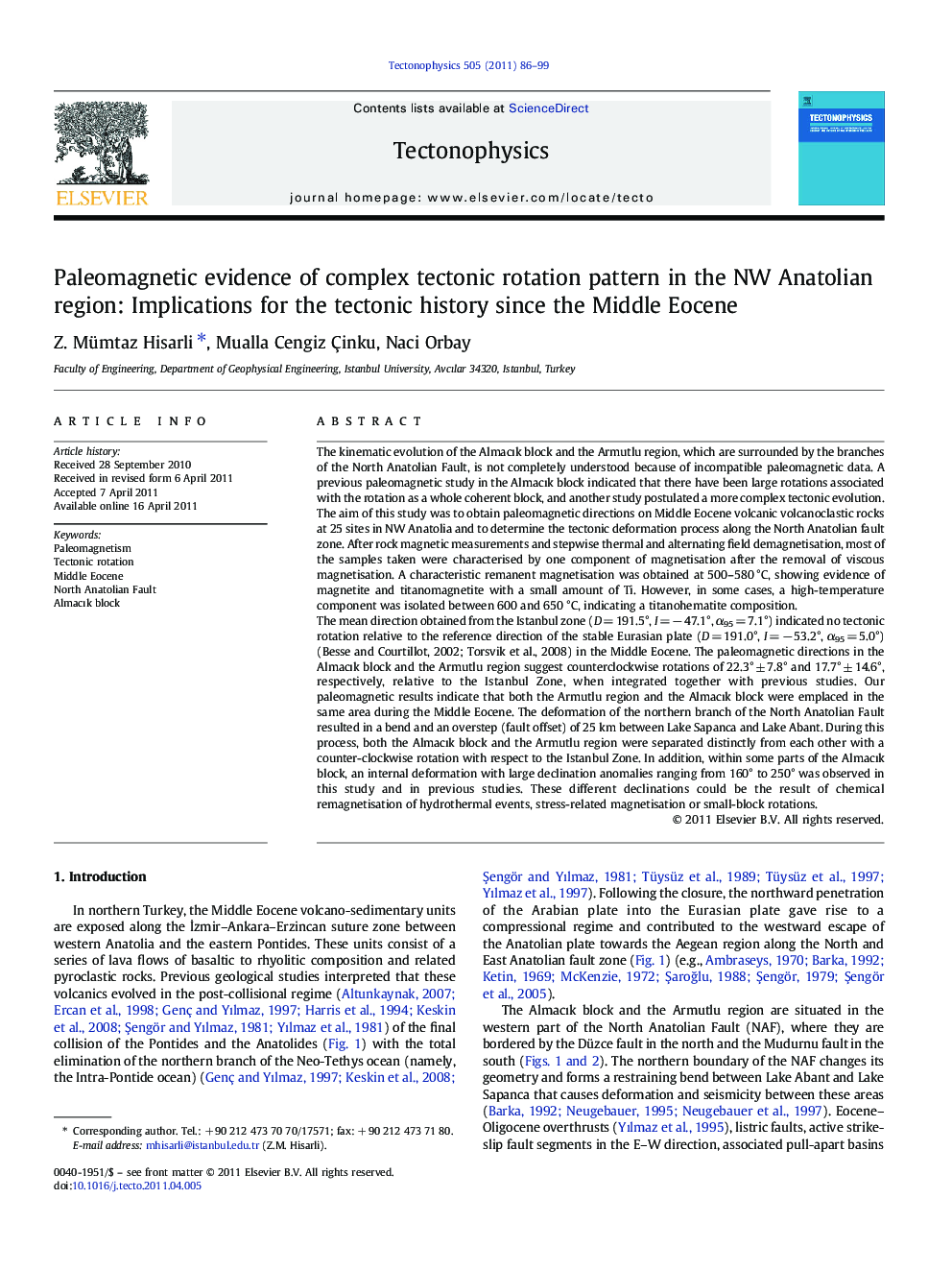 The kinematic evolution of the Almacık block and the Armutlu region, which are surrounded by the branches of the North Anatolian Fault, is not completely understood because of incompatible paleomagnetic data. A previous paleomagnetic study in the Almacık block indicated that there have been large rotations associated with the rotation as a whole coherent block, and another study postulated a more complex tectonic evolution.The aim of this study was to obtain paleomagnetic directions on Middle Eocene volcanic volcanoclastic rocks at 25 sites in NW Anatolia and to determine the tectonic deformation process along the North Anatolian fault zone. After rock magnetic measurements and stepwise thermal and alternating field demagnetisation, most of the samples taken were characterised by one component of magnetisation after the removal of viscous magnetisation. A characteristic remanent magnetisation was obtained at 500–580 °C, showing evidence of magnetite and titanomagnetite with a small amount of Ti. However, in some cases, a high-temperature component was isolated between 600 and 650 °C, indicating a titanohematite composition.The mean direction obtained from the Istanbul zone (D = 191.5°, I = − 47.1°, α95 = 7.1°) indicated no tectonic rotation relative to the reference direction of the stable Eurasian plate (D = 191.0°, I = − 53.2°, α95 = 5.0°) (Besse and Courtillot, 2002; Torsvik et al., 2008) in the Middle Eocene. The paleomagnetic directions in the Almacık block and the Armutlu region suggest counterclockwise rotations of 22.3° ± 7.8° and 17.7° ± 14.6°, respectively, relative to the Istanbul Zone, when integrated together with previous studies. Our paleomagnetic results indicate that both the Armutlu region and the Almacık block were emplaced in the same area during the Middle Eocene. The deformation of the northern branch of the North Anatolian Fault resulted in a bend and an overstep (fault offset) of 25 km between Lake Sapanca and Lake Abant. During this process, both the Almacık block and the Armutlu region were separated distinctly from each other with a counter-clockwise rotation with respect to the Istanbul Zone. In addition, within some parts of the Almacık block, an internal deformation with large declination anomalies ranging from 160° to 250° was observed in this study and in previous studies. These different declinations could be the result of chemical remagnetisation of hydrothermal events, stress-related magnetisation or small-block rotations.