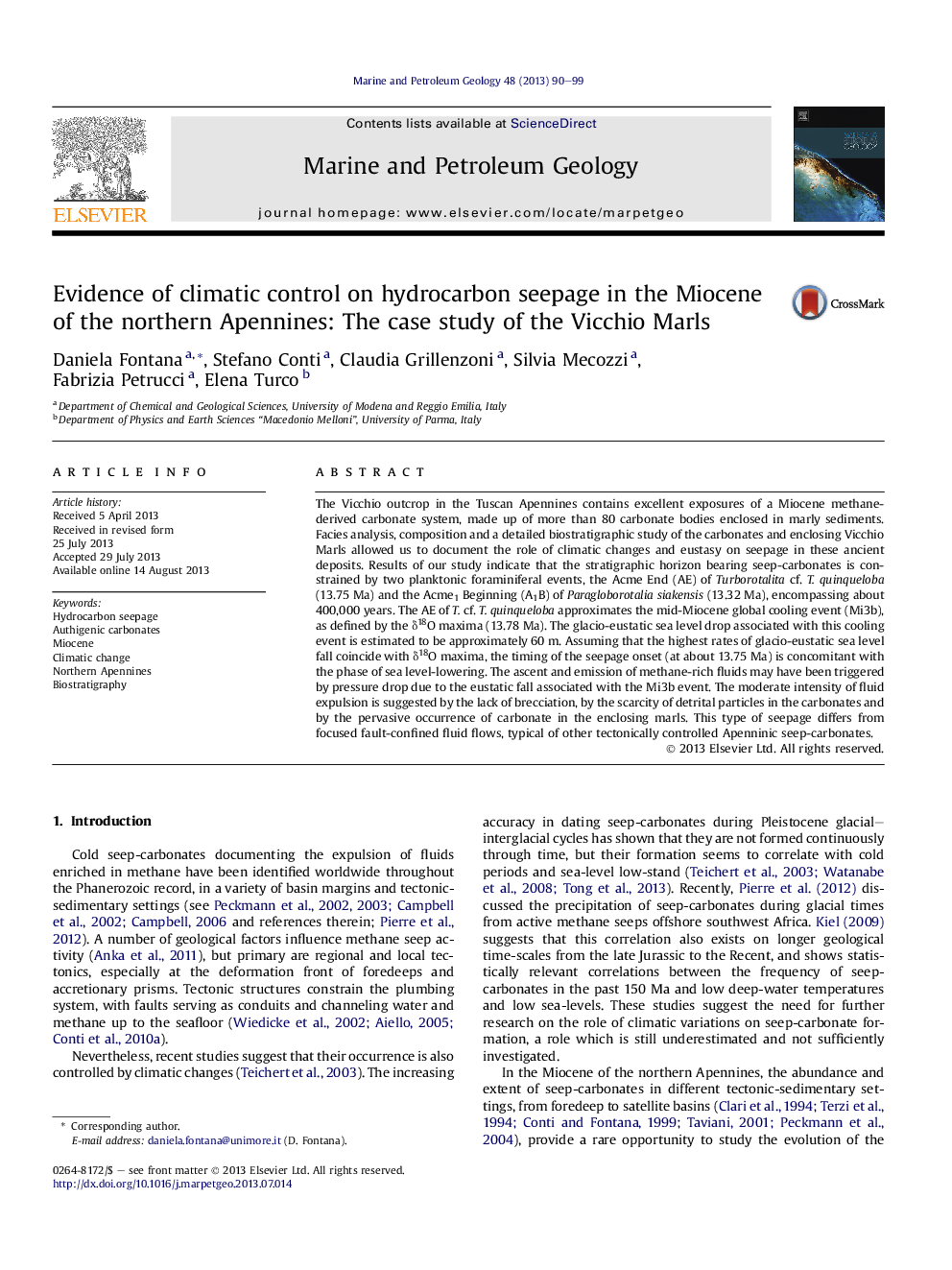 • Authigenic carbonates, d13C-depleted, are related to hydrocarbon seepage during the Miocene.
• Foraminiferal biostratigraphy permit to constrain the timing of seepage activity (from 13.75 to 13.32 Ma).
• The onset of the seep-carbonate precipitation approximates the major step in the Middle Miocene global cooling Mi3b event.
• The emission of methane-rich fluids is triggered by the pressure drop due to the eustatic fall associated with the Mi3b event.

The Vicchio outcrop in the Tuscan Apennines contains excellent exposures of a Miocene methane-derived carbonate system, made up of more than 80 carbonate bodies enclosed in marly sediments. Facies analysis, composition and a detailed biostratigraphic study of the carbonates and enclosing Vicchio Marls allowed us to document the role of climatic changes and eustasy on seepage in these ancient deposits. Results of our study indicate that the stratigraphic horizon bearing seep-carbonates is constrained by two planktonic foraminiferal events, the Acme End (AE) of Turborotalita cf. T. quinqueloba (13.75 Ma) and the Acme1 Beginning (A1B) of Paragloborotalia siakensis (13.32 Ma), encompassing about 400,000 years. The AE of T. cf. T. quinqueloba approximates the mid-Miocene global cooling event (Mi3b), as defined by the δ18O maxima (13.78 Ma). The glacio-eustatic sea level drop associated with this cooling event is estimated to be approximately 60 m. Assuming that the highest rates of glacio-eustatic sea level fall coincide with δ18O maxima, the timing of the seepage onset (at about 13.75 Ma) is concomitant with the phase of sea level-lowering. The ascent and emission of methane-rich fluids may have been triggered by pressure drop due to the eustatic fall associated with the Mi3b event. The moderate intensity of fluid expulsion is suggested by the lack of brecciation, by the scarcity of detrital particles in the carbonates and by the pervasive occurrence of carbonate in the enclosing marls. This type of seepage differs from focused fault-confined fluid flows, typical of other tectonically controlled Apenninic seep-carbonates.