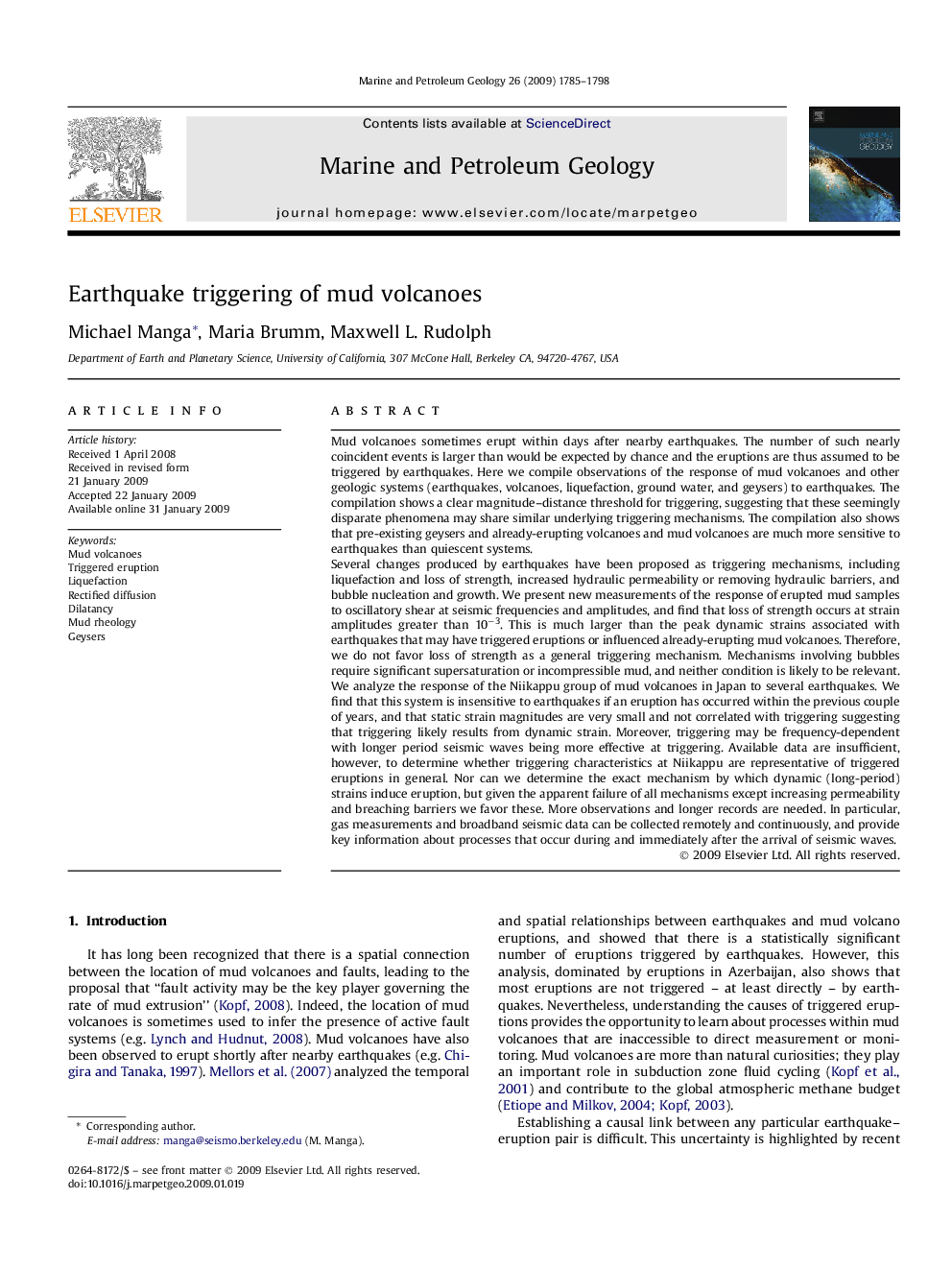 Mud volcanoes sometimes erupt within days after nearby earthquakes. The number of such nearly coincident events is larger than would be expected by chance and the eruptions are thus assumed to be triggered by earthquakes. Here we compile observations of the response of mud volcanoes and other geologic systems (earthquakes, volcanoes, liquefaction, ground water, and geysers) to earthquakes. The compilation shows a clear magnitude–distance threshold for triggering, suggesting that these seemingly disparate phenomena may share similar underlying triggering mechanisms. The compilation also shows that pre-existing geysers and already-erupting volcanoes and mud volcanoes are much more sensitive to earthquakes than quiescent systems.Several changes produced by earthquakes have been proposed as triggering mechanisms, including liquefaction and loss of strength, increased hydraulic permeability or removing hydraulic barriers, and bubble nucleation and growth. We present new measurements of the response of erupted mud samples to oscillatory shear at seismic frequencies and amplitudes, and find that loss of strength occurs at strain amplitudes greater than 10−3. This is much larger than the peak dynamic strains associated with earthquakes that may have triggered eruptions or influenced already-erupting mud volcanoes. Therefore, we do not favor loss of strength as a general triggering mechanism. Mechanisms involving bubbles require significant supersaturation or incompressible mud, and neither condition is likely to be relevant. We analyze the response of the Niikappu group of mud volcanoes in Japan to several earthquakes. We find that this system is insensitive to earthquakes if an eruption has occurred within the previous couple of years, and that static strain magnitudes are very small and not correlated with triggering suggesting that triggering likely results from dynamic strain. Moreover, triggering may be frequency-dependent with longer period seismic waves being more effective at triggering. Available data are insufficient, however, to determine whether triggering characteristics at Niikappu are representative of triggered eruptions in general. Nor can we determine the exact mechanism by which dynamic (long-period) strains induce eruption, but given the apparent failure of all mechanisms except increasing permeability and breaching barriers we favor these. More observations and longer records are needed. In particular, gas measurements and broadband seismic data can be collected remotely and continuously, and provide key information about processes that occur during and immediately after the arrival of seismic waves.