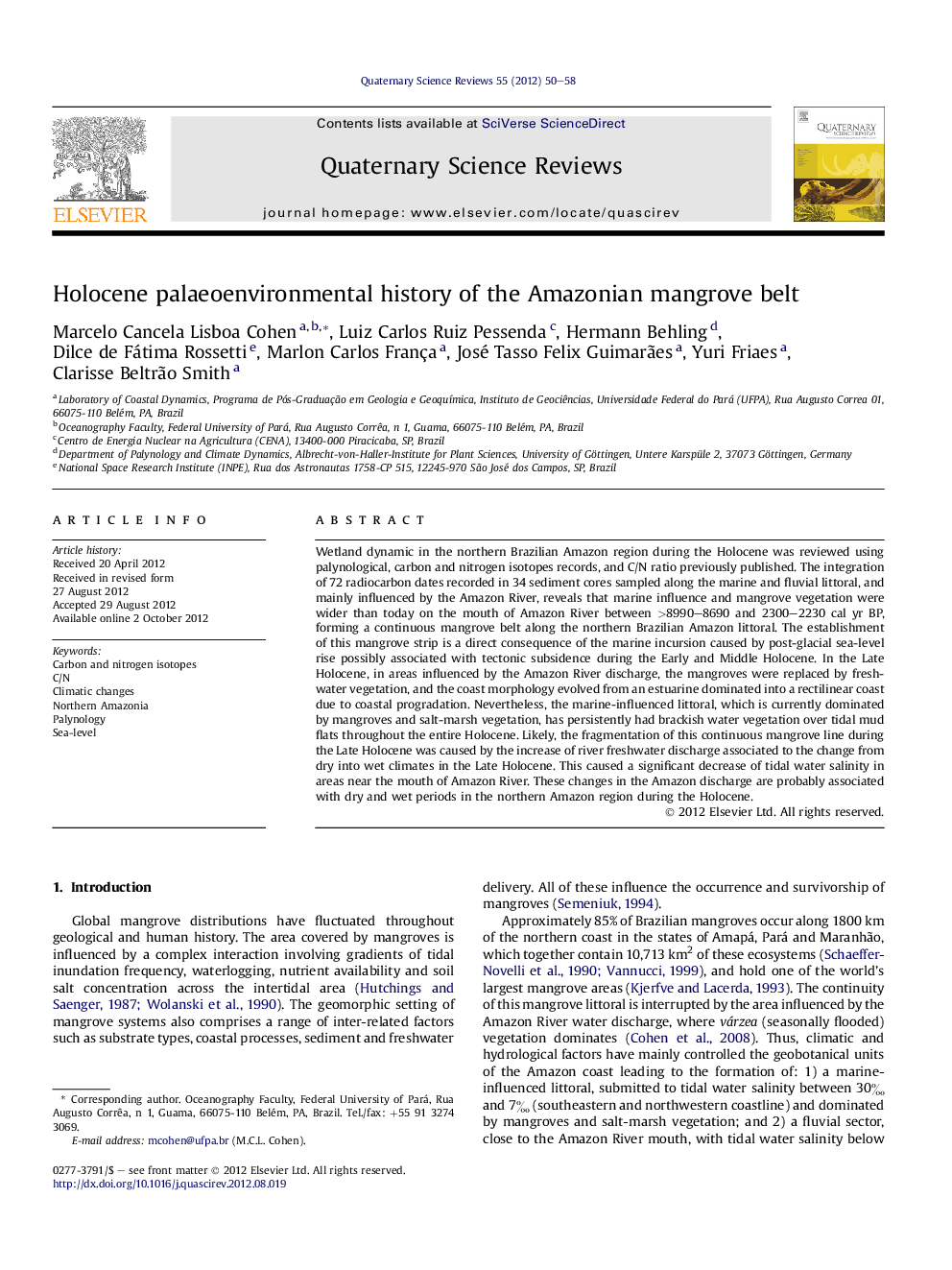 Wetland dynamic in the northern Brazilian Amazon region during the Holocene was reviewed using palynological, carbon and nitrogen isotopes records, and C/N ratio previously published. The integration of 72 radiocarbon dates recorded in 34 sediment cores sampled along the marine and fluvial littoral, and mainly influenced by the Amazon River, reveals that marine influence and mangrove vegetation were wider than today on the mouth of Amazon River between >8990–8690 and 2300–2230 cal yr BP, forming a continuous mangrove belt along the northern Brazilian Amazon littoral. The establishment of this mangrove strip is a direct consequence of the marine incursion caused by post-glacial sea-level rise possibly associated with tectonic subsidence during the Early and Middle Holocene. In the Late Holocene, in areas influenced by the Amazon River discharge, the mangroves were replaced by freshwater vegetation, and the coast morphology evolved from an estuarine dominated into a rectilinear coast due to coastal progradation. Nevertheless, the marine-influenced littoral, which is currently dominated by mangroves and salt-marsh vegetation, has persistently had brackish water vegetation over tidal mud flats throughout the entire Holocene. Likely, the fragmentation of this continuous mangrove line during the Late Holocene was caused by the increase of river freshwater discharge associated to the change from dry into wet climates in the Late Holocene. This caused a significant decrease of tidal water salinity in areas near the mouth of Amazon River. These changes in the Amazon discharge are probably associated with dry and wet periods in the northern Amazon region during the Holocene.

► Mangrove dynamics during the past 10,000 yr was studied by pollen, facies, δ13C and C/N.
► The Amazon mangrove belt is a consequence of the post-glacial sea-level rise.
► Marine influence was wider on the Amazon littoral between 8800 and 2250 cal yr BP.
► Mangroves were replaced by freshwater vegetation near the Amazon in the late Holocene.
► The fragmentation of the mangrove belt was caused by climatic changes.