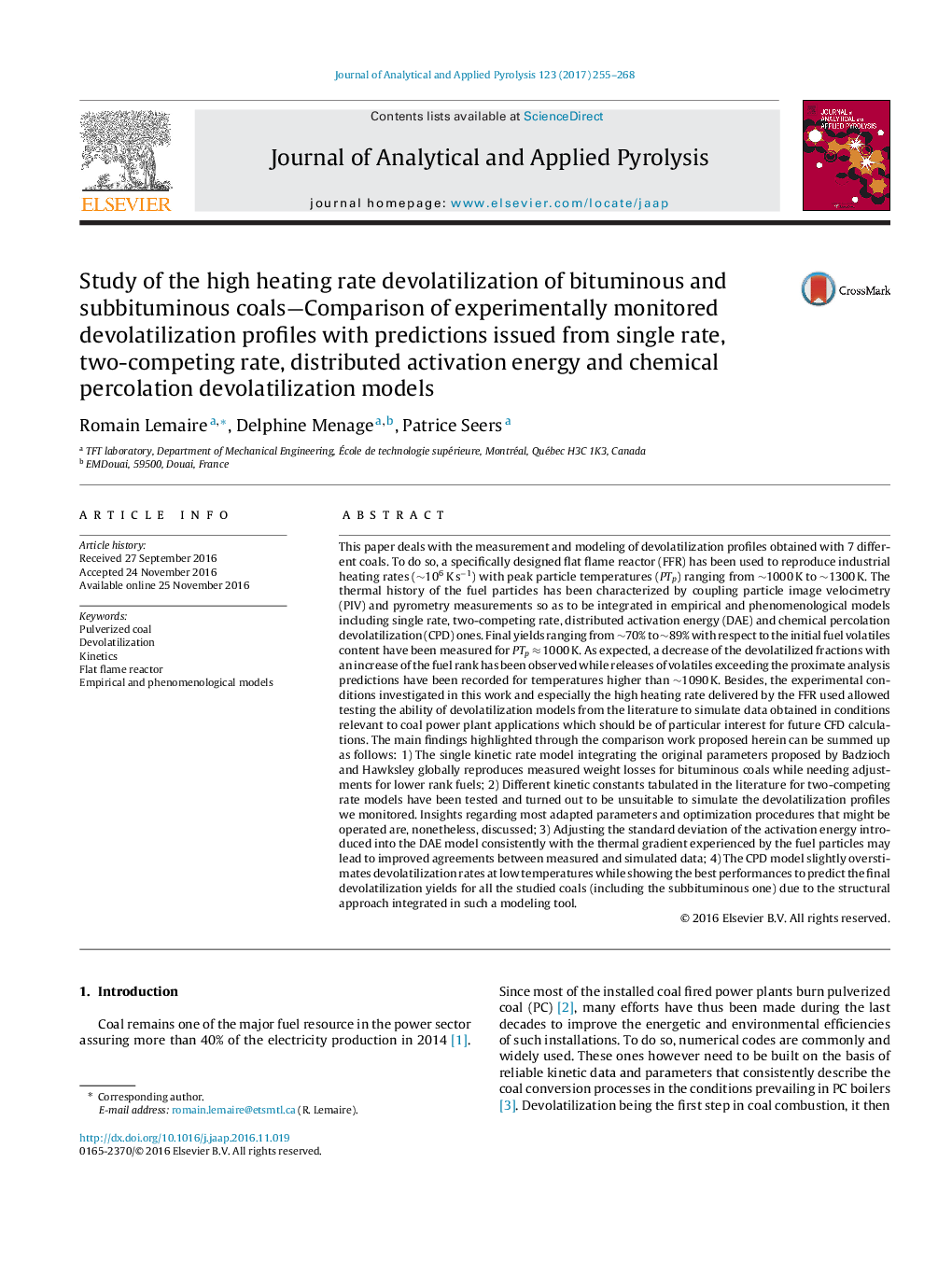 - The high heating rate devolatilization of 7 coals is analyzed in a flat flame reactor.
- Predictions of empirical and phenomenological models are compared with measurements.
- Sensitivity analyses focusing on the temperature and the fuel rank are proposed.
- Insights regarding the most suited modeling approaches are discussed.

This paper deals with the measurement and modeling of devolatilization profiles obtained with 7 different coals. To do so, a specifically designed flat flame reactor (FFR) has been used to reproduce industrial heating rates (â¼106Â KÂ sâ1) with peak particle temperatures (PTp) ranging from â¼1000Â K to â¼1300Â K. The thermal history of the fuel particles has been characterized by coupling particle image velocimetry (PIV) and pyrometry measurements so as to be integrated in empirical and phenomenological models including single rate, two-competing rate, distributed activation energy (DAE) and chemical percolation devolatilization (CPD) ones. Final yields ranging from â¼70% to â¼89% with respect to the initial fuel volatiles content have been measured for PTpÂ âÂ 1000Â K. As expected, a decrease of the devolatilized fractions with an increase of the fuel rank has been observed while releases of volatiles exceeding the proximate analysis predictions have been recorded for temperatures higher than â¼1090Â K. Besides, the experimental conditions investigated in this work and especially the high heating rate delivered by the FFR used allowed testing the ability of devolatilization models from the literature to simulate data obtained in conditions relevant to coal power plant applications which should be of particular interest for future CFD calculations. The main findings highlighted through the comparison work proposed herein can be summed up as follows: 1) The single kinetic rate model integrating the original parameters proposed by Badzioch and Hawksley globally reproduces measured weight losses for bituminous coals while needing adjustments for lower rank fuels; 2) Different kinetic constants tabulated in the literature for two-competing rate models have been tested and turned out to be unsuitable to simulate the devolatilization profiles we monitored. Insights regarding most adapted parameters and optimization procedures that might be operated are, nonetheless, discussed; 3) Adjusting the standard deviation of the activation energy introduced into the DAE model consistently with the thermal gradient experienced by the fuel particles may lead to improved agreements between measured and simulated data; 4) The CPD model slightly overstimates devolatilization rates at low temperatures while showing the best performances to predict the final devolatilization yields for all the studied coals (including the subbituminous one) due to the structural approach integrated in such a modeling tool.