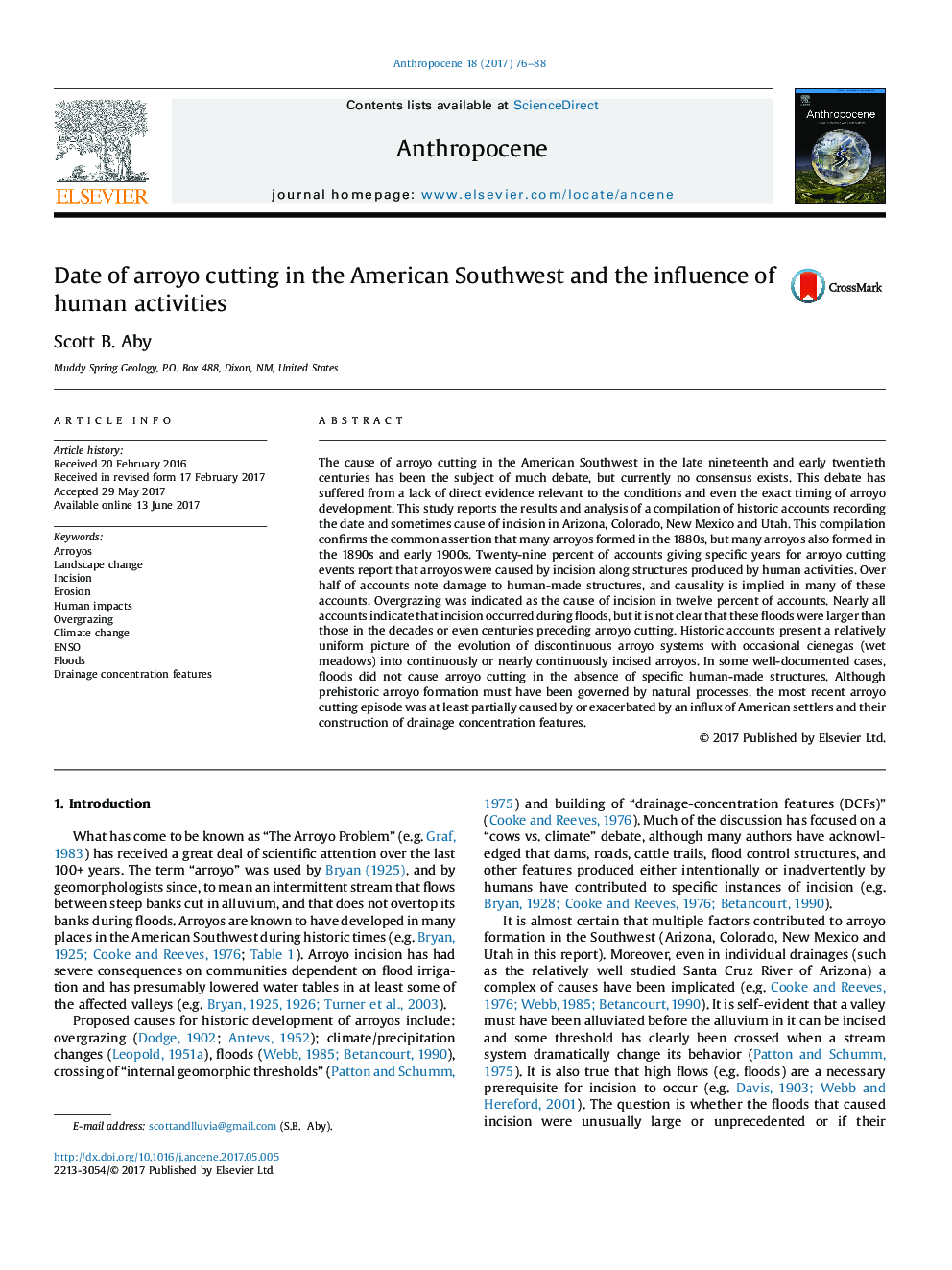 چکیده انگلیسی
The cause of arroyo cutting in the American Southwest in the late nineteenth and early twentieth centuries has been the subject of much debate, but currently no consensus exists. This debate has suffered from a lack of direct evidence relevant to the conditions and even the exact timing of arroyo development. This study reports the results and analysis of a compilation of historic accounts recording the date and sometimes cause of incision in Arizona, Colorado, New Mexico and Utah. This compilation confirms the common assertion that many arroyos formed in the 1880s, but many arroyos also formed in the 1890s and early 1900s. Twenty-nine percent of accounts giving specific years for arroyo cutting events report that arroyos were caused by incision along structures produced by human activities. Over half of accounts note damage to human-made structures, and causality is implied in many of these accounts. Overgrazing was indicated as the cause of incision in twelve percent of accounts. Nearly all accounts indicate that incision occurred during floods, but it is not clear that these floods were larger than those in the decades or even centuries preceding arroyo cutting. Historic accounts present a relatively uniform picture of the evolution of discontinuous arroyo systems with occasional cienegas (wet meadows) into continuously or nearly continuously incised arroyos. In some well-documented cases, floods did not cause arroyo cutting in the absence of specific human-made structures. Although prehistoric arroyo formation must have been governed by natural processes, the most recent arroyo cutting episode was at least partially caused by or exacerbated by an influx of American settlers and their construction of drainage concentration features.
ناشر
Database: Elsevier - ScienceDirect (ساینس دایرکت)
Journal: Anthropocene - Volume 18, June 2017, Pages 76-88
نویسندگان
Scott B. Aby,
دانلود مقاله + سفارش ترجمه
دانلود مقاله ISI انگلیسی
رایگان برای ایرانیان
سفارش ترجمه تخصصی
با تضمین قیمت و کیفیت
منتشر شده در