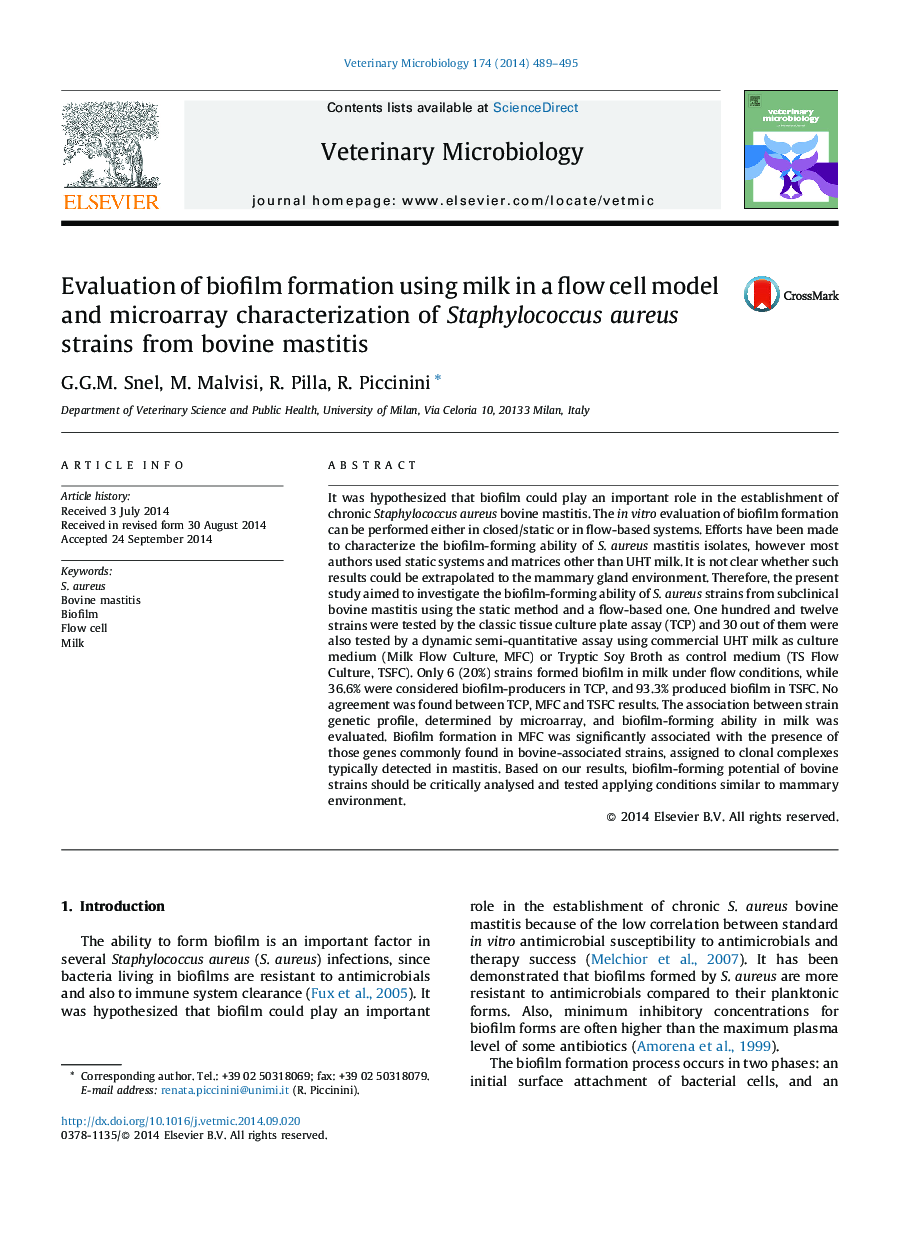 - We tested biofilm-producing capability of S. aureus strains from dairy cow mastitis.
- Different results were obtained in static or dynamic system and using broth or milk.
- A limited number of strains could produce biofilm in milk in the dynamic assay.
- Biofilm formation in milk was significantly correlated with bovine-adapted strains.

It was hypothesized that biofilm could play an important role in the establishment of chronic Staphylococcus aureus bovine mastitis. The in vitro evaluation of biofilm formation can be performed either in closed/static or in flow-based systems. Efforts have been made to characterize the biofilm-forming ability of S. aureus mastitis isolates, however most authors used static systems and matrices other than UHT milk. It is not clear whether such results could be extrapolated to the mammary gland environment. Therefore, the present study aimed to investigate the biofilm-forming ability of S. aureus strains from subclinical bovine mastitis using the static method and a flow-based one. One hundred and twelve strains were tested by the classic tissue culture plate assay (TCP) and 30 out of them were also tested by a dynamic semi-quantitative assay using commercial UHT milk as culture medium (Milk Flow Culture, MFC) or Tryptic Soy Broth as control medium (TS Flow Culture, TSFC). Only 6 (20%) strains formed biofilm in milk under flow conditions, while 36.6% were considered biofilm-producers in TCP, and 93.3% produced biofilm in TSFC. No agreement was found between TCP, MFC and TSFC results. The association between strain genetic profile, determined by microarray, and biofilm-forming ability in milk was evaluated. Biofilm formation in MFC was significantly associated with the presence of those genes commonly found in bovine-associated strains, assigned to clonal complexes typically detected in mastitis. Based on our results, biofilm-forming potential of bovine strains should be critically analysed and tested applying conditions similar to mammary environment.