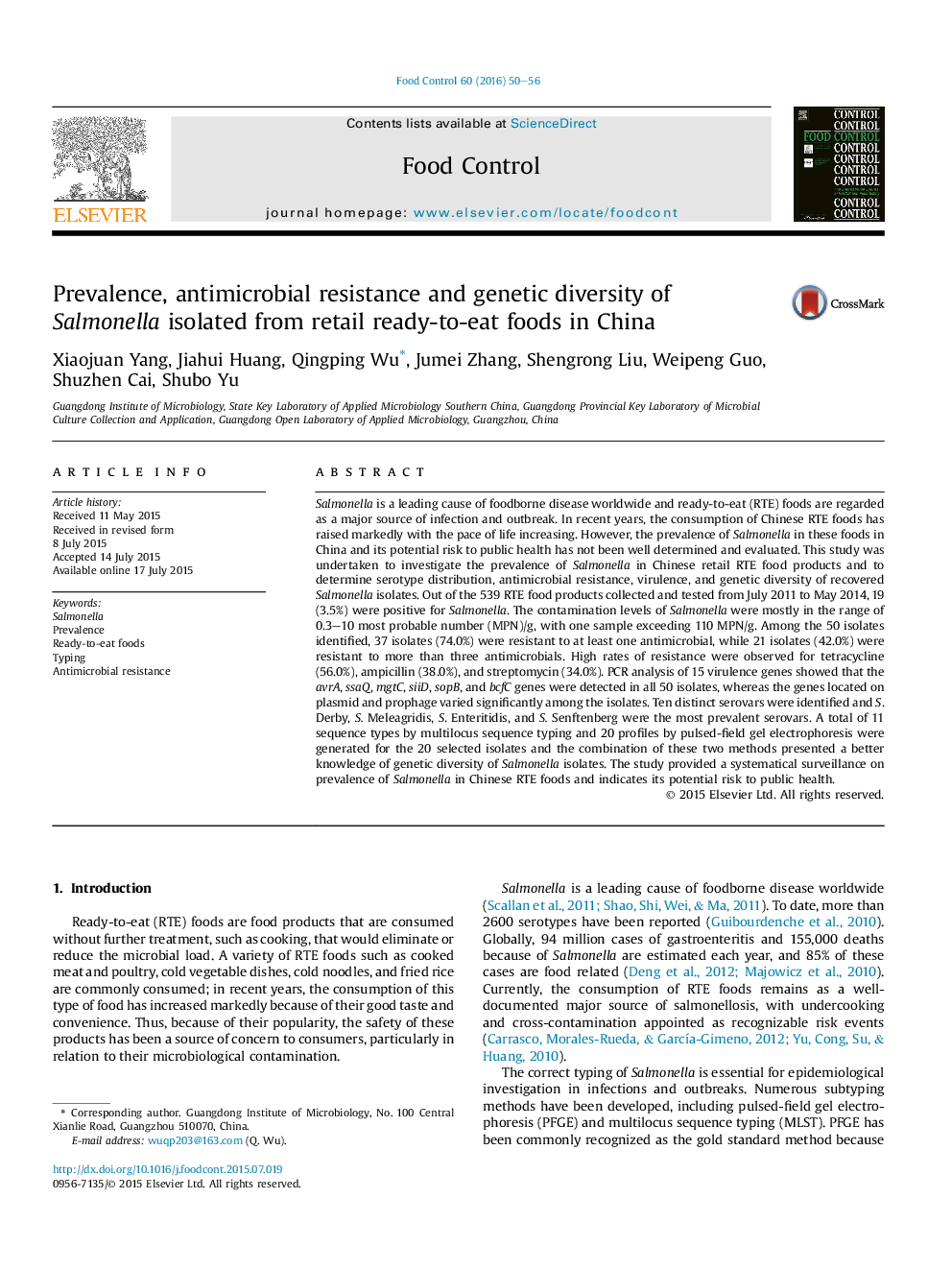 Salmonella is a leading cause of foodborne disease worldwide and ready-to-eat (RTE) foods are regarded as a major source of infection and outbreak. In recent years, the consumption of Chinese RTE foods has raised markedly with the pace of life increasing. However, the prevalence of Salmonella in these foods in China and its potential risk to public health has not been well determined and evaluated. This study was undertaken to investigate the prevalence of Salmonella in Chinese retail RTE food products and to determine serotype distribution, antimicrobial resistance, virulence, and genetic diversity of recovered Salmonella isolates. Out of the 539 RTE food products collected and tested from July 2011 to May 2014, 19 (3.5%) were positive for Salmonella. The contamination levels of Salmonella were mostly in the range of 0.3-10 most probable number (MPN)/g, with one sample exceeding 110Â MPN/g. Among the 50 isolates identified, 37 isolates (74.0%) were resistant to at least one antimicrobial, while 21 isolates (42.0%) were resistant to more than three antimicrobials. High rates of resistance were observed for tetracycline (56.0%), ampicillin (38.0%), and streptomycin (34.0%). PCR analysis of 15 virulence genes showed that the avrA, ssaQ, mgtC, siiD, sopB, and bcfC genes were detected in all 50 isolates, whereas the genes located on plasmid and prophage varied significantly among the isolates. Ten distinct serovars were identified and S. Derby, S. Meleagridis, S. Enteritidis, and S. Senftenberg were the most prevalent serovars. A total of 11 sequence types by multilocus sequence typing and 20 profiles by pulsed-field gel electrophoresis were generated for the 20 selected isolates and the combination of these two methods presented a better knowledge of genetic diversity of Salmonella isolates. The study provided a systematical surveillance on prevalence of Salmonella in Chinese RTE foods and indicates its potential risk to public health.