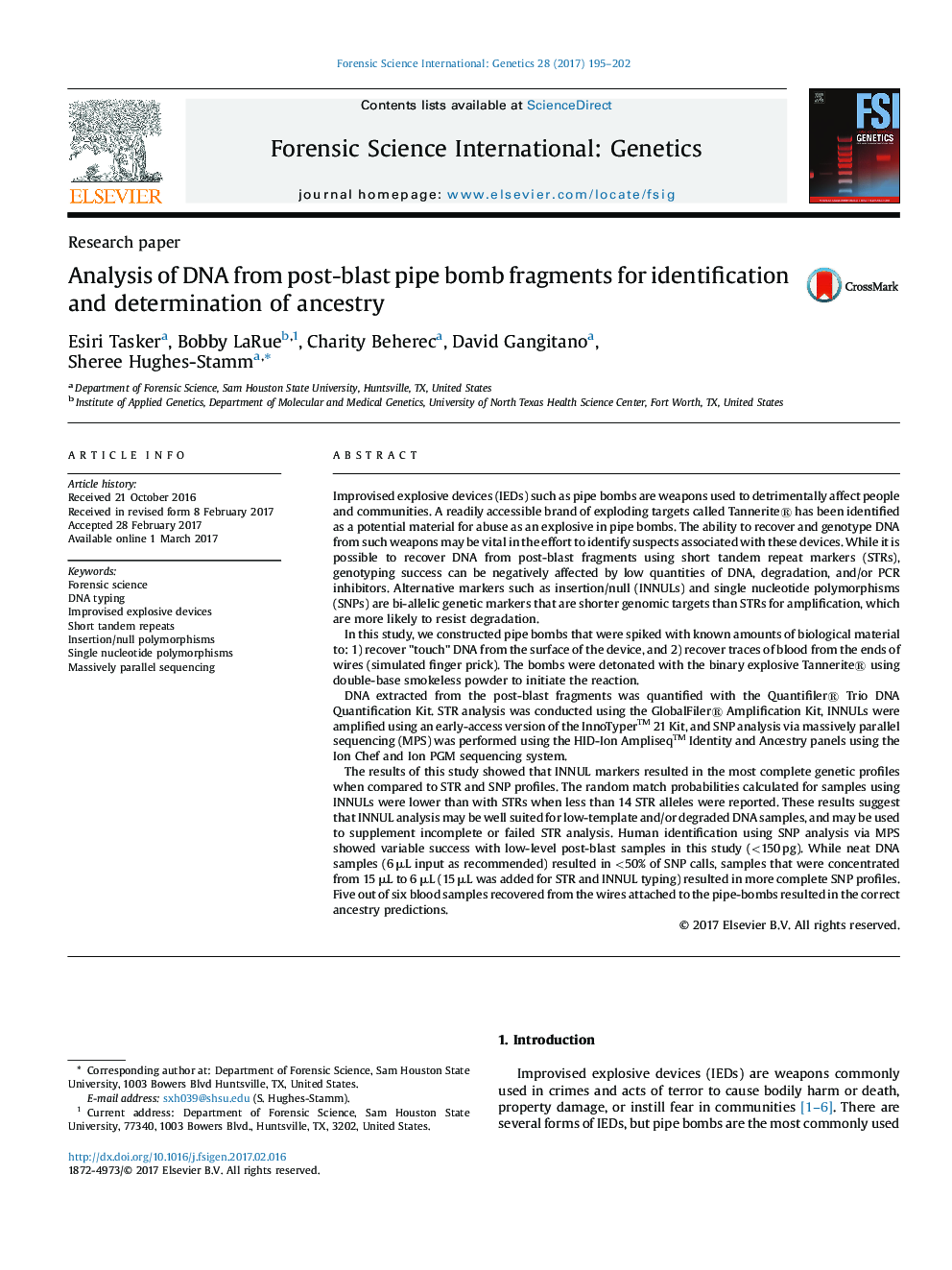 Improvised explosive devices (IEDs) such as pipe bombs are weapons used to detrimentally affect people and communities. A readily accessible brand of exploding targets called Tannerite® has been identified as a potential material for abuse as an explosive in pipe bombs. The ability to recover and genotype DNA from such weapons may be vital in the effort to identify suspects associated with these devices. While it is possible to recover DNA from post-blast fragments using short tandem repeat markers (STRs), genotyping success can be negatively affected by low quantities of DNA, degradation, and/or PCR inhibitors. Alternative markers such as insertion/null (INNULs) and single nucleotide polymorphisms (SNPs) are bi-allelic genetic markers that are shorter genomic targets than STRs for amplification, which are more likely to resist degradation.In this study, we constructed pipe bombs that were spiked with known amounts of biological material to: 1) recover "touch" DNA from the surface of the device, and 2) recover traces of blood from the ends of wires (simulated finger prick). The bombs were detonated with the binary explosive Tannerite® using double-base smokeless powder to initiate the reaction.DNA extracted from the post-blast fragments was quantified with the Quantifiler® Trio DNA Quantification Kit. STR analysis was conducted using the GlobalFiler® Amplification Kit, INNULs were amplified using an early-access version of the InnoTyperâ ¢ 21 Kit, and SNP analysis via massively parallel sequencing (MPS) was performed using the HID-Ion Ampliseqâ ¢ Identity and Ancestry panels using the Ion Chef and Ion PGM sequencing system.The results of this study showed that INNUL markers resulted in the most complete genetic profiles when compared to STR and SNP profiles. The random match probabilities calculated for samples using INNULs were lower than with STRs when less than 14 STR alleles were reported. These results suggest that INNUL analysis may be well suited for low-template and/or degraded DNA samples, and may be used to supplement incomplete or failed STR analysis. Human identification using SNP analysis via MPS showed variable success with low-level post-blast samples in this study (<150Â pg). While neat DNA samples (6Â Î¼L input as recommended) resulted in <50% of SNP calls, samples that were concentrated from 15Â Î¼L to 6Â Î¼L (15Â Î¼L was added for STR and INNUL typing) resulted in more complete SNP profiles. Five out of six blood samples recovered from the wires attached to the pipe-bombs resulted in the correct ancestry predictions.