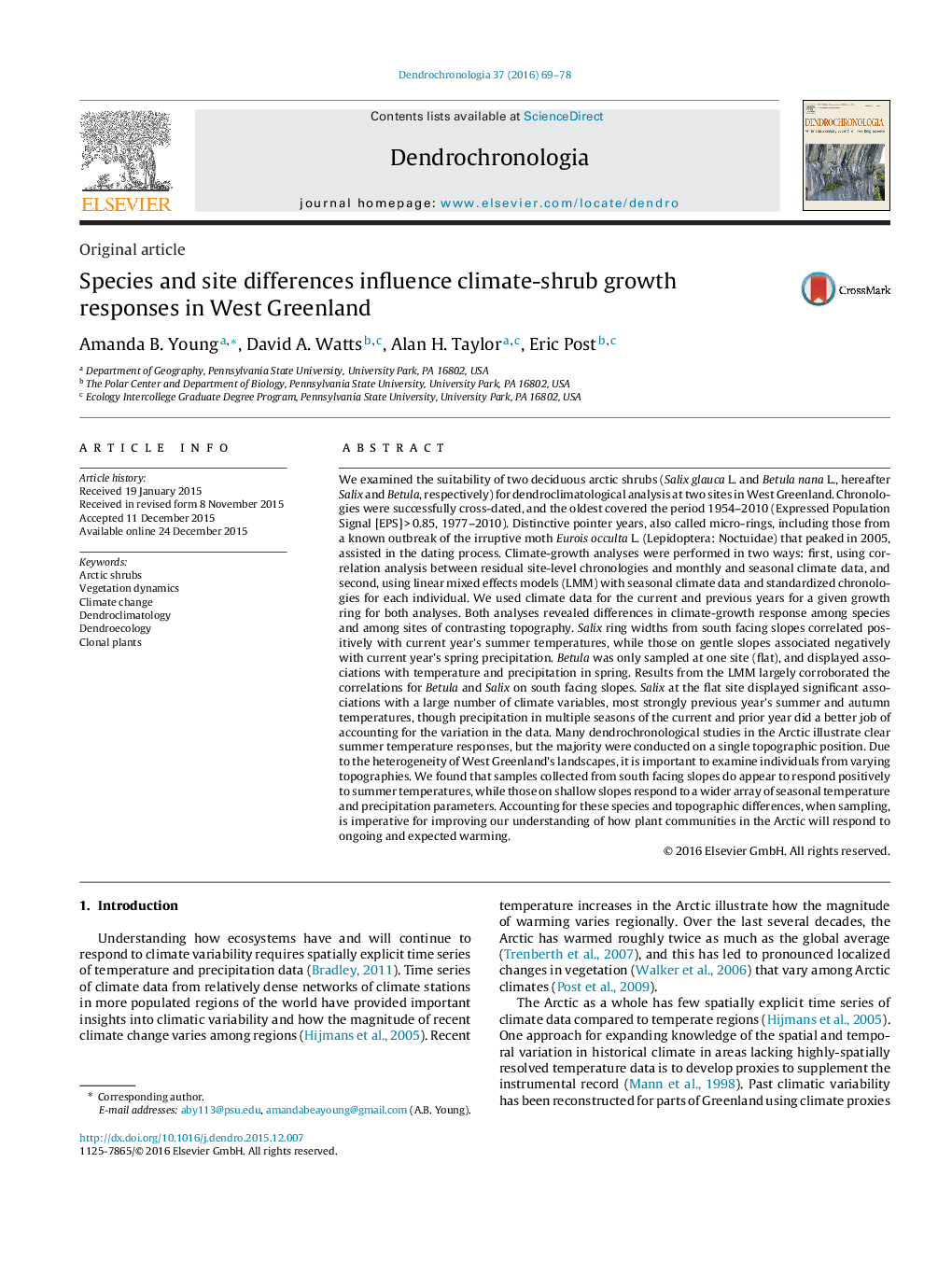 We examined the suitability of two deciduous arctic shrubs (Salix glauca L. and Betula nana L., hereafter Salix and Betula, respectively) for dendroclimatological analysis at two sites in West Greenland. Chronologies were successfully cross-dated, and the oldest covered the period 1954–2010 (Expressed Population Signal [EPS] > 0.85, 1977–2010). Distinctive pointer years, also called micro-rings, including those from a known outbreak of the irruptive moth Eurois occulta L. (Lepidoptera: Noctuidae) that peaked in 2005, assisted in the dating process. Climate-growth analyses were performed in two ways: first, using correlation analysis between residual site-level chronologies and monthly and seasonal climate data, and second, using linear mixed effects models (LMM) with seasonal climate data and standardized chronologies for each individual. We used climate data for the current and previous years for a given growth ring for both analyses. Both analyses revealed differences in climate-growth response among species and among sites of contrasting topography. Salix ring widths from south facing slopes correlated positively with current year’s summer temperatures, while those on gentle slopes associated negatively with current year’s spring precipitation. Betula was only sampled at one site (flat), and displayed associations with temperature and precipitation in spring. Results from the LMM largely corroborated the correlations for Betula and Salix on south facing slopes. Salix at the flat site displayed significant associations with a large number of climate variables, most strongly previous year’s summer and autumn temperatures, though precipitation in multiple seasons of the current and prior year did a better job of accounting for the variation in the data. Many dendrochronological studies in the Arctic illustrate clear summer temperature responses, but the majority were conducted on a single topographic position. Due to the heterogeneity of West Greenland’s landscapes, it is important to examine individuals from varying topographies. We found that samples collected from south facing slopes do appear to respond positively to summer temperatures, while those on shallow slopes respond to a wider array of seasonal temperature and precipitation parameters. Accounting for these species and topographic differences, when sampling, is imperative for improving our understanding of how plant communities in the Arctic will respond to ongoing and expected warming.