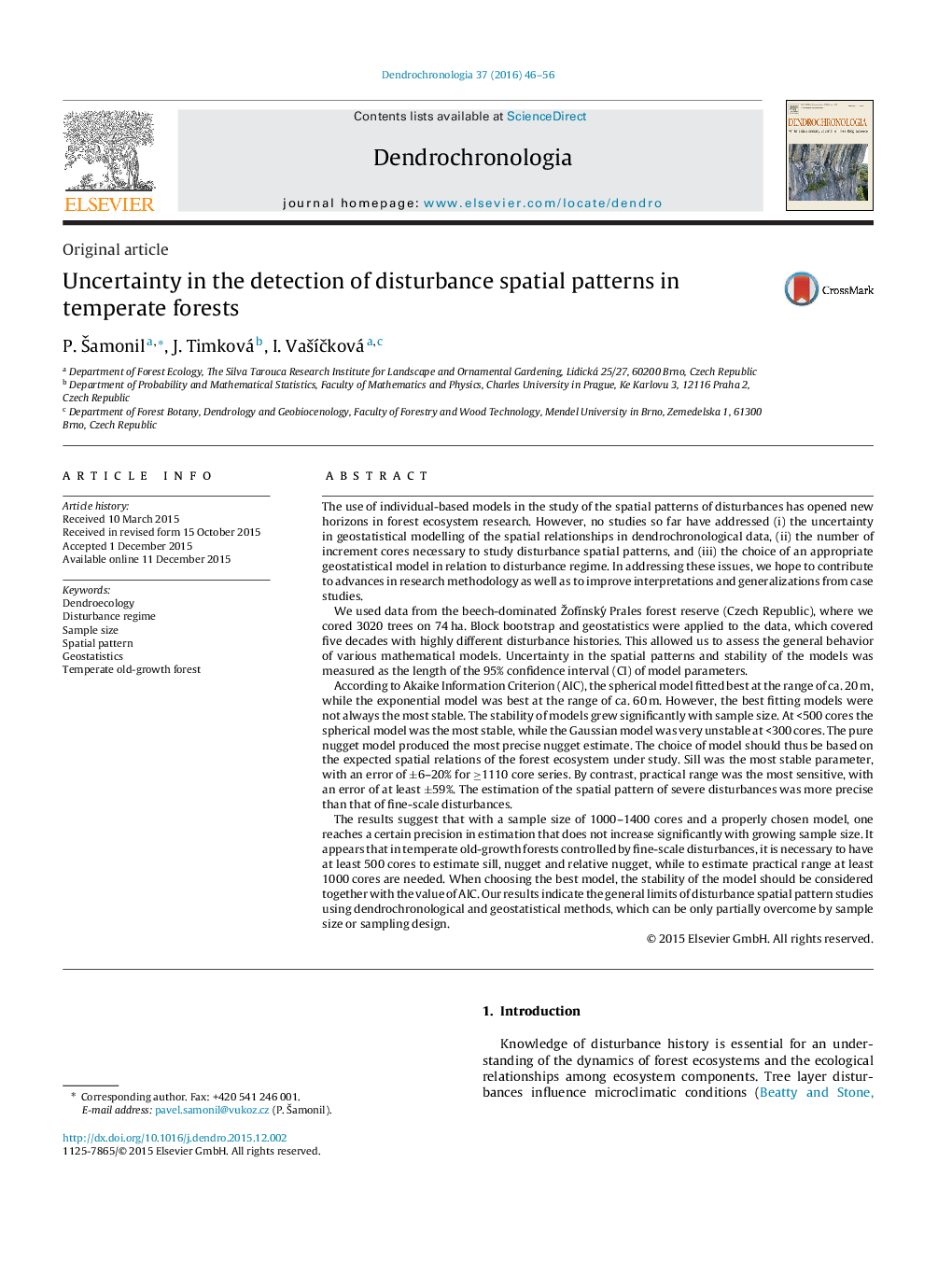 • The best fitting model did not always have the narrowest 95% confidence interval (CI).
• Stability of models (evaluated as the length of CI) increased with sample size.
• Increasing disturbance severity made evaluation of its spatial pattern more precise.
• Sill was the most stable parameter with an error of ±6–20% when using ≥1110 cores.
• Practical range was the most sensitive parameter, whose estimate error was ≥59%.

The use of individual-based models in the study of the spatial patterns of disturbances has opened new horizons in forest ecosystem research. However, no studies so far have addressed (i) the uncertainty in geostatistical modelling of the spatial relationships in dendrochronological data, (ii) the number of increment cores necessary to study disturbance spatial patterns, and (iii) the choice of an appropriate geostatistical model in relation to disturbance regime. In addressing these issues, we hope to contribute to advances in research methodology as well as to improve interpretations and generalizations from case studies.We used data from the beech-dominated Žofínský Prales forest reserve (Czech Republic), where we cored 3020 trees on 74 ha. Block bootstrap and geostatistics were applied to the data, which covered five decades with highly different disturbance histories. This allowed us to assess the general behavior of various mathematical models. Uncertainty in the spatial patterns and stability of the models was measured as the length of the 95% confidence interval (CI) of model parameters.According to Akaike Information Criterion (AIC), the spherical model fitted best at the range of ca. 20 m, while the exponential model was best at the range of ca. 60 m. However, the best fitting models were not always the most stable. The stability of models grew significantly with sample size. At <500 cores the spherical model was the most stable, while the Gaussian model was very unstable at <300 cores. The pure nugget model produced the most precise nugget estimate. The choice of model should thus be based on the expected spatial relations of the forest ecosystem under study. Sill was the most stable parameter, with an error of ±6–20% for ≥1110 core series. By contrast, practical range was the most sensitive, with an error of at least ±59%. The estimation of the spatial pattern of severe disturbances was more precise than that of fine-scale disturbances.The results suggest that with a sample size of 1000–1400 cores and a properly chosen model, one reaches a certain precision in estimation that does not increase significantly with growing sample size. It appears that in temperate old-growth forests controlled by fine-scale disturbances, it is necessary to have at least 500 cores to estimate sill, nugget and relative nugget, while to estimate practical range at least 1000 cores are needed. When choosing the best model, the stability of the model should be considered together with the value of AIC. Our results indicate the general limits of disturbance spatial pattern studies using dendrochronological and geostatistical methods, which can be only partially overcome by sample size or sampling design.