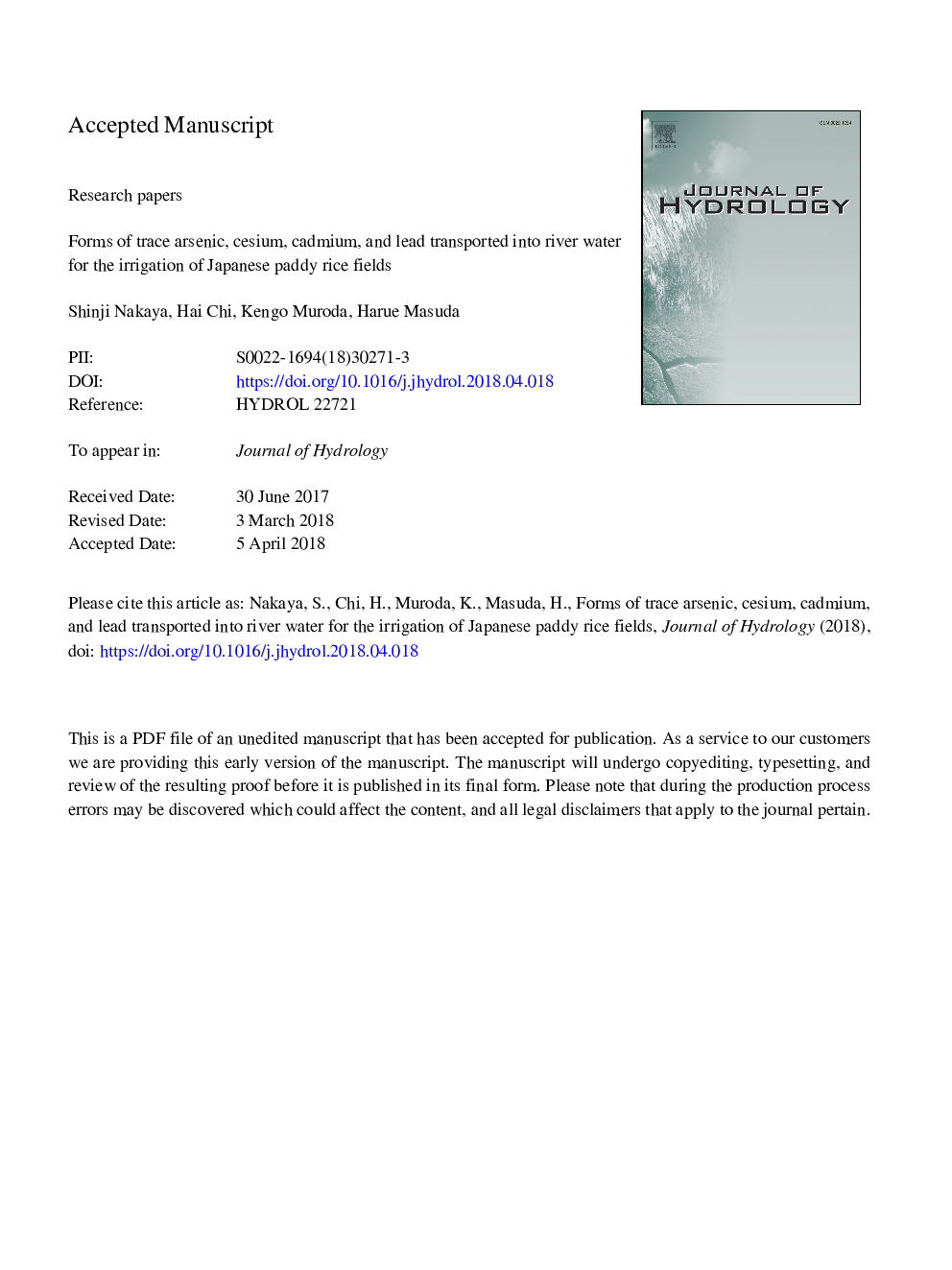 چکیده انگلیسی
In this study, we focus on the behavior of geogenic, toxic trace elements, particularly As, Cs, Cd, and Pb, during their transportation in two rivers for irrigation commonly used in monsoon Asia; one river originates from an active volcano, Mt. Asama, and the other originates from a currently inactive volcano, Yatsugatake Mountains in Nagano, Japan. These rivers were investigated to understand the role of river water as a pollutant of rice and other aquatic plants (via irrigation) and aquatic animals. The results indicated that the behavior of toxic trace elements in river water are likely controlled by their interactions with particulate Fe, Al, and Ti compounds. The majority of Pb and Cd is transported as particulate matter with Fe, Al, and Ti, while the majority of As is transported in the dissolved form, predominantly as arsenate, with low abundance of particulate matter. Cs is transported either as the dissolved form or as particulate matter in both rivers. The investigated elements are transported in the rivers as particulate and dissolved forms, and the ratio of these forms is controlled by the pH and presence of particulate Fe, Al, and Ti phases in the river water. With respect to Cs in both rivers, the parameter governing the concentration and transportation of Cs, in the bimodal form (i.e., particulate and dissolved forms), through the river possibly shifts from sorption to pH by particulate Fe-Al-Ti, according to the abrupt increase in the concentration of Cs in the river. The chemical attraction of particulate Fe-Al-Ti for Cs is weaker than that for Pb and Cd, indicating that the lower electronegativity of Cs weakens the chemical attraction on a colloid for the competitive sorption with the other trace elements. The different relationships between As and Fe in the river and in the irrigation water and soil water, as well as those in paddy rice, suggested that As in paddy rice is not directly derived from As in the irrigation water from the river under flooding.
ناشر
Database: Elsevier - ScienceDirect (ساینس دایرکت)
Journal: Journal of Hydrology - Volume 561, June 2018, Pages 335-347
نویسندگان
Shinji Nakaya, Hai Chi, Kengo Muroda, Harue Masuda,
دانلود مقاله + سفارش ترجمه
دانلود مقاله ISI انگلیسی
رایگان برای ایرانیان
سفارش ترجمه تخصصی
با تضمین قیمت و کیفیت
منتشر شده در