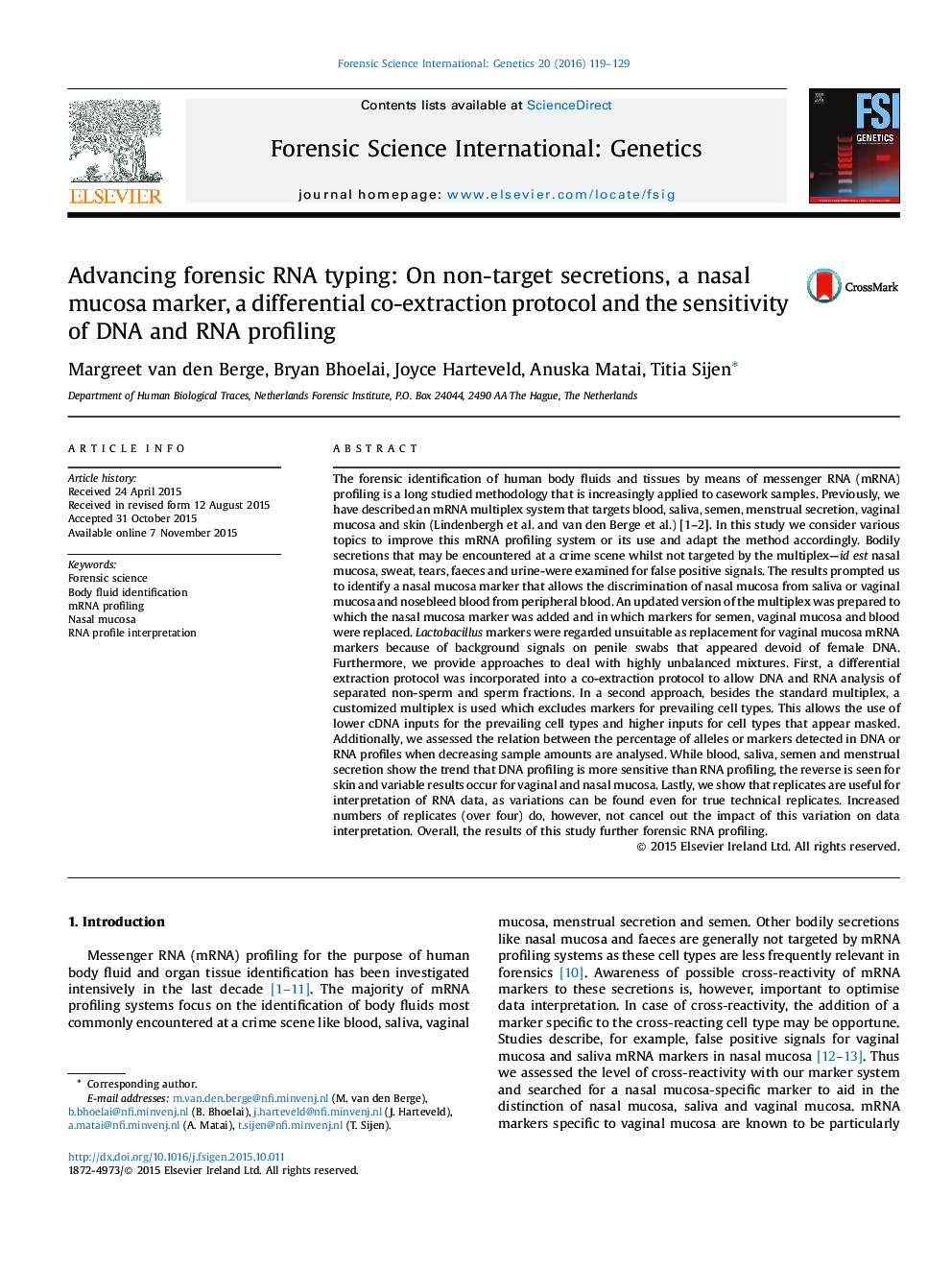 • A nasal mucosa marker is described.
• An overview of mRNA marker expression in non-target tissues is given.
• Microbial markers are assessed for their suitability to identify vaginal mucosa.
• Relative sensitivities of DNA and RNA profiling results are examined.
• Variability of mRNA marker detection in RNA profiling replicates is discussed.

The forensic identification of human body fluids and tissues by means of messenger RNA (mRNA) profiling is a long studied methodology that is increasingly applied to casework samples. Previously, we have described an mRNA multiplex system that targets blood, saliva, semen, menstrual secretion, vaginal mucosa and skin (Lindenbergh et al. and van den Berge et al.) [1–2]. In this study we consider various topics to improve this mRNA profiling system or its use and adapt the method accordingly. Bodily secretions that may be encountered at a crime scene whilst not targeted by the multiplex—id est nasal mucosa, sweat, tears, faeces and urine-were examined for false positive signals. The results prompted us to identify a nasal mucosa marker that allows the discrimination of nasal mucosa from saliva or vaginal mucosa and nosebleed blood from peripheral blood. An updated version of the multiplex was prepared to which the nasal mucosa marker was added and in which markers for semen, vaginal mucosa and blood were replaced. Lactobacillus markers were regarded unsuitable as replacement for vaginal mucosa mRNA markers because of background signals on penile swabs that appeared devoid of female DNA. Furthermore, we provide approaches to deal with highly unbalanced mixtures. First, a differential extraction protocol was incorporated into a co-extraction protocol to allow DNA and RNA analysis of separated non-sperm and sperm fractions. In a second approach, besides the standard multiplex, a customized multiplex is used which excludes markers for prevailing cell types. This allows the use of lower cDNA inputs for the prevailing cell types and higher inputs for cell types that appear masked. Additionally, we assessed the relation between the percentage of alleles or markers detected in DNA or RNA profiles when decreasing sample amounts are analysed. While blood, saliva, semen and menstrual secretion show the trend that DNA profiling is more sensitive than RNA profiling, the reverse is seen for skin and variable results occur for vaginal and nasal mucosa. Lastly, we show that replicates are useful for interpretation of RNA data, as variations can be found even for true technical replicates. Increased numbers of replicates (over four) do, however, not cancel out the impact of this variation on data interpretation. Overall, the results of this study further forensic RNA profiling.