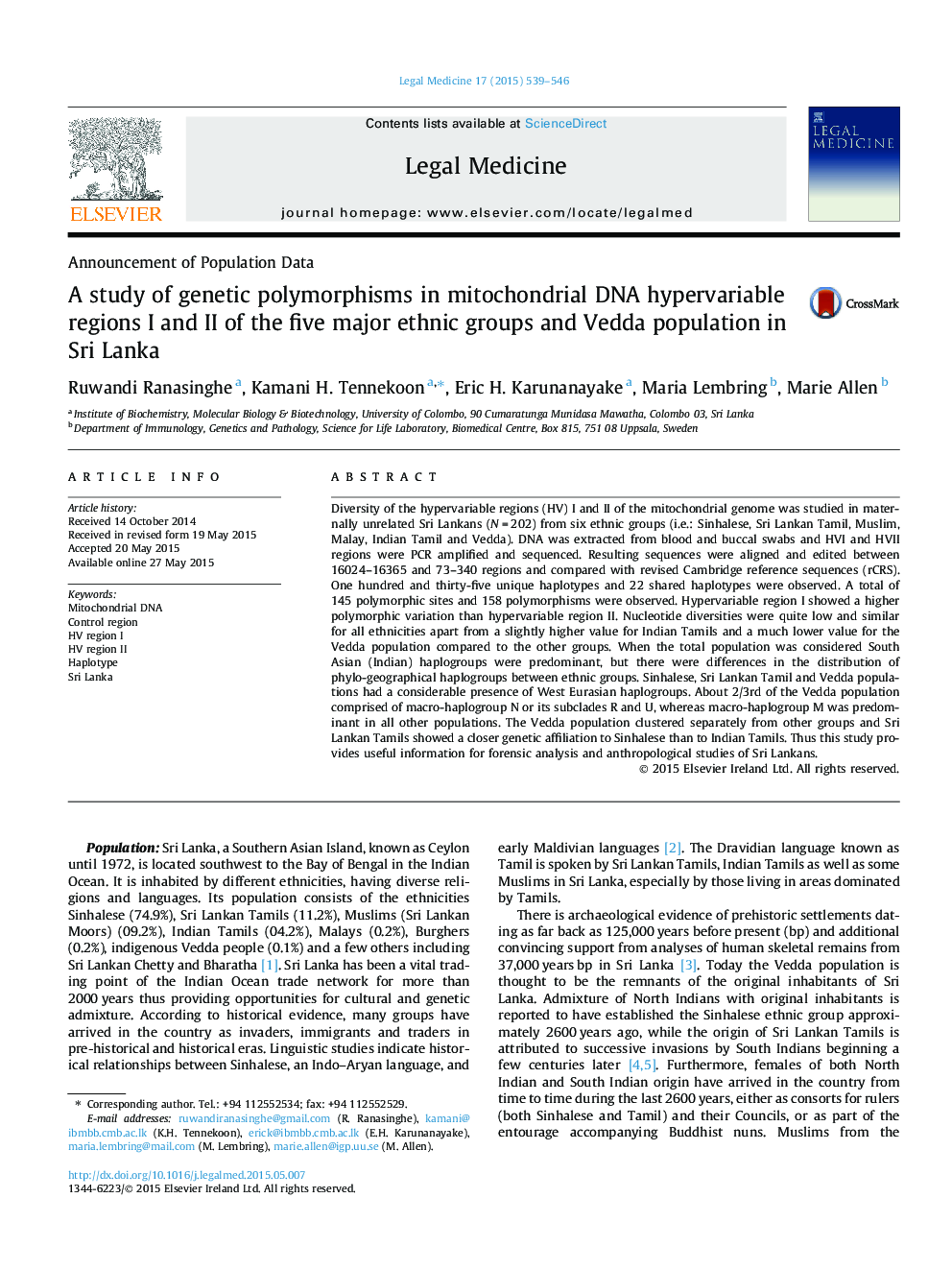 • mtDNA hypervariable regions I and II of Sri Lankans were sequenced and analysed.
• One hundred and thirty five unique and 22 shared haplotypes observed.
• Macro-haplogroup N was predominant among Vedda, remnants of original inhabitants.
• Sinhalese, Tamils, Malay and Muslims mainly belonged to M macro-haplogroup.
• Vedda clustered separately from other ethnic groups.

Diversity of the hypervariable regions (HV) I and II of the mitochondrial genome was studied in maternally unrelated Sri Lankans (N = 202) from six ethnic groups (i.e.: Sinhalese, Sri Lankan Tamil, Muslim, Malay, Indian Tamil and Vedda). DNA was extracted from blood and buccal swabs and HVI and HVII regions were PCR amplified and sequenced. Resulting sequences were aligned and edited between 16024–16365 and 73–340 regions and compared with revised Cambridge reference sequences (rCRS). One hundred and thirty-five unique haplotypes and 22 shared haplotypes were observed. A total of 145 polymorphic sites and 158 polymorphisms were observed. Hypervariable region I showed a higher polymorphic variation than hypervariable region II. Nucleotide diversities were quite low and similar for all ethnicities apart from a slightly higher value for Indian Tamils and a much lower value for the Vedda population compared to the other groups. When the total population was considered South Asian (Indian) haplogroups were predominant, but there were differences in the distribution of phylo-geographical haplogroups between ethnic groups. Sinhalese, Sri Lankan Tamil and Vedda populations had a considerable presence of West Eurasian haplogroups. About 2/3rd of the Vedda population comprised of macro-haplogroup N or its subclades R and U, whereas macro-haplogroup M was predominant in all other populations. The Vedda population clustered separately from other groups and Sri Lankan Tamils showed a closer genetic affiliation to Sinhalese than to Indian Tamils. Thus this study provides useful information for forensic analysis and anthropological studies of Sri Lankans.