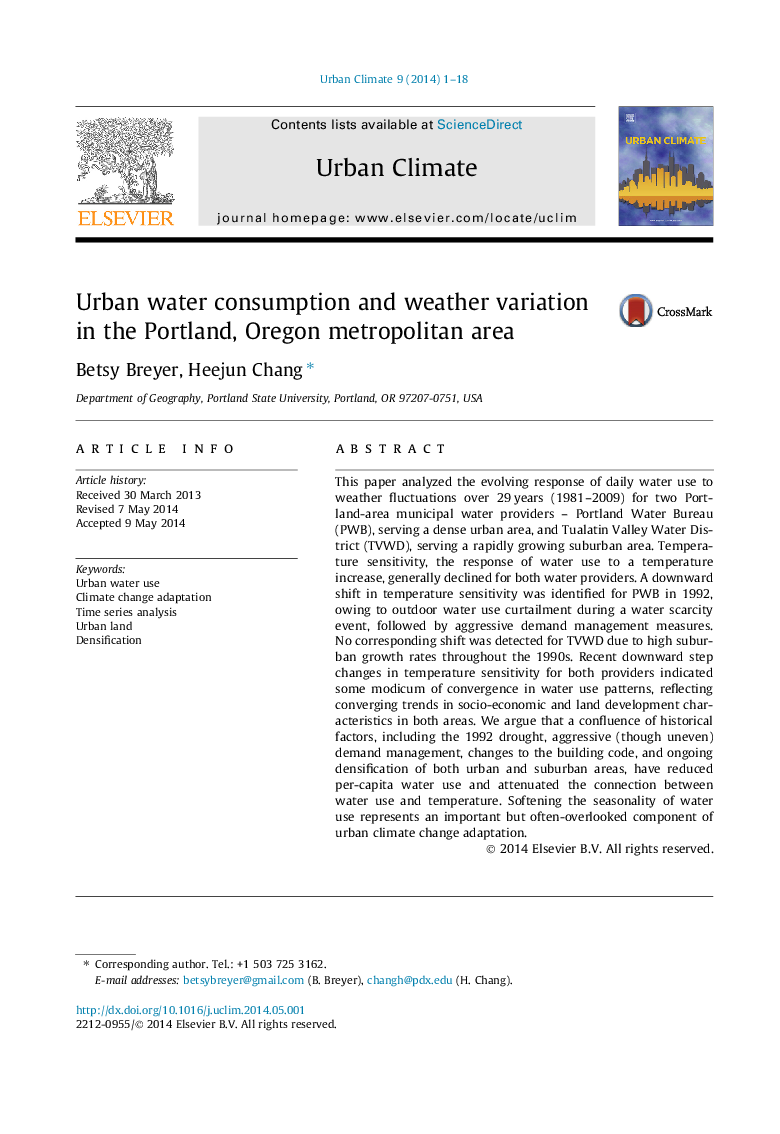 • We related daily urban and suburban water use to weather variation 1981–2009.
• Temperature responses to both base and seasonal use are falling.
• Temperature sensitivity drops immediately after the 1992 drought event in the urban water provider.
• 2009 Water demand mimics behavior under drought-induced water use restrictions in 1992.
• Water use patterns are converging due to a mix of suburban densification and water conservation policies.

This paper analyzed the evolving response of daily water use to weather fluctuations over 29 years (1981–2009) for two Portland-area municipal water providers – Portland Water Bureau (PWB), serving a dense urban area, and Tualatin Valley Water District (TVWD), serving a rapidly growing suburban area. Temperature sensitivity, the response of water use to a temperature increase, generally declined for both water providers. A downward shift in temperature sensitivity was identified for PWB in 1992, owing to outdoor water use curtailment during a water scarcity event, followed by aggressive demand management measures. No corresponding shift was detected for TVWD due to high suburban growth rates throughout the 1990s. Recent downward step changes in temperature sensitivity for both providers indicated some modicum of convergence in water use patterns, reflecting converging trends in socio-economic and land development characteristics in both areas. We argue that a confluence of historical factors, including the 1992 drought, aggressive (though uneven) demand management, changes to the building code, and ongoing densification of both urban and suburban areas, have reduced per-capita water use and attenuated the connection between water use and temperature. Softening the seasonality of water use represents an important but often-overlooked component of urban climate change adaptation.