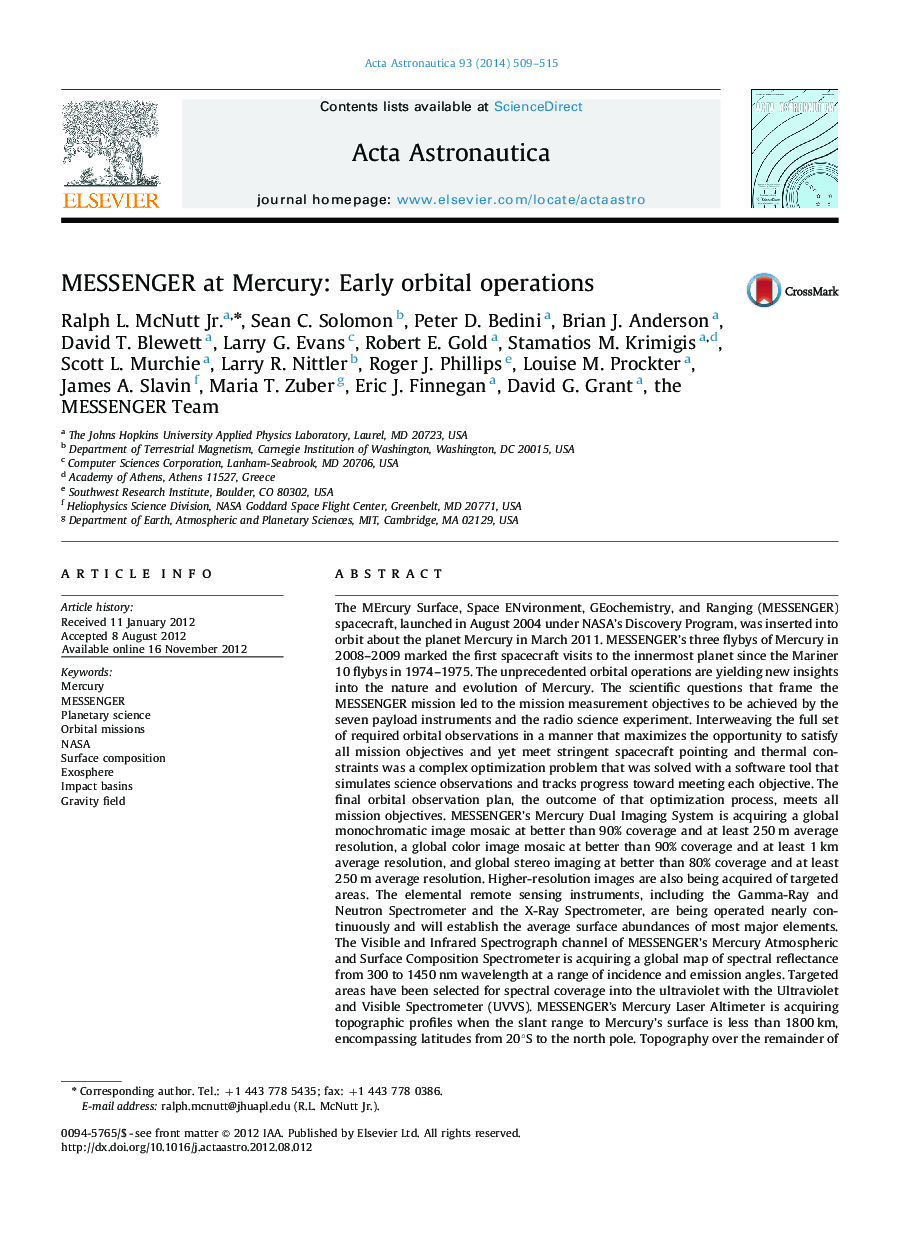 The MErcury Surface, Space ENvironment, GEochemistry, and Ranging (MESSENGER) spacecraft, launched in August 2004 under NASA's Discovery Program, was inserted into orbit about the planet Mercury in March 2011. MESSENGER's three flybys of Mercury in 2008–2009 marked the first spacecraft visits to the innermost planet since the Mariner 10 flybys in 1974–1975. The unprecedented orbital operations are yielding new insights into the nature and evolution of Mercury. The scientific questions that frame the MESSENGER mission led to the mission measurement objectives to be achieved by the seven payload instruments and the radio science experiment. Interweaving the full set of required orbital observations in a manner that maximizes the opportunity to satisfy all mission objectives and yet meet stringent spacecraft pointing and thermal constraints was a complex optimization problem that was solved with a software tool that simulates science observations and tracks progress toward meeting each objective. The final orbital observation plan, the outcome of that optimization process, meets all mission objectives. MESSENGER's Mercury Dual Imaging System is acquiring a global monochromatic image mosaic at better than 90% coverage and at least 250 m average resolution, a global color image mosaic at better than 90% coverage and at least 1 km average resolution, and global stereo imaging at better than 80% coverage and at least 250 m average resolution. Higher-resolution images are also being acquired of targeted areas. The elemental remote sensing instruments, including the Gamma-Ray and Neutron Spectrometer and the X-Ray Spectrometer, are being operated nearly continuously and will establish the average surface abundances of most major elements. The Visible and Infrared Spectrograph channel of MESSENGER's Mercury Atmospheric and Surface Composition Spectrometer is acquiring a global map of spectral reflectance from 300 to 1450 nm wavelength at a range of incidence and emission angles. Targeted areas have been selected for spectral coverage into the ultraviolet with the Ultraviolet and Visible Spectrometer (UVVS). MESSENGER's Mercury Laser Altimeter is acquiring topographic profiles when the slant range to Mercury's surface is less than 1800 km, encompassing latitudes from 20°S to the north pole. Topography over the remainder of the southern hemisphere will be derived from stereo imaging, radio occultations, and limb profiles. MESSENGER's radio science experiment is determining Mercury's gravity field from Doppler signals acquired during frequent downlinks. MESSENGER's Magnetometer is measuring the vector magnetic field both within Mercury's magnetosphere and in Mercury's solar wind environment at an instrument sampling rate of up to 20 samples/s. The UVVS is determining the three-dimensional, time-dependent distribution of Mercury's exospheric neutral and ionic species via their emission lines. During each spacecraft orbit, the Energetic Particle Spectrometer measures energetic electrons and ions, and the Fast Imaging Plasma Spectrometer measures the energies and mass per charge of thermal plasma components, both within Mercury's magnetosphere and in Mercury's solar-wind environment. The primary mission observation sequence will continue for one Earth year, until March 2012. An extended mission, currently under discussion with NASA, would add a second year of orbital observations targeting a set of focused follow-on questions that build on observations to date and take advantage of the more active Sun expected during 2012–2013. MESSENGER's total primary mission cost, projected at $446 M in real-year dollars, is comparable to that of Mariner 10 after adjustment for inflation.