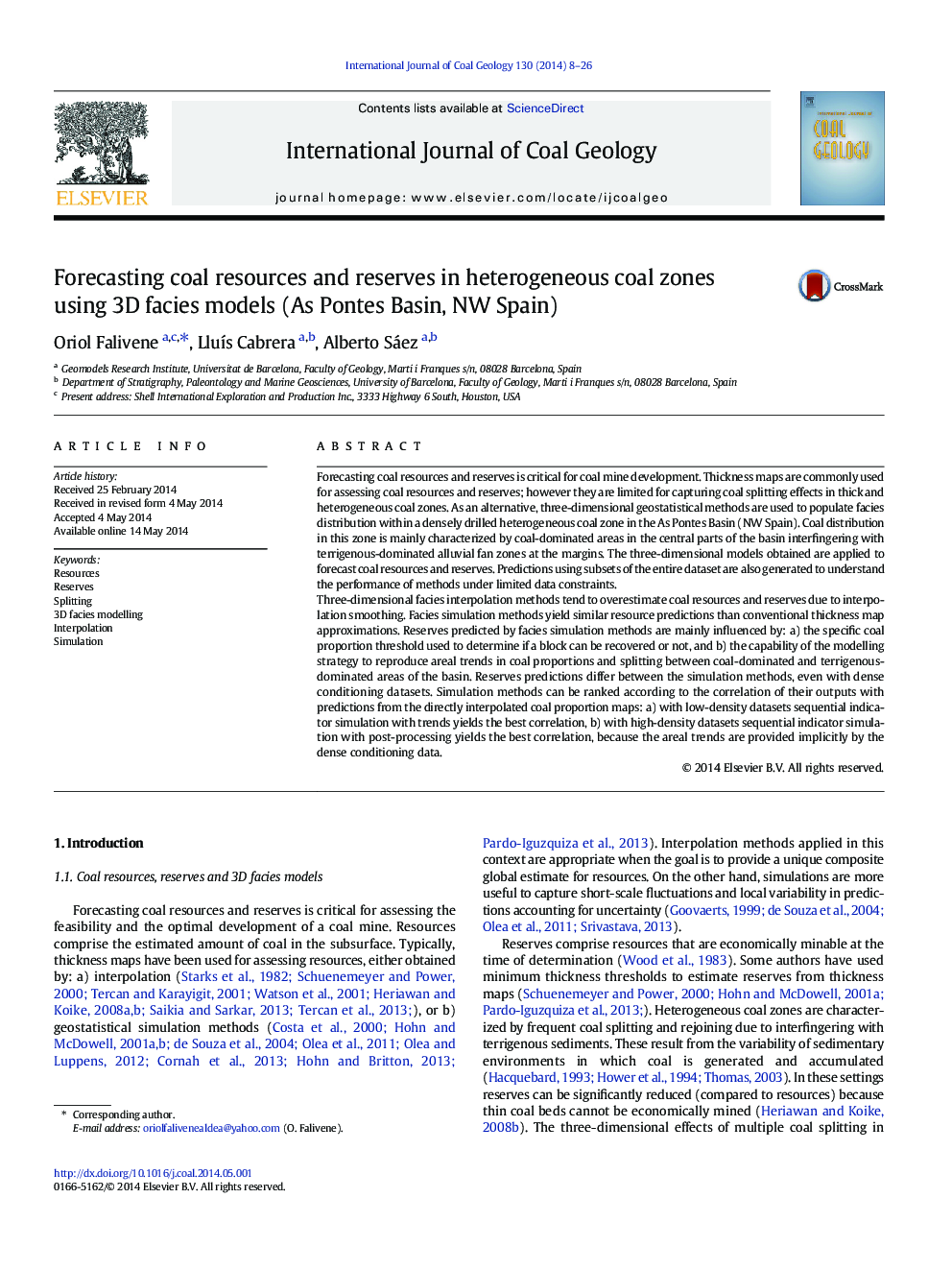 • Interpolation/simulation methods to reproduce facies distribution for a coal zone
• Coal dominates at the center and interfingers with terrigenous at the basin margins
• Models built with varying data density, and used to forecast resources and reserves
• Facies interpolation overestimates coal resources and reserves due to smoothing
• Differences in reserves related to methods capability to reproduce areal trends

Forecasting coal resources and reserves is critical for coal mine development. Thickness maps are commonly used for assessing coal resources and reserves; however they are limited for capturing coal splitting effects in thick and heterogeneous coal zones. As an alternative, three-dimensional geostatistical methods are used to populate facies distribution within a densely drilled heterogeneous coal zone in the As Pontes Basin (NW Spain). Coal distribution in this zone is mainly characterized by coal-dominated areas in the central parts of the basin interfingering with terrigenous-dominated alluvial fan zones at the margins. The three-dimensional models obtained are applied to forecast coal resources and reserves. Predictions using subsets of the entire dataset are also generated to understand the performance of methods under limited data constraints.Three-dimensional facies interpolation methods tend to overestimate coal resources and reserves due to interpolation smoothing. Facies simulation methods yield similar resource predictions than conventional thickness map approximations. Reserves predicted by facies simulation methods are mainly influenced by: a) the specific coal proportion threshold used to determine if a block can be recovered or not, and b) the capability of the modelling strategy to reproduce areal trends in coal proportions and splitting between coal-dominated and terrigenous-dominated areas of the basin. Reserves predictions differ between the simulation methods, even with dense conditioning datasets. Simulation methods can be ranked according to the correlation of their outputs with predictions from the directly interpolated coal proportion maps: a) with low-density datasets sequential indicator simulation with trends yields the best correlation, b) with high-density datasets sequential indicator simulation with post-processing yields the best correlation, because the areal trends are provided implicitly by the dense conditioning data.