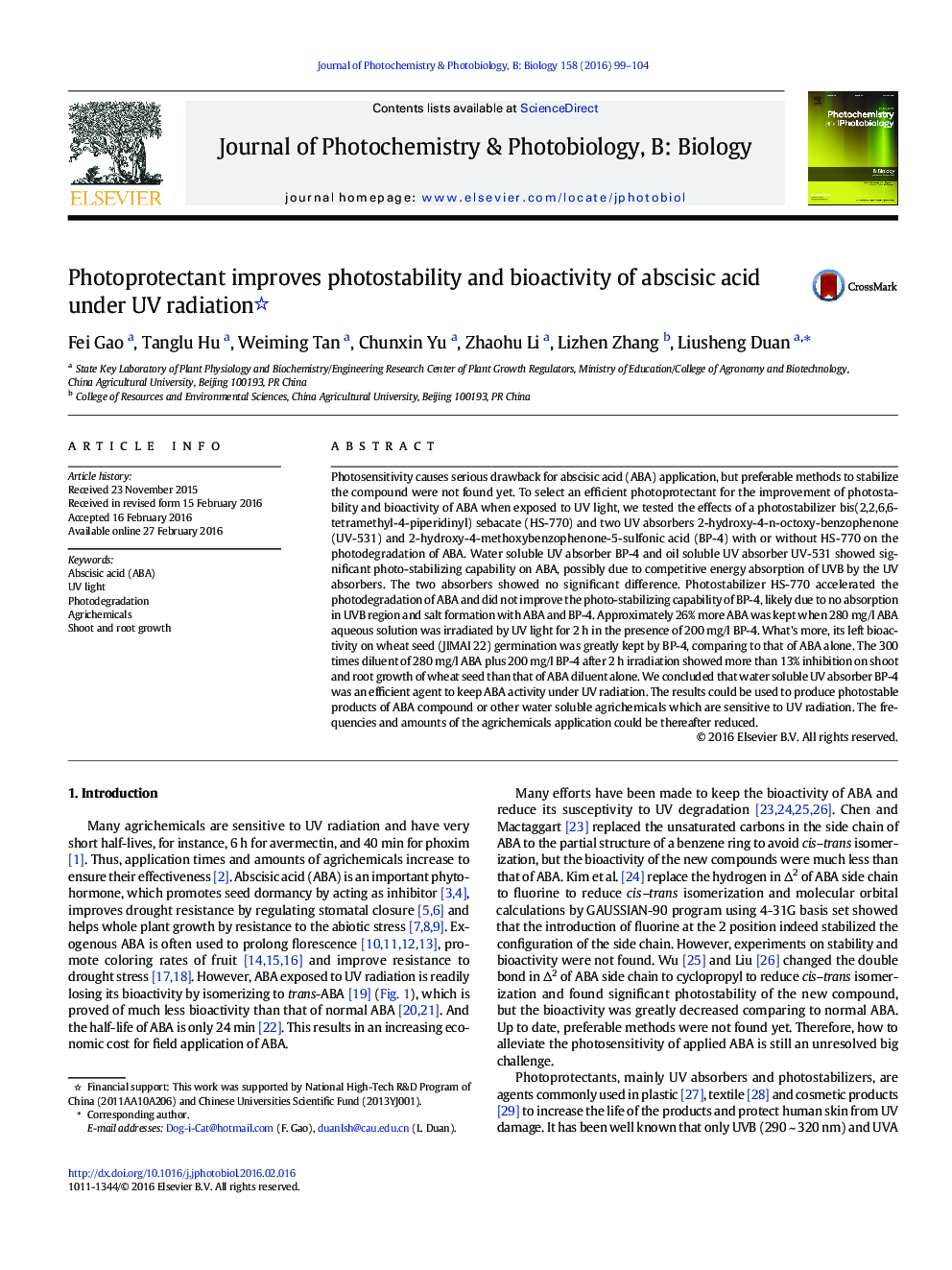 Photosensitivity causes serious drawback for abscisic acid (ABA) application, but preferable methods to stabilize the compound were not found yet. To select an efficient photoprotectant for the improvement of photostability and bioactivity of ABA when exposed to UV light, we tested the effects of a photostabilizer bis(2,2,6,6-tetramethyl-4-piperidinyl) sebacate (HS-770) and two UV absorbers 2-hydroxy-4-n-octoxy-benzophenone (UV-531) and 2-hydroxy-4-methoxybenzophenone-5-sulfonic acid (BP-4) with or without HS-770 on the photodegradation of ABA. Water soluble UV absorber BP-4 and oil soluble UV absorber UV-531 showed significant photo-stabilizing capability on ABA, possibly due to competitive energy absorption of UVB by the UV absorbers. The two absorbers showed no significant difference. Photostabilizer HS-770 accelerated the photodegradation of ABA and did not improve the photo-stabilizing capability of BP-4, likely due to no absorption in UVB region and salt formation with ABA and BP-4. Approximately 26% more ABA was kept when 280 mg/l ABA aqueous solution was irradiated by UV light for 2 h in the presence of 200 mg/l BP-4. What's more, its left bioactivity on wheat seed (JIMAI 22) germination was greatly kept by BP-4, comparing to that of ABA alone. The 300 times diluent of 280 mg/l ABA plus 200 mg/l BP-4 after 2 h irradiation showed more than 13% inhibition on shoot and root growth of wheat seed than that of ABA diluent alone. We concluded that water soluble UV absorber BP-4 was an efficient agent to keep ABA activity under UV radiation. The results could be used to produce photostable products of ABA compound or other water soluble agrichemicals which are sensitive to UV radiation. The frequencies and amounts of the agrichemicals application could be thereafter reduced.