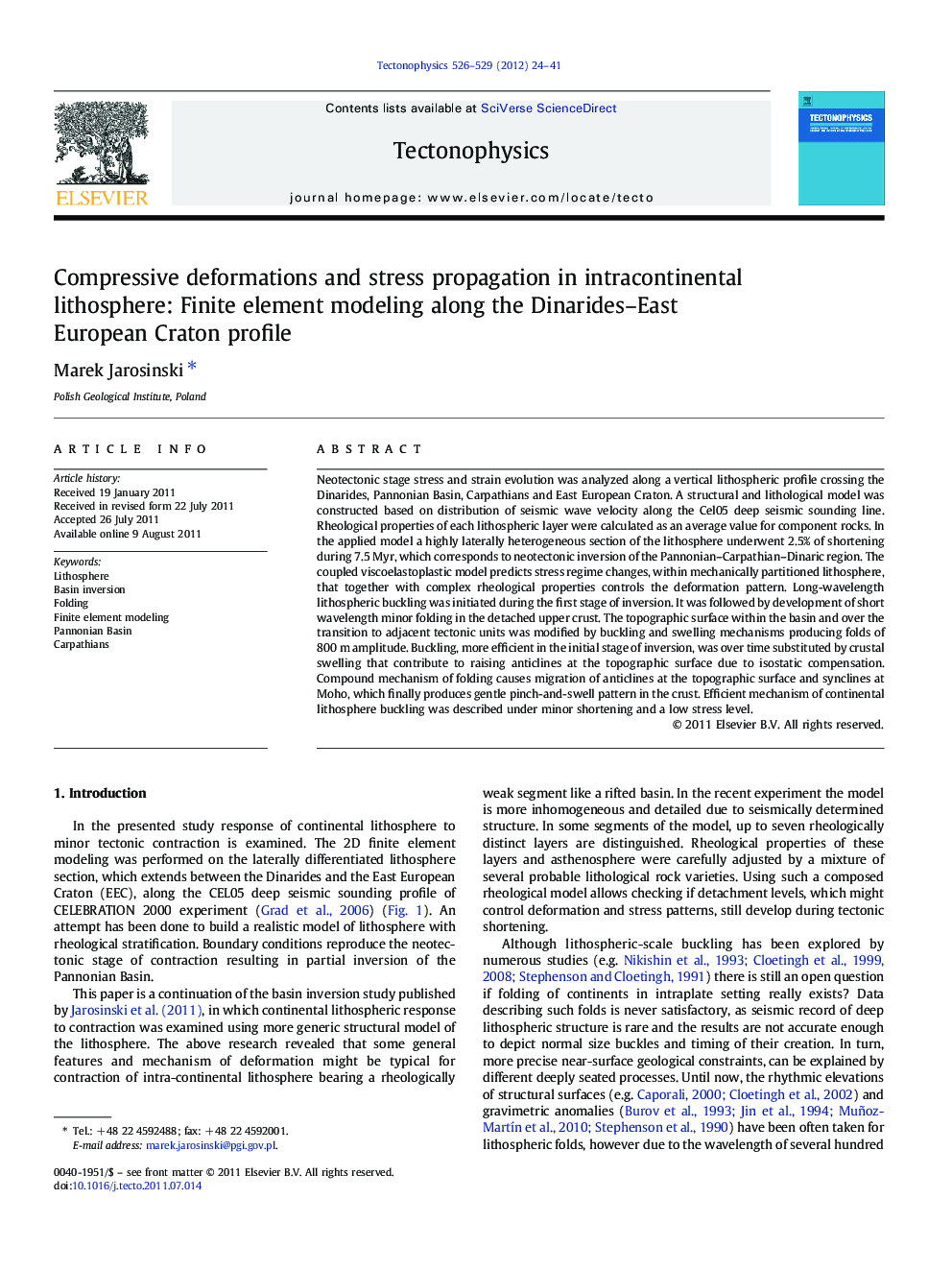 Neotectonic stage stress and strain evolution was analyzed along a vertical lithospheric profile crossing the Dinarides, Pannonian Basin, Carpathians and East European Craton. A structural and lithological model was constructed based on distribution of seismic wave velocity along the Cel05 deep seismic sounding line. Rheological properties of each lithospheric layer were calculated as an average value for component rocks. In the applied model a highly laterally heterogeneous section of the lithosphere underwent 2.5% of shortening during 7.5 Myr, which corresponds to neotectonic inversion of the Pannonian–Carpathian–Dinaric region. The coupled viscoelastoplastic model predicts stress regime changes, within mechanically partitioned lithosphere, that together with complex rheological properties controls the deformation pattern. Long-wavelength lithospheric buckling was initiated during the first stage of inversion. It was followed by development of short wavelength minor folding in the detached upper crust. The topographic surface within the basin and over the transition to adjacent tectonic units was modified by buckling and swelling mechanisms producing folds of 800 m amplitude. Buckling, more efficient in the initial stage of inversion, was over time substituted by crustal swelling that contribute to raising anticlines at the topographic surface due to isostatic compensation. Compound mechanism of folding causes migration of anticlines at the topographic surface and synclines at Moho, which finally produces gentle pinch-and-swell pattern in the crust. Efficient mechanism of continental lithosphere buckling was described under minor shortening and a low stress level.

► Mechanical reaction of heterogeneous intracontinental lithosphere to minor and moderate tectonic push was analyzed.
► Rheology of each lithospheric layer was calculated as a mean value for creep function parameters from several rock components.
► Three stages of weak segment inversion were defined by stress regime changes and characterized by different fold generations.
► It was analyzed, to what extend the presence of the weak segment controls the state of stress in adjacent stronger.
► The effectiveness of folding and interplay between buckling and swelling mechanism of topography building was discussed.