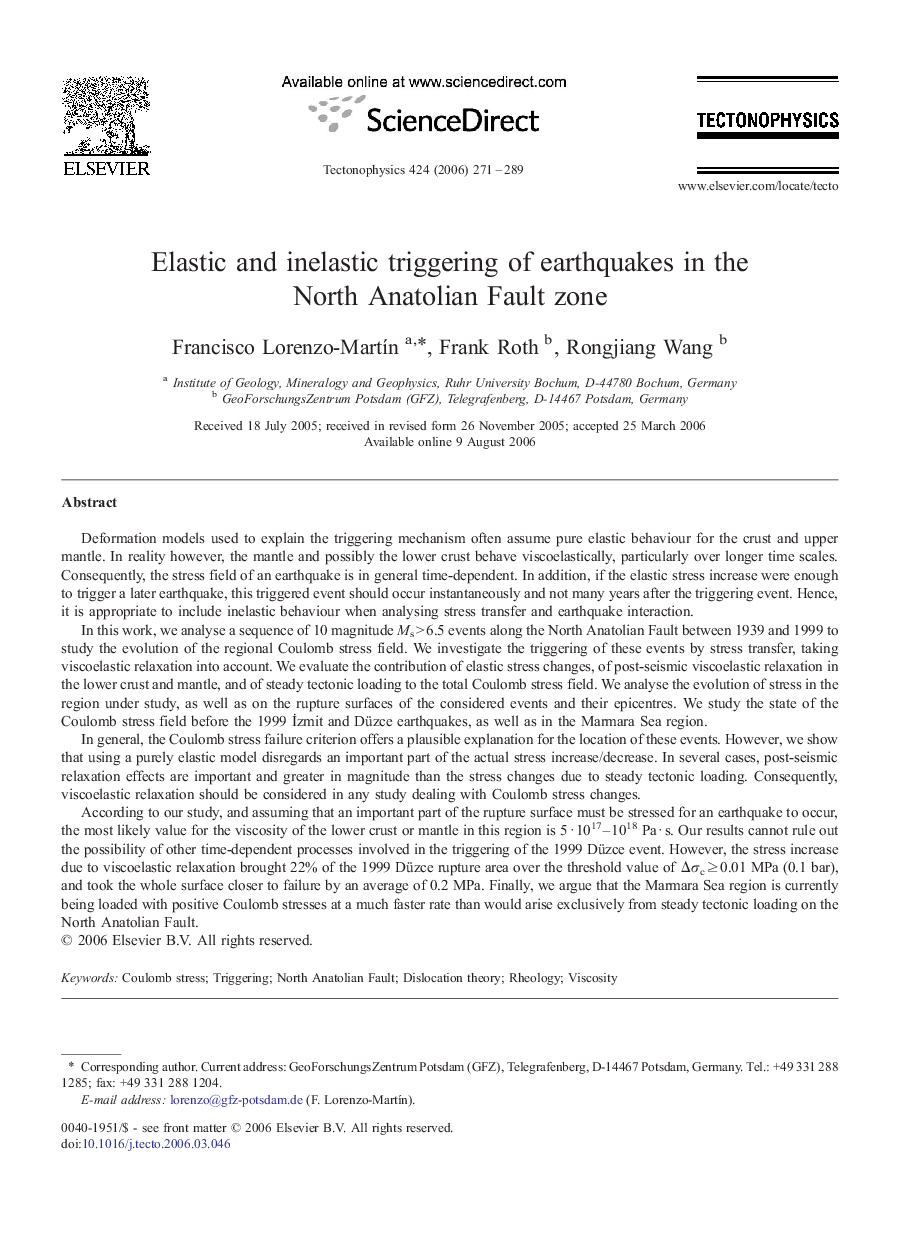 Deformation models used to explain the triggering mechanism often assume pure elastic behaviour for the crust and upper mantle. In reality however, the mantle and possibly the lower crust behave viscoelastically, particularly over longer time scales. Consequently, the stress field of an earthquake is in general time-dependent. In addition, if the elastic stress increase were enough to trigger a later earthquake, this triggered event should occur instantaneously and not many years after the triggering event. Hence, it is appropriate to include inelastic behaviour when analysing stress transfer and earthquake interaction.In this work, we analyse a sequence of 10 magnitude Ms > 6.5 events along the North Anatolian Fault between 1939 and 1999 to study the evolution of the regional Coulomb stress field. We investigate the triggering of these events by stress transfer, taking viscoelastic relaxation into account. We evaluate the contribution of elastic stress changes, of post-seismic viscoelastic relaxation in the lower crust and mantle, and of steady tectonic loading to the total Coulomb stress field. We analyse the evolution of stress in the region under study, as well as on the rupture surfaces of the considered events and their epicentres. We study the state of the Coulomb stress field before the 1999 İzmit and Düzce earthquakes, as well as in the Marmara Sea region.In general, the Coulomb stress failure criterion offers a plausible explanation for the location of these events. However, we show that using a purely elastic model disregards an important part of the actual stress increase/decrease. In several cases, post-seismic relaxation effects are important and greater in magnitude than the stress changes due to steady tectonic loading. Consequently, viscoelastic relaxation should be considered in any study dealing with Coulomb stress changes.According to our study, and assuming that an important part of the rupture surface must be stressed for an earthquake to occur, the most likely value for the viscosity of the lower crust or mantle in this region is 5 · 1017–1018 Pa · s. Our results cannot rule out the possibility of other time-dependent processes involved in the triggering of the 1999 Düzce event. However, the stress increase due to viscoelastic relaxation brought 22% of the 1999 Düzce rupture area over the threshold value of Δσc ≥ 0.01 MPa (0.1 bar), and took the whole surface closer to failure by an average of 0.2 MPa. Finally, we argue that the Marmara Sea region is currently being loaded with positive Coulomb stresses at a much faster rate than would arise exclusively from steady tectonic loading on the North Anatolian Fault.