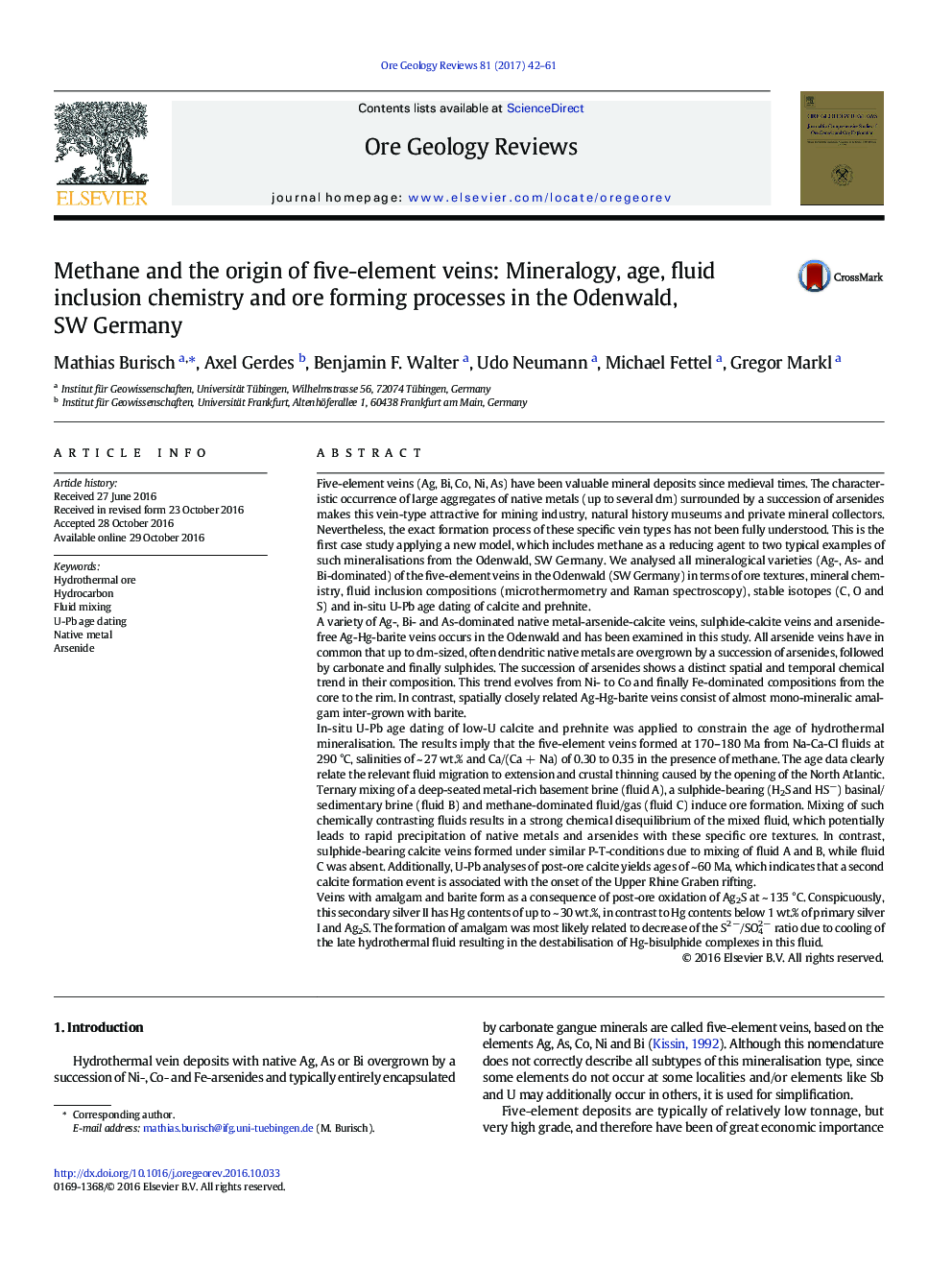 Five-element veins (Ag, Bi, Co, Ni, As) have been valuable mineral deposits since medieval times. The characteristic occurrence of large aggregates of native metals (up to several dm) surrounded by a succession of arsenides makes this vein-type attractive for mining industry, natural history museums and private mineral collectors. Nevertheless, the exact formation process of these specific vein types has not been fully understood. This is the first case study applying a new model, which includes methane as a reducing agent to two typical examples of such mineralisations from the Odenwald, SW Germany. We analysed all mineralogical varieties (Ag-, As- and Bi-dominated) of the five-element veins in the Odenwald (SW Germany) in terms of ore textures, mineral chemistry, fluid inclusion compositions (microthermometry and Raman spectroscopy), stable isotopes (C, O and S) and in-situ U-Pb age dating of calcite and prehnite.A variety of Ag-, Bi- and As-dominated native metal-arsenide-calcite veins, sulphide-calcite veins and arsenide-free Ag-Hg-barite veins occurs in the Odenwald and has been examined in this study. All arsenide veins have in common that up to dm-sized, often dendritic native metals are overgrown by a succession of arsenides, followed by carbonate and finally sulphides. The succession of arsenides shows a distinct spatial and temporal chemical trend in their composition. This trend evolves from Ni- to Co and finally Fe-dominated compositions from the core to the rim. In contrast, spatially closely related Ag-Hg-barite veins consist of almost mono-mineralic amalgam inter-grown with barite.In-situ U-Pb age dating of low-U calcite and prehnite was applied to constrain the age of hydrothermal mineralisation. The results imply that the five-element veins formed at 170–180 Ma from Na-Ca-Cl fluids at 290 °C, salinities of ~ 27 wt.% and Ca/(Ca + Na) of 0.30 to 0.35 in the presence of methane. The age data clearly relate the relevant fluid migration to extension and crustal thinning caused by the opening of the North Atlantic. Ternary mixing of a deep-seated metal-rich basement brine (fluid A), a sulphide-bearing (H2S and HS−) basinal/sedimentary brine (fluid B) and methane-dominated fluid/gas (fluid C) induce ore formation. Mixing of such chemically contrasting fluids results in a strong chemical disequilibrium of the mixed fluid, which potentially leads to rapid precipitation of native metals and arsenides with these specific ore textures. In contrast, sulphide-bearing calcite veins formed under similar P-T-conditions due to mixing of fluid A and B, while fluid C was absent. Additionally, U-Pb analyses of post-ore calcite yields ages of ~ 60 Ma, which indicates that a second calcite formation event is associated with the onset of the Upper Rhine Graben rifting.Veins with amalgam and barite form as a consequence of post-ore oxidation of Ag2S at ~ 135 °C. Conspicuously, this secondary silver II has Hg contents of up to ~ 30 wt.%, in contrast to Hg contents below 1 wt.% of primary silver I and Ag2S. The formation of amalgam was most likely related to decrease of the S2 −/SO42 − ratio due to cooling of the late hydrothermal fluid resulting in the destabilisation of Hg-bisulphide complexes in this fluid.