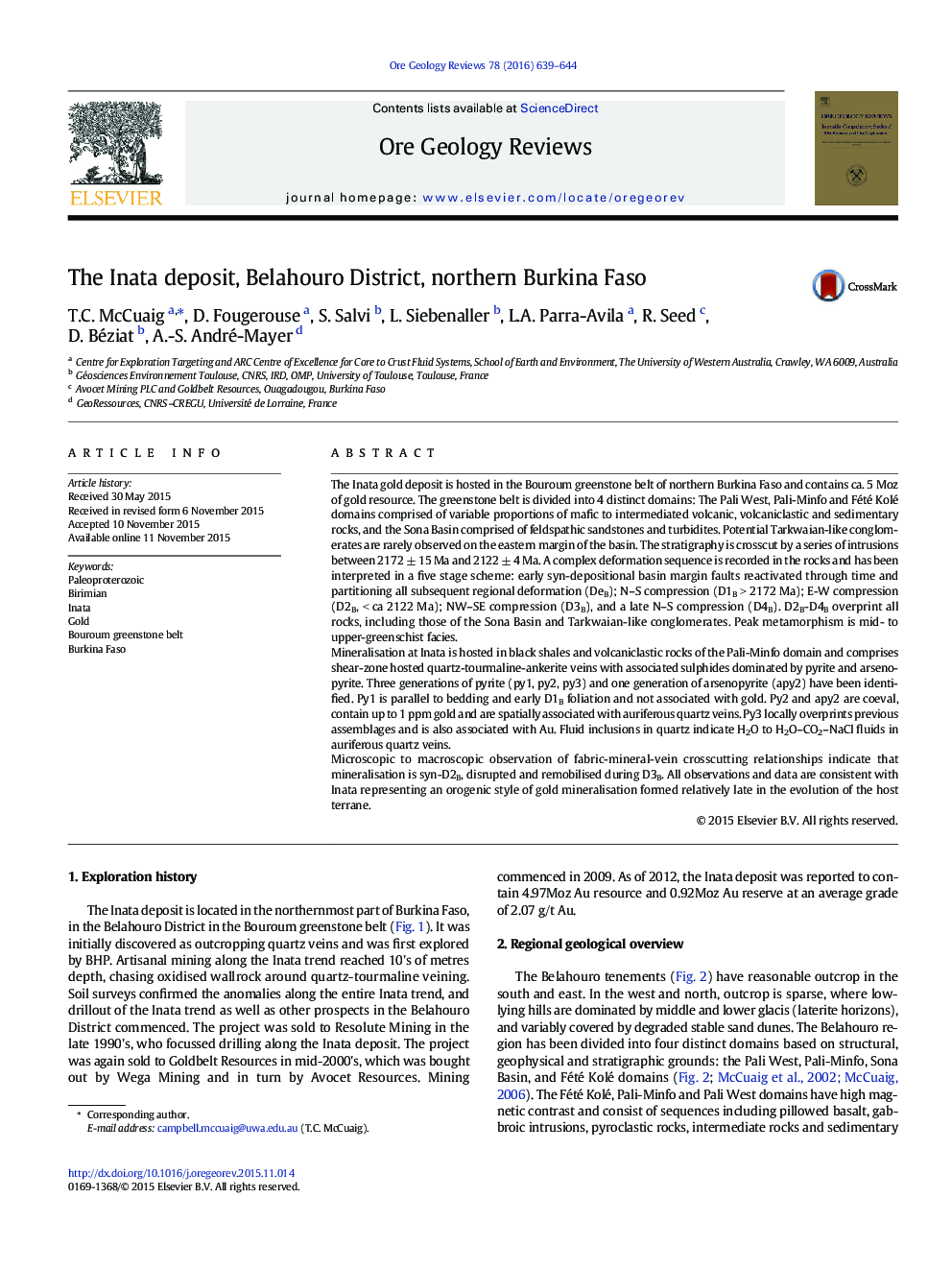 The Inata gold deposit is hosted in the Bouroum greenstone belt of northern Burkina Faso and contains ca. 5 Moz of gold resource. The greenstone belt is divided into 4 distinct domains: The Pali West, Pali-Minfo and Fété Kolé domains comprised of variable proportions of mafic to intermediated volcanic, volcaniclastic and sedimentary rocks, and the Sona Basin comprised of feldspathic sandstones and turbidites. Potential Tarkwaian-like conglomerates are rarely observed on the eastern margin of the basin. The stratigraphy is crosscut by a series of intrusions between 2172 ± 15 Ma and 2122 ± 4 Ma. A complex deformation sequence is recorded in the rocks and has been interpreted in a five stage scheme: early syn-depositional basin margin faults reactivated through time and partitioning all subsequent regional deformation (DeB); N–S compression (D1B > 2172 Ma); E-W compression (D2B, < ca 2122 Ma); NW–SE compression (D3B), and a late N–S compression (D4B). D2B-D4B overprint all rocks, including those of the Sona Basin and Tarkwaian-like conglomerates. Peak metamorphism is mid- to upper-greenschist facies.Mineralisation at Inata is hosted in black shales and volcaniclastic rocks of the Pali-Minfo domain and comprises shear-zone hosted quartz-tourmaline-ankerite veins with associated sulphides dominated by pyrite and arsenopyrite. Three generations of pyrite (py1, py2, py3) and one generation of arsenopyrite (apy2) have been identified. Py1 is parallel to bedding and early D1B foliation and not associated with gold. Py2 and apy2 are coeval, contain up to 1 ppm gold and are spatially associated with auriferous quartz veins. Py3 locally overprints previous assemblages and is also associated with Au. Fluid inclusions in quartz indicate H2O to H2O–CO2–NaCl fluids in auriferous quartz veins.Microscopic to macroscopic observation of fabric-mineral-vein crosscutting relationships indicate that mineralisation is syn-D2B, disrupted and remobilised during D3B. All observations and data are consistent with Inata representing an orogenic style of gold mineralisation formed relatively late in the evolution of the host terrane.