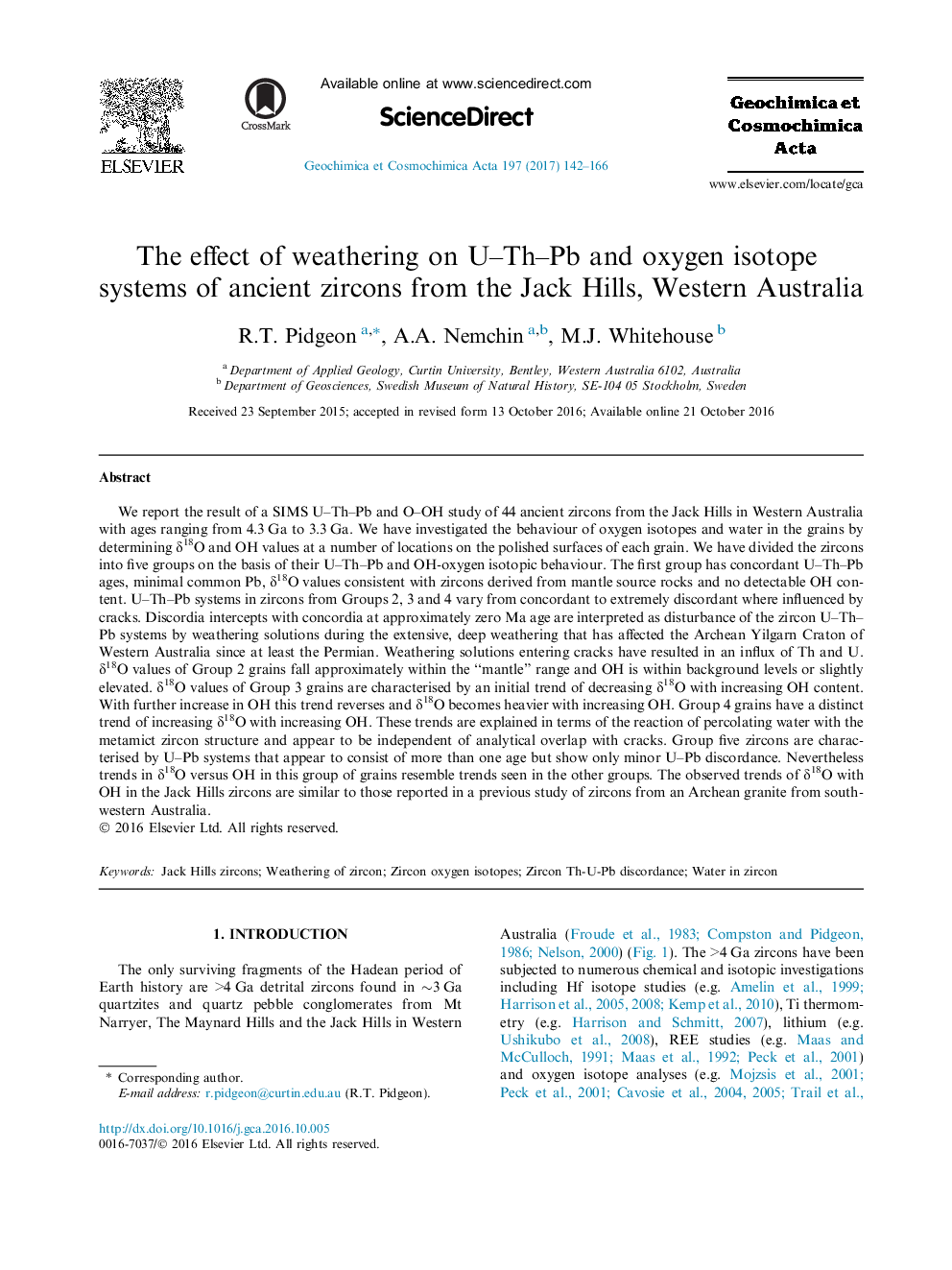 We report the result of a SIMS U–Th–Pb and O–OH study of 44 ancient zircons from the Jack Hills in Western Australia with ages ranging from 4.3 Ga to 3.3 Ga. We have investigated the behaviour of oxygen isotopes and water in the grains by determining δ18O and OH values at a number of locations on the polished surfaces of each grain. We have divided the zircons into five groups on the basis of their U–Th–Pb and OH-oxygen isotopic behaviour. The first group has concordant U–Th–Pb ages, minimal common Pb, δ18O values consistent with zircons derived from mantle source rocks and no detectable OH content. U–Th–Pb systems in zircons from Groups 2, 3 and 4 vary from concordant to extremely discordant where influenced by cracks. Discordia intercepts with concordia at approximately zero Ma age are interpreted as disturbance of the zircon U–Th–Pb systems by weathering solutions during the extensive, deep weathering that has affected the Archean Yilgarn Craton of Western Australia since at least the Permian. Weathering solutions entering cracks have resulted in an influx of Th and U. δ18O values of Group 2 grains fall approximately within the “mantle” range and OH is within background levels or slightly elevated. δ18O values of Group 3 grains are characterised by an initial trend of decreasing δ18O with increasing OH content. With further increase in OH this trend reverses and δ18O becomes heavier with increasing OH. Group 4 grains have a distinct trend of increasing δ18O with increasing OH. These trends are explained in terms of the reaction of percolating water with the metamict zircon structure and appear to be independent of analytical overlap with cracks. Group five zircons are characterised by U–Pb systems that appear to consist of more than one age but show only minor U–Pb discordance. Nevertheless trends in δ18O versus OH in this group of grains resemble trends seen in the other groups. The observed trends of δ18O with OH in the Jack Hills zircons are similar to those reported in a previous study of zircons from an Archean granite from south-western Australia.