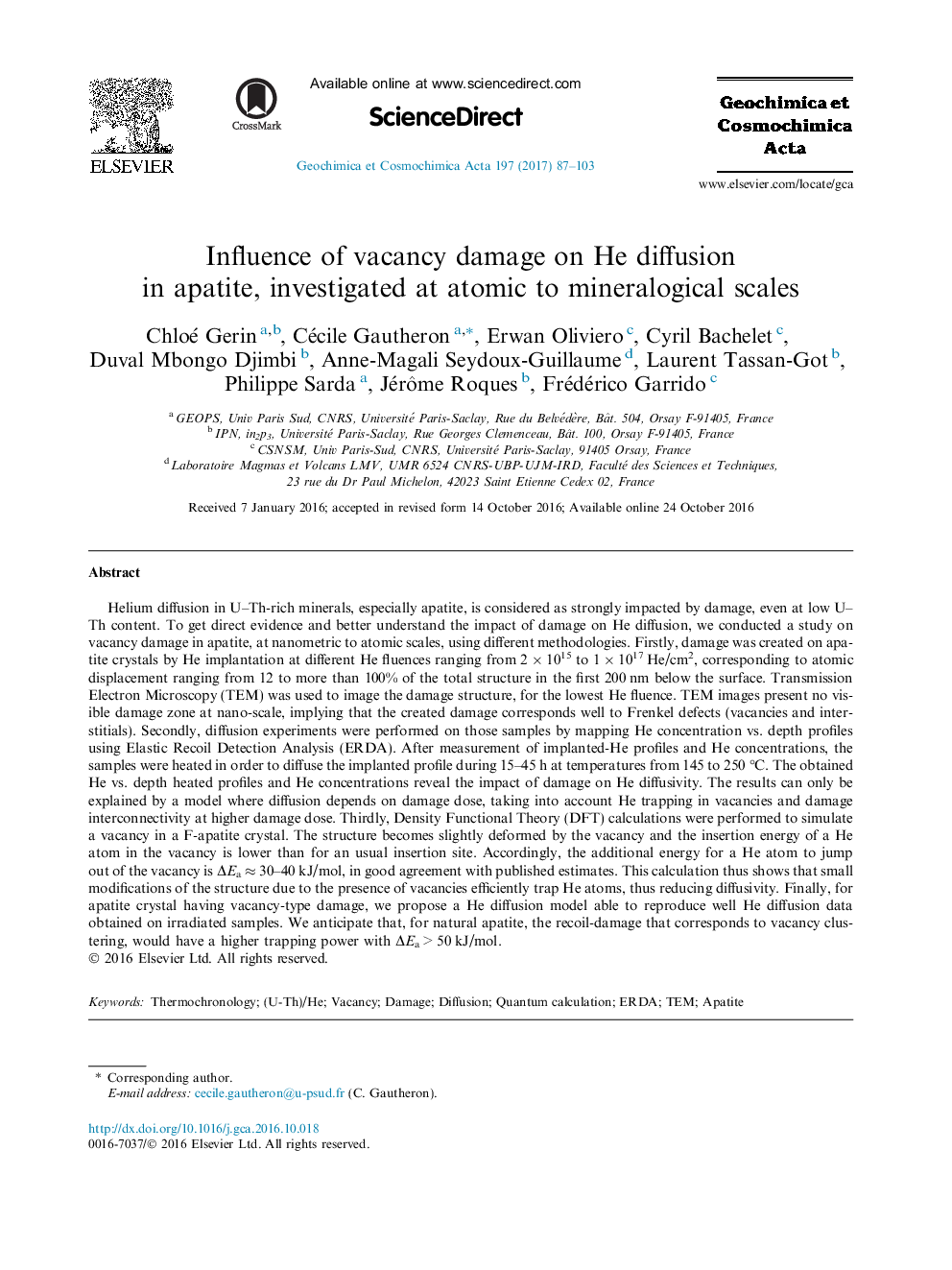 Helium diffusion in U–Th-rich minerals, especially apatite, is considered as strongly impacted by damage, even at low U–Th content. To get direct evidence and better understand the impact of damage on He diffusion, we conducted a study on vacancy damage in apatite, at nanometric to atomic scales, using different methodologies. Firstly, damage was created on apatite crystals by He implantation at different He fluences ranging from 2 × 1015 to 1 × 1017 He/cm2, corresponding to atomic displacement ranging from 12 to more than 100% of the total structure in the first 200 nm below the surface. Transmission Electron Microscopy (TEM) was used to image the damage structure, for the lowest He fluence. TEM images present no visible damage zone at nano-scale, implying that the created damage corresponds well to Frenkel defects (vacancies and interstitials). Secondly, diffusion experiments were performed on those samples by mapping He concentration vs. depth profiles using Elastic Recoil Detection Analysis (ERDA). After measurement of implanted-He profiles and He concentrations, the samples were heated in order to diffuse the implanted profile during 15–45 h at temperatures from 145 to 250 °C. The obtained He vs. depth heated profiles and He concentrations reveal the impact of damage on He diffusivity. The results can only be explained by a model where diffusion depends on damage dose, taking into account He trapping in vacancies and damage interconnectivity at higher damage dose. Thirdly, Density Functional Theory (DFT) calculations were performed to simulate a vacancy in a F-apatite crystal. The structure becomes slightly deformed by the vacancy and the insertion energy of a He atom in the vacancy is lower than for an usual insertion site. Accordingly, the additional energy for a He atom to jump out of the vacancy is ΔEa ≈ 30–40 kJ/mol, in good agreement with published estimates. This calculation thus shows that small modifications of the structure due to the presence of vacancies efficiently trap He atoms, thus reducing diffusivity. Finally, for apatite crystal having vacancy-type damage, we propose a He diffusion model able to reproduce well He diffusion data obtained on irradiated samples. We anticipate that, for natural apatite, the recoil-damage that corresponds to vacancy clustering, would have a higher trapping power with ΔEa > 50 kJ/mol.