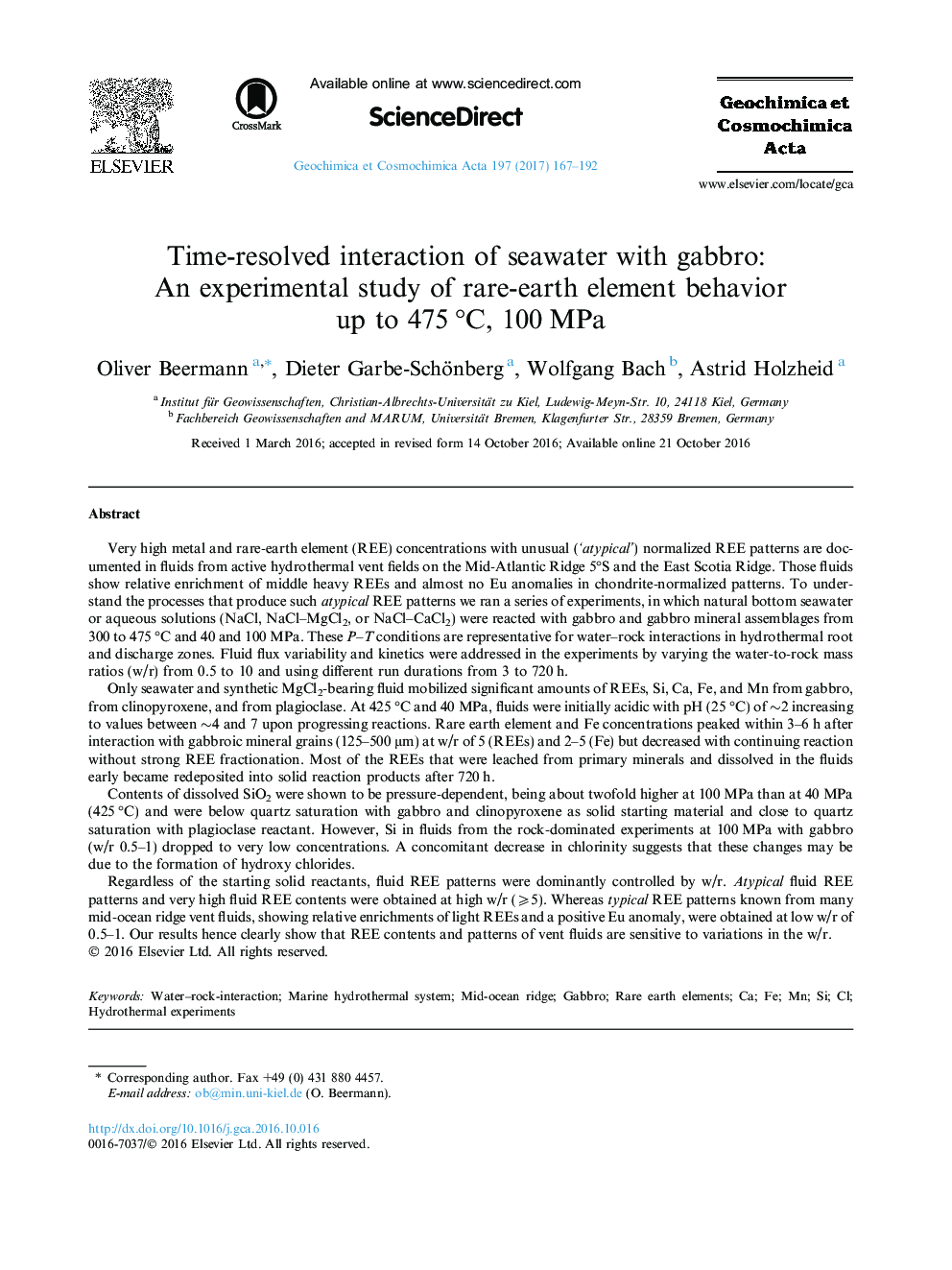 • Very fast reactions within 3–6 h in seawater-dominated systems with gabbro lead to very high dissolved REE contents.
• At high water-to-rock ratios fluids produced by interaction of seawater with gabbro exhibited atypical REE pattern.
• Fluid REE patterns fractionate with increasing water-to-rock ratios and a positive Eu anomaly develops.
• Most of the REEs dissolved in fluids after 3–6 h become re-deposited after 720 h.
• Changes of P–T conditions have no significant influence on REE patterns of fluids that have reacted with gabbro.

Very high metal and rare-earth element (REE) concentrations with unusual (‘atypical’) normalized REE patterns are documented in fluids from active hydrothermal vent fields on the Mid-Atlantic Ridge 5°S and the East Scotia Ridge. Those fluids show relative enrichment of middle heavy REEs and almost no Eu anomalies in chondrite-normalized patterns. To understand the processes that produce such atypical REE patterns we ran a series of experiments, in which natural bottom seawater or aqueous solutions (NaCl, NaCl–MgCl2, or NaCl–CaCl2) were reacted with gabbro and gabbro mineral assemblages from 300 to 475 °C and 40 and 100 MPa. These P–T conditions are representative for water–rock interactions in hydrothermal root and discharge zones. Fluid flux variability and kinetics were addressed in the experiments by varying the water-to-rock mass ratios (w/r) from 0.5 to 10 and using different run durations from 3 to 720 h.Only seawater and synthetic MgCl2-bearing fluid mobilized significant amounts of REEs, Si, Ca, Fe, and Mn from gabbro, from clinopyroxene, and from plagioclase. At 425 °C and 40 MPa, fluids were initially acidic with pH (25 °C) of ∼2 increasing to values between ∼4 and 7 upon progressing reactions. Rare earth element and Fe concentrations peaked within 3–6 h after interaction with gabbroic mineral grains (125–500 μm) at w/r of 5 (REEs) and 2–5 (Fe) but decreased with continuing reaction without strong REE fractionation. Most of the REEs that were leached from primary minerals and dissolved in the fluids early became redeposited into solid reaction products after 720 h.Contents of dissolved SiO2 were shown to be pressure-dependent, being about twofold higher at 100 MPa than at 40 MPa (425 °C) and were below quartz saturation with gabbro and clinopyroxene as solid starting material and close to quartz saturation with plagioclase reactant. However, Si in fluids from the rock-dominated experiments at 100 MPa with gabbro (w/r 0.5–1) dropped to very low concentrations. A concomitant decrease in chlorinity suggests that these changes may be due to the formation of hydroxy chlorides.Regardless of the starting solid reactants, fluid REE patterns were dominantly controlled by w/r. Atypical fluid REE patterns and very high fluid REE contents were obtained at high w/r (⩾5). Whereas typical REE patterns known from many mid-ocean ridge vent fluids, showing relative enrichments of light REEs and a positive Eu anomaly, were obtained at low w/r of 0.5–1. Our results hence clearly show that REE contents and patterns of vent fluids are sensitive to variations in the w/r.