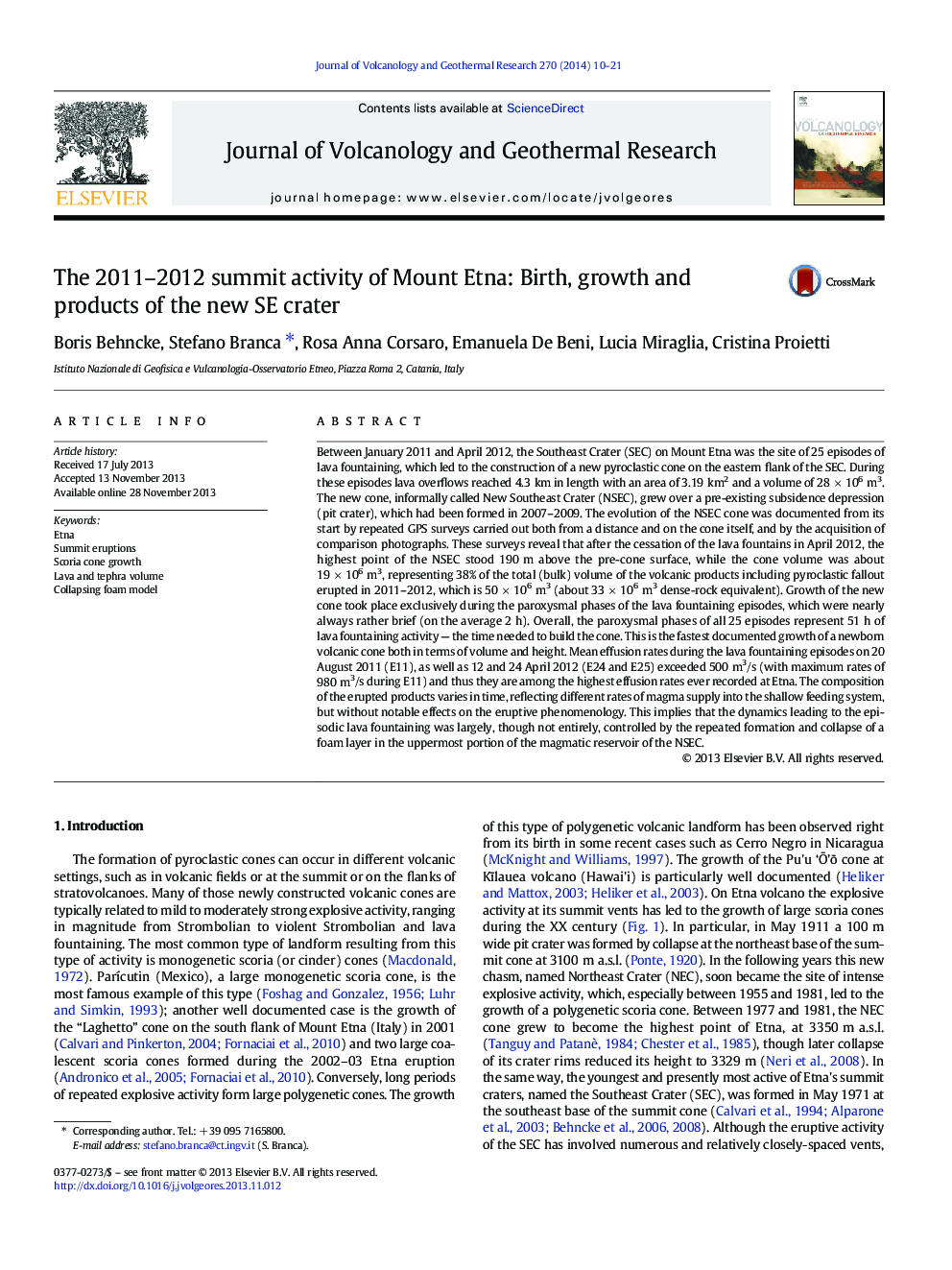 • The exceptional growth of a new summit scoria cone at Etna volcano.
• The summit cone was built up in 51 h of lava fountain activity.
• A total volume of 50 × 106 m3 was erupted during the 25 paroxysmal episodes.
• Paroxysmal activity is driven by the collapse of a foam layer at the top of reservoir.

Between January 2011 and April 2012, the Southeast Crater (SEC) on Mount Etna was the site of 25 episodes of lava fountaining, which led to the construction of a new pyroclastic cone on the eastern flank of the SEC. During these episodes lava overflows reached 4.3 km in length with an area of 3.19 km2 and a volume of 28 × 106 m3. The new cone, informally called New Southeast Crater (NSEC), grew over a pre-existing subsidence depression (pit crater), which had been formed in 2007–2009. The evolution of the NSEC cone was documented from its start by repeated GPS surveys carried out both from a distance and on the cone itself, and by the acquisition of comparison photographs. These surveys reveal that after the cessation of the lava fountains in April 2012, the highest point of the NSEC stood 190 m above the pre-cone surface, while the cone volume was about 19 × 106 m3, representing 38% of the total (bulk) volume of the volcanic products including pyroclastic fallout erupted in 2011–2012, which is 50 × 106 m3 (about 33 × 106 m3 dense-rock equivalent). Growth of the new cone took place exclusively during the paroxysmal phases of the lava fountaining episodes, which were nearly always rather brief (on the average 2 h). Overall, the paroxysmal phases of all 25 episodes represent 51 h of lava fountaining activity — the time needed to build the cone. This is the fastest documented growth of a newborn volcanic cone both in terms of volume and height. Mean effusion rates during the lava fountaining episodes on 20 August 2011 (E11), as well as 12 and 24 April 2012 (E24 and E25) exceeded 500 m3/s (with maximum rates of 980 m3/s during E11) and thus they are among the highest effusion rates ever recorded at Etna. The composition of the erupted products varies in time, reflecting different rates of magma supply into the shallow feeding system, but without notable effects on the eruptive phenomenology. This implies that the dynamics leading to the episodic lava fountaining was largely, though not entirely, controlled by the repeated formation and collapse of a foam layer in the uppermost portion of the magmatic reservoir of the NSEC.