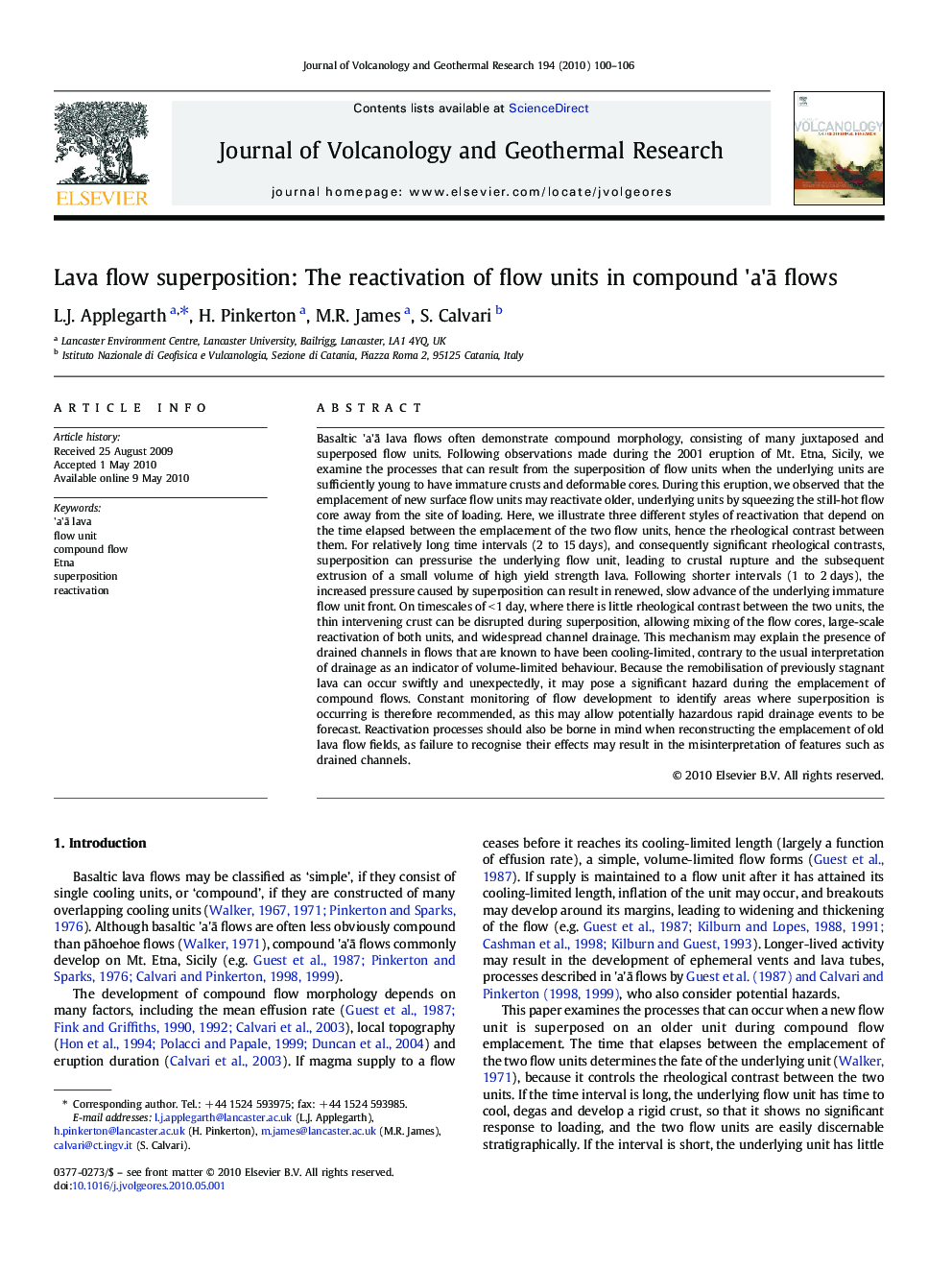 چکیده انگلیسی
Basaltic 'a'Ä lava flows often demonstrate compound morphology, consisting of many juxtaposed and superposed flow units. Following observations made during the 2001 eruption of Mt. Etna, Sicily, we examine the processes that can result from the superposition of flow units when the underlying units are sufficiently young to have immature crusts and deformable cores. During this eruption, we observed that the emplacement of new surface flow units may reactivate older, underlying units by squeezing the still-hot flow core away from the site of loading. Here, we illustrate three different styles of reactivation that depend on the time elapsed between the emplacement of the two flow units, hence the rheological contrast between them. For relatively long time intervals (2 to 15Â days), and consequently significant rheological contrasts, superposition can pressurise the underlying flow unit, leading to crustal rupture and the subsequent extrusion of a small volume of high yield strength lava. Following shorter intervals (1 to 2Â days), the increased pressure caused by superposition can result in renewed, slow advance of the underlying immature flow unit front. On timescales of <Â 1Â day, where there is little rheological contrast between the two units, the thin intervening crust can be disrupted during superposition, allowing mixing of the flow cores, large-scale reactivation of both units, and widespread channel drainage. This mechanism may explain the presence of drained channels in flows that are known to have been cooling-limited, contrary to the usual interpretation of drainage as an indicator of volume-limited behaviour. Because the remobilisation of previously stagnant lava can occur swiftly and unexpectedly, it may pose a significant hazard during the emplacement of compound flows. Constant monitoring of flow development to identify areas where superposition is occurring is therefore recommended, as this may allow potentially hazardous rapid drainage events to be forecast. Reactivation processes should also be borne in mind when reconstructing the emplacement of old lava flow fields, as failure to recognise their effects may result in the misinterpretation of features such as drained channels.
ناشر
Database: Elsevier - ScienceDirect (ساینس دایرکت)
Journal: Journal of Volcanology and Geothermal Research - Volume 194, Issue 4, 30 July 2010, Pages 100-106
نویسندگان
L.J. Applegarth, H. Pinkerton, M.R. James, S. Calvari,
دانلود مقاله + سفارش ترجمه
دانلود مقاله ISI انگلیسی
رایگان برای ایرانیان
سفارش ترجمه تخصصی
با تضمین قیمت و کیفیت
منتشر شده در