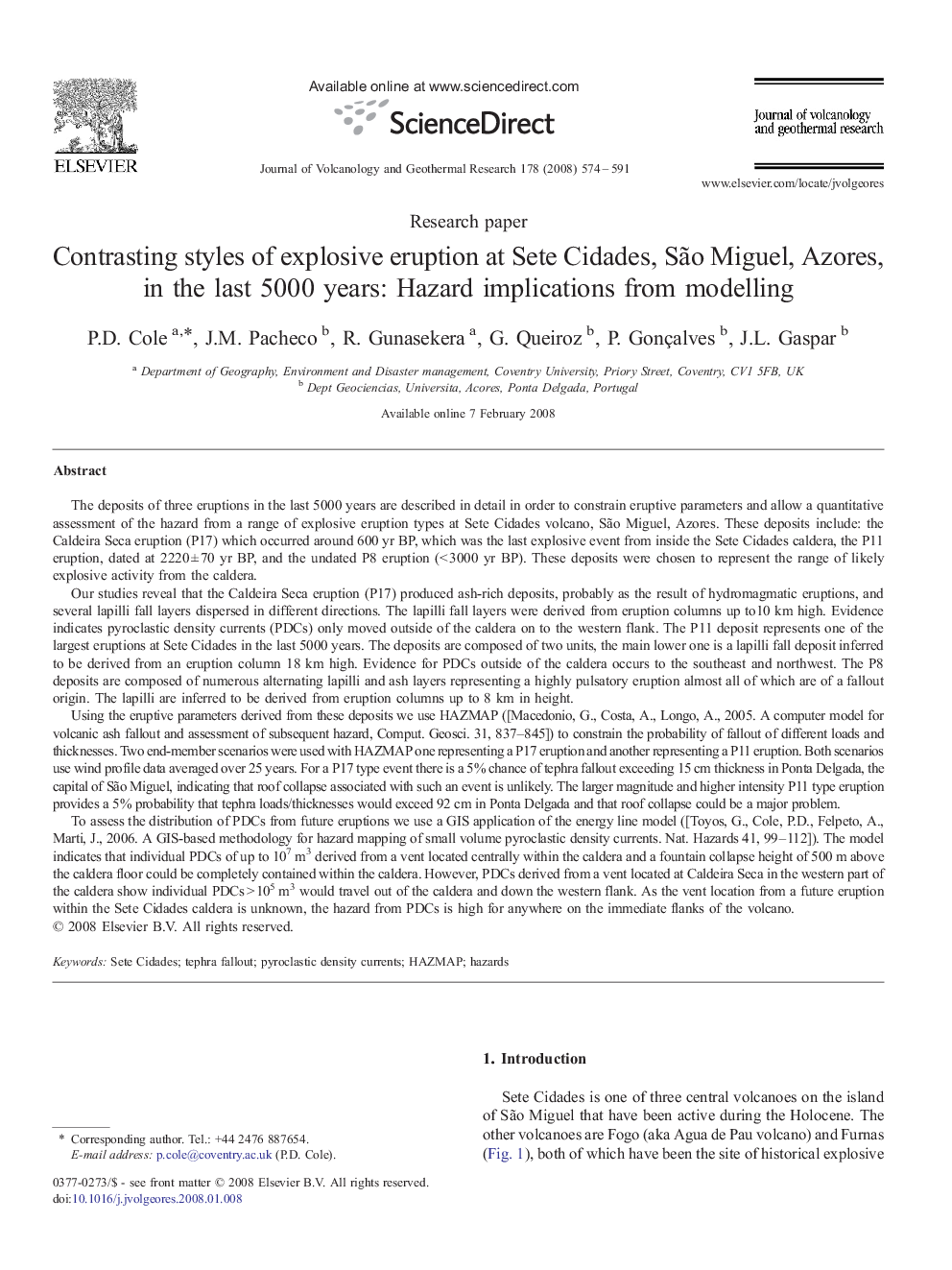 The deposits of three eruptions in the last 5000 years are described in detail in order to constrain eruptive parameters and allow a quantitative assessment of the hazard from a range of explosive eruption types at Sete Cidades volcano, São Miguel, Azores. These deposits include: the Caldeira Seca eruption (P17) which occurred around 600 yr BP, which was the last explosive event from inside the Sete Cidades caldera, the P11 eruption, dated at 2220 ± 70 yr BP, and the undated P8 eruption (< 3000 yr BP). These deposits were chosen to represent the range of likely explosive activity from the caldera.Our studies reveal that the Caldeira Seca eruption (P17) produced ash-rich deposits, probably as the result of hydromagmatic eruptions, and several lapilli fall layers dispersed in different directions. The lapilli fall layers were derived from eruption columns up to10 km high. Evidence indicates pyroclastic density currents (PDCs) only moved outside of the caldera on to the western flank. The P11 deposit represents one of the largest eruptions at Sete Cidades in the last 5000 years. The deposits are composed of two units, the main lower one is a lapilli fall deposit inferred to be derived from an eruption column 18 km high. Evidence for PDCs outside of the caldera occurs to the southeast and northwest. The P8 deposits are composed of numerous alternating lapilli and ash layers representing a highly pulsatory eruption almost all of which are of a fallout origin. The lapilli are inferred to be derived from eruption columns up to 8 km in height.Using the eruptive parameters derived from these deposits we use HAZMAP ([Macedonio, G., Costa, A., Longo, A., 2005. A computer model for volcanic ash fallout and assessment of subsequent hazard, Comput. Geosci. 31, 837–845]) to constrain the probability of fallout of different loads and thicknesses. Two end-member scenarios were used with HAZMAP one representing a P17 eruption and another representing a P11 eruption. Both scenarios use wind profile data averaged over 25 years. For a P17 type event there is a 5% chance of tephra fallout exceeding 15 cm thickness in Ponta Delgada, the capital of São Miguel, indicating that roof collapse associated with such an event is unlikely. The larger magnitude and higher intensity P11 type eruption provides a 5% probability that tephra loads/thicknesses would exceed 92 cm in Ponta Delgada and that roof collapse could be a major problem.To assess the distribution of PDCs from future eruptions we use a GIS application of the energy line model ([Toyos, G., Cole, P.D., Felpeto, A., Marti, J., 2006. A GIS-based methodology for hazard mapping of small volume pyroclastic density currents. Nat. Hazards 41, 99–112]). The model indicates that individual PDCs of up to 107m3 derived from a vent located centrally within the caldera and a fountain collapse height of 500 m above the caldera floor could be completely contained within the caldera. However, PDCs derived from a vent located at Caldeira Seca in the western part of the caldera show individual PDCs > 105m3 would travel out of the caldera and down the western flank. As the vent location from a future eruption within the Sete Cidades caldera is unknown, the hazard from PDCs is high for anywhere on the immediate flanks of the volcano.