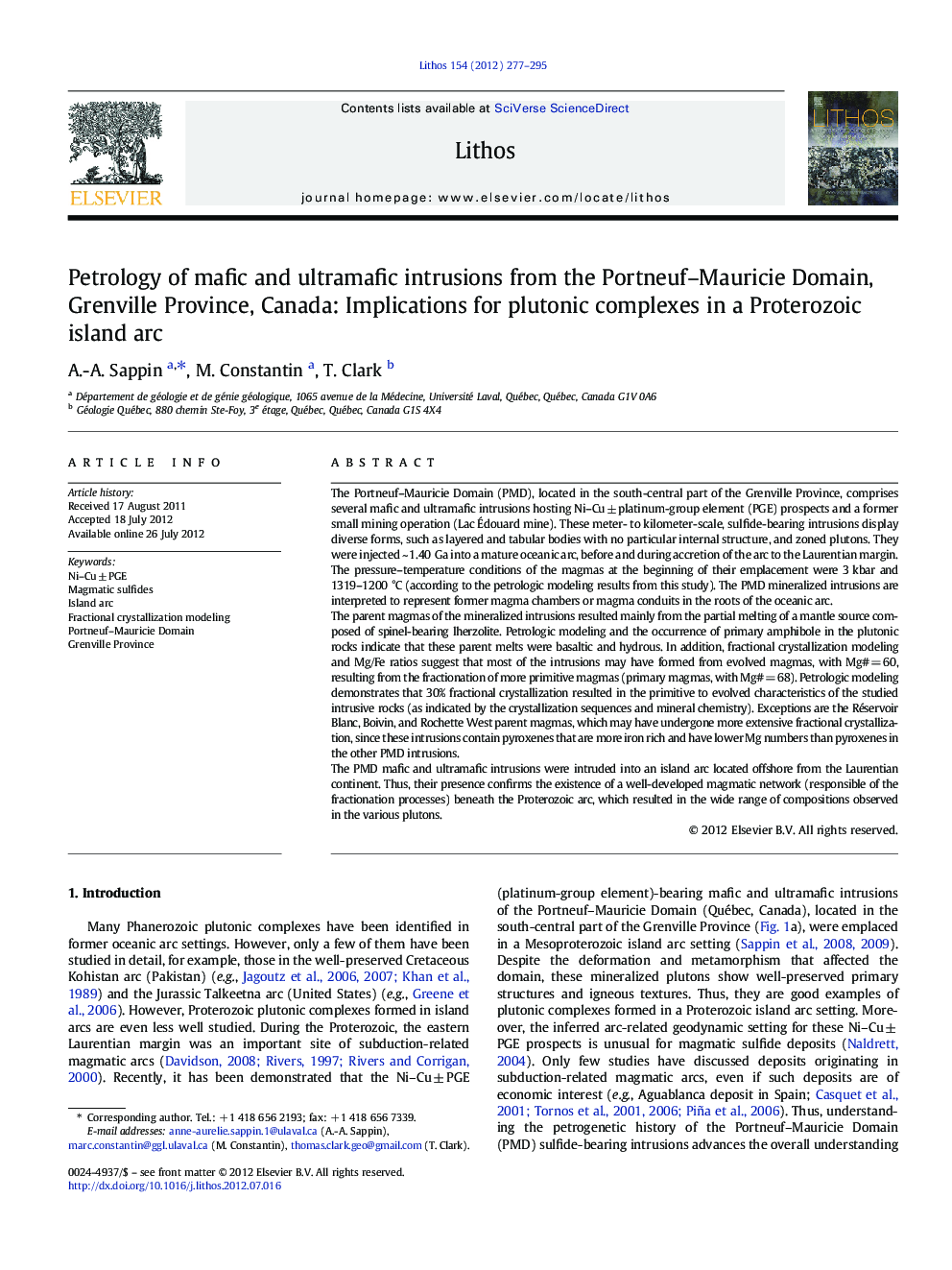 The Portneuf–Mauricie Domain (PMD), located in the south-central part of the Grenville Province, comprises several mafic and ultramafic intrusions hosting Ni–Cu ± platinum-group element (PGE) prospects and a former small mining operation (Lac Édouard mine). These meter- to kilometer-scale, sulfide-bearing intrusions display diverse forms, such as layered and tabular bodies with no particular internal structure, and zoned plutons. They were injected ~ 1.40 Ga into a mature oceanic arc, before and during accretion of the arc to the Laurentian margin. The pressure–temperature conditions of the magmas at the beginning of their emplacement were 3 kbar and 1319–1200 °C (according to the petrologic modeling results from this study). The PMD mineralized intrusions are interpreted to represent former magma chambers or magma conduits in the roots of the oceanic arc.The parent magmas of the mineralized intrusions resulted mainly from the partial melting of a mantle source composed of spinel-bearing lherzolite. Petrologic modeling and the occurrence of primary amphibole in the plutonic rocks indicate that these parent melts were basaltic and hydrous. In addition, fractional crystallization modeling and Mg/Fe ratios suggest that most of the intrusions may have formed from evolved magmas, with Mg# = 60, resulting from the fractionation of more primitive magmas (primary magmas, with Mg# = 68). Petrologic modeling demonstrates that 30% fractional crystallization resulted in the primitive to evolved characteristics of the studied intrusive rocks (as indicated by the crystallization sequences and mineral chemistry). Exceptions are the Réservoir Blanc, Boivin, and Rochette West parent magmas, which may have undergone more extensive fractional crystallization, since these intrusions contain pyroxenes that are more iron rich and have lower Mg numbers than pyroxenes in the other PMD intrusions.The PMD mafic and ultramafic intrusions were intruded into an island arc located offshore from the Laurentian continent. Thus, their presence confirms the existence of a well-developed magmatic network (responsible of the fractionation processes) beneath the Proterozoic arc, which resulted in the wide range of compositions observed in the various plutons.

► Study intrusions of the Portneuf–Mauricie Domain were emplaced in an island arc setting.
► Mineralogical data and petrologic modeling mainly were used to identify the parent melts.
► We distinguished two types of hydrous, basaltic parent magmas according to Mg#.
► The evolved magmas could have resulted from the fractionation of the primary magmas.
► All parent melts sustained crustal contamination and crystal fractionation.