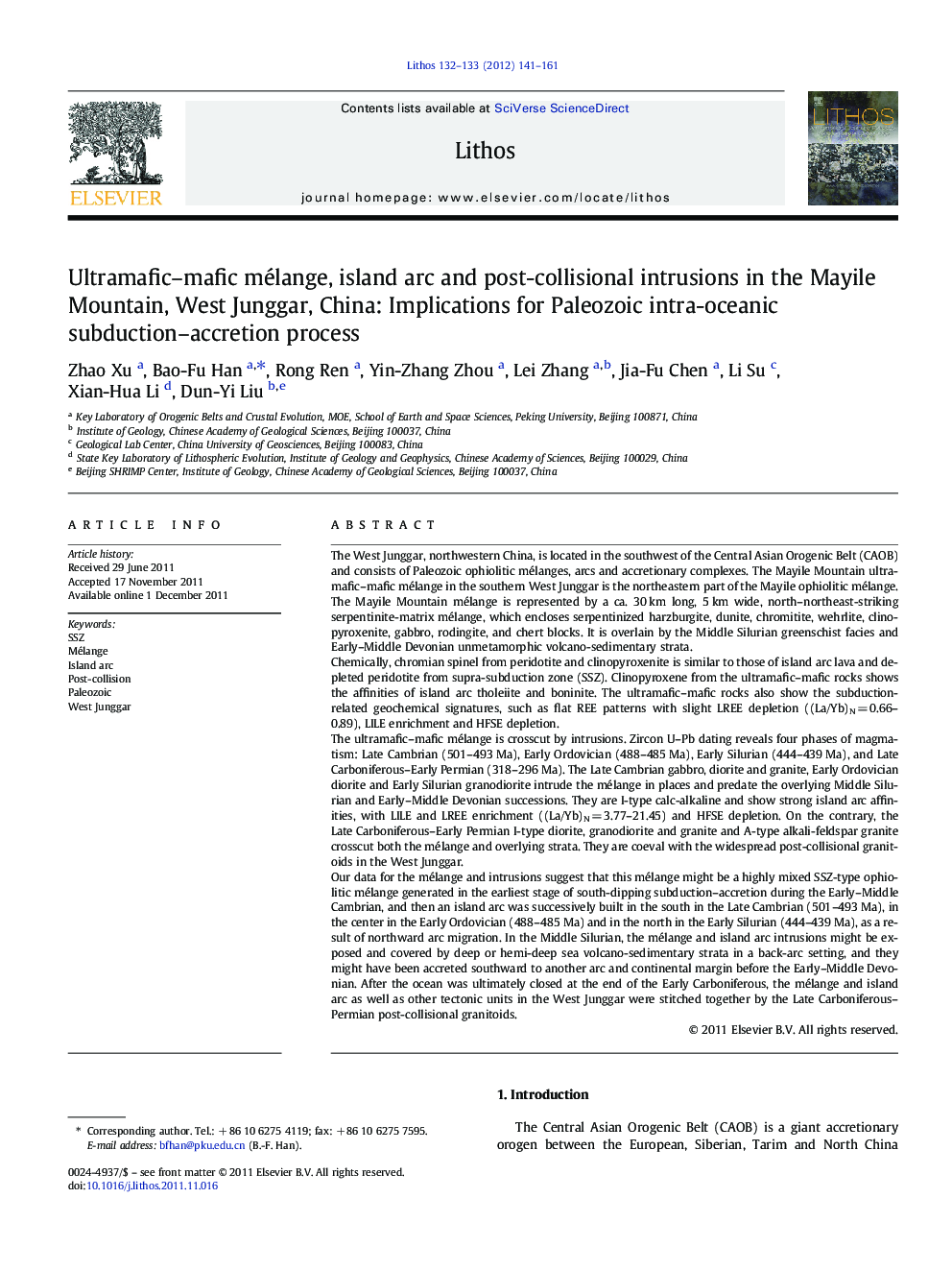 The West Junggar, northwestern China, is located in the southwest of the Central Asian Orogenic Belt (CAOB) and consists of Paleozoic ophiolitic mélanges, arcs and accretionary complexes. The Mayile Mountain ultramafic–mafic mélange in the southern West Junggar is the northeastern part of the Mayile ophiolitic mélange. The Mayile Mountain mélange is represented by a ca. 30 km long, 5 km wide, north–northeast-striking serpentinite-matrix mélange, which encloses serpentinized harzburgite, dunite, chromitite, wehrlite, clinopyroxenite, gabbro, rodingite, and chert blocks. It is overlain by the Middle Silurian greenschist facies and Early–Middle Devonian unmetamorphic volcano-sedimentary strata.Chemically, chromian spinel from peridotite and clinopyroxenite is similar to those of island arc lava and depleted peridotite from supra-subduction zone (SSZ). Clinopyroxene from the ultramafic–mafic rocks shows the affinities of island arc tholeiite and boninite. The ultramafic–mafic rocks also show the subduction-related geochemical signatures, such as flat REE patterns with slight LREE depletion ((La/Yb)N = 0.66–0.89), LILE enrichment and HFSE depletion.The ultramafic–mafic mélange is crosscut by intrusions. Zircon U–Pb dating reveals four phases of magmatism: Late Cambrian (501–493 Ma), Early Ordovician (488–485 Ma), Early Silurian (444–439 Ma), and Late Carboniferous–Early Permian (318–296 Ma). The Late Cambrian gabbro, diorite and granite, Early Ordovician diorite and Early Silurian granodiorite intrude the mélange in places and predate the overlying Middle Silurian and Early–Middle Devonian successions. They are I-type calc-alkaline and show strong island arc affinities, with LILE and LREE enrichment ((La/Yb)N = 3.77–21.45) and HFSE depletion. On the contrary, the Late Carboniferous–Early Permian I-type diorite, granodiorite and granite and A-type alkali-feldspar granite crosscut both the mélange and overlying strata. They are coeval with the widespread post-collisional granitoids in the West Junggar.Our data for the mélange and intrusions suggest that this mélange might be a highly mixed SSZ-type ophiolitic mélange generated in the earliest stage of south-dipping subduction–accretion during the Early–Middle Cambrian, and then an island arc was successively built in the south in the Late Cambrian (501–493 Ma), in the center in the Early Ordovician (488–485 Ma) and in the north in the Early Silurian (444–439 Ma), as a result of northward arc migration. In the Middle Silurian, the mélange and island arc intrusions might be exposed and covered by deep or hemi-deep sea volcano-sedimentary strata in a back-arc setting, and they might have been accreted southward to another arc and continental margin before the Early–Middle Devonian. After the ocean was ultimately closed at the end of the Early Carboniferous, the mélange and island arc as well as other tectonic units in the West Junggar were stitched together by the Late Carboniferous–Permian post-collisional granitoids.