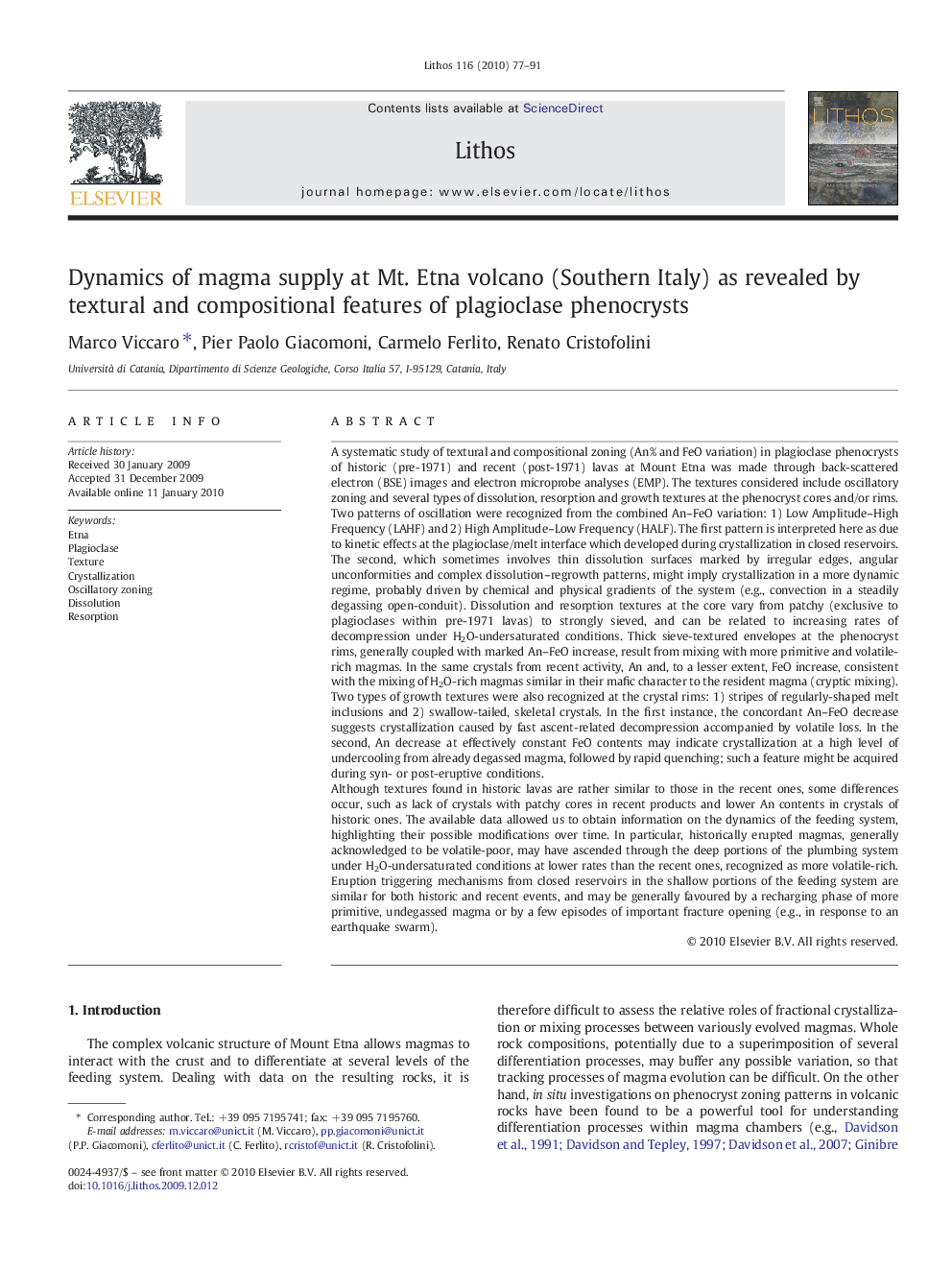 A systematic study of textural and compositional zoning (An% and FeO variation) in plagioclase phenocrysts of historic (pre-1971) and recent (post-1971) lavas at Mount Etna was made through back-scattered electron (BSE) images and electron microprobe analyses (EMP). The textures considered include oscillatory zoning and several types of dissolution, resorption and growth textures at the phenocryst cores and/or rims. Two patterns of oscillation were recognized from the combined An–FeO variation: 1) Low Amplitude–High Frequency (LAHF) and 2) High Amplitude–Low Frequency (HALF). The first pattern is interpreted here as due to kinetic effects at the plagioclase/melt interface which developed during crystallization in closed reservoirs. The second, which sometimes involves thin dissolution surfaces marked by irregular edges, angular unconformities and complex dissolution–regrowth patterns, might imply crystallization in a more dynamic regime, probably driven by chemical and physical gradients of the system (e.g., convection in a steadily degassing open-conduit). Dissolution and resorption textures at the core vary from patchy (exclusive to plagioclases within pre-1971 lavas) to strongly sieved, and can be related to increasing rates of decompression under H2O-undersaturated conditions. Thick sieve-textured envelopes at the phenocryst rims, generally coupled with marked An–FeO increase, result from mixing with more primitive and volatile-rich magmas. In the same crystals from recent activity, An and, to a lesser extent, FeO increase, consistent with the mixing of H2O-rich magmas similar in their mafic character to the resident magma (cryptic mixing). Two types of growth textures were also recognized at the crystal rims: 1) stripes of regularly-shaped melt inclusions and 2) swallow-tailed, skeletal crystals. In the first instance, the concordant An–FeO decrease suggests crystallization caused by fast ascent-related decompression accompanied by volatile loss. In the second, An decrease at effectively constant FeO contents may indicate crystallization at a high level of undercooling from already degassed magma, followed by rapid quenching; such a feature might be acquired during syn- or post-eruptive conditions.Although textures found in historic lavas are rather similar to those in the recent ones, some differences occur, such as lack of crystals with patchy cores in recent products and lower An contents in crystals of historic ones. The available data allowed us to obtain information on the dynamics of the feeding system, highlighting their possible modifications over time. In particular, historically erupted magmas, generally acknowledged to be volatile-poor, may have ascended through the deep portions of the plumbing system under H2O-undersaturated conditions at lower rates than the recent ones, recognized as more volatile-rich. Eruption triggering mechanisms from closed reservoirs in the shallow portions of the feeding system are similar for both historic and recent events, and may be generally favoured by a recharging phase of more primitive, undegassed magma or by a few episodes of important fracture opening (e.g., in response to an earthquake swarm).