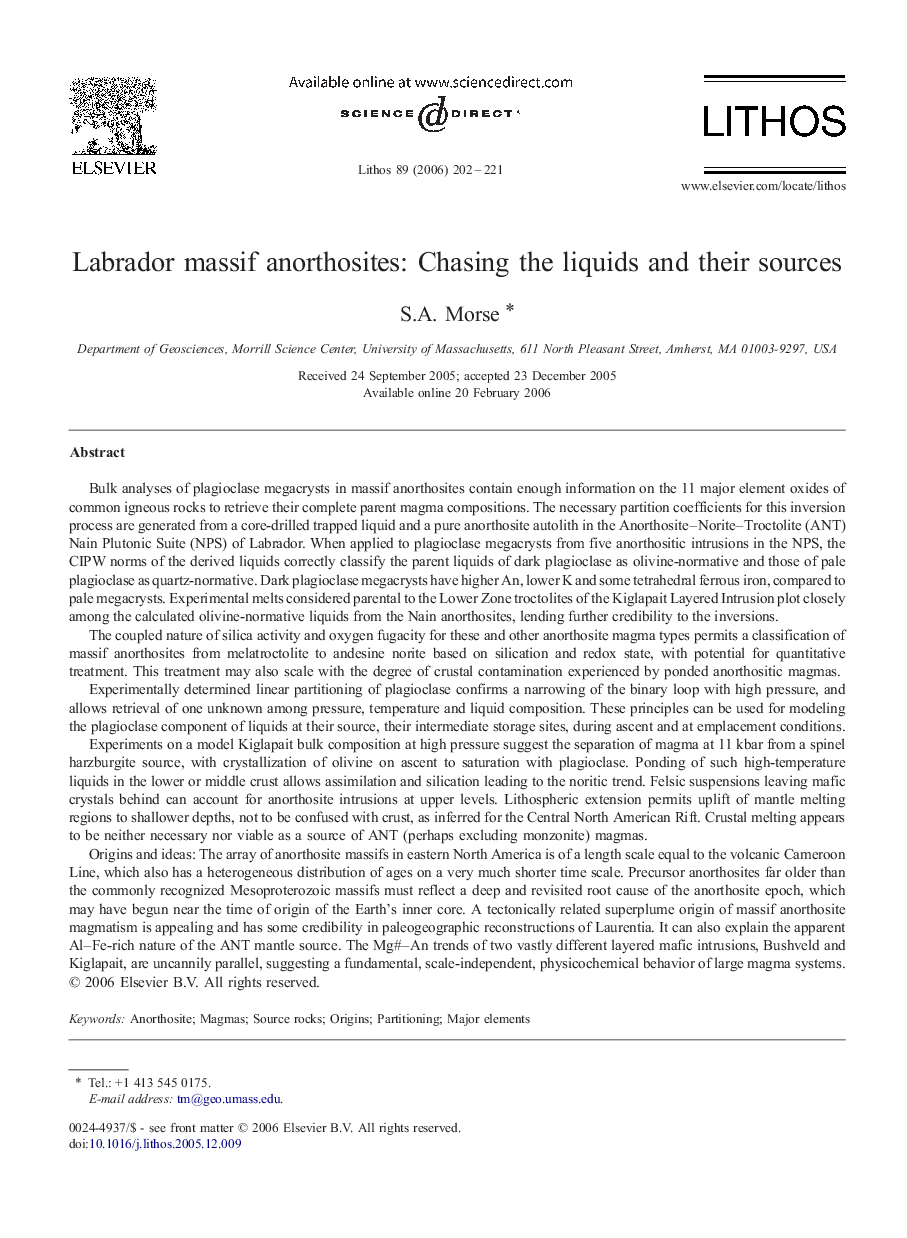 Bulk analyses of plagioclase megacrysts in massif anorthosites contain enough information on the 11 major element oxides of common igneous rocks to retrieve their complete parent magma compositions. The necessary partition coefficients for this inversion process are generated from a core-drilled trapped liquid and a pure anorthosite autolith in the Anorthosite–Norite–Troctolite (ANT) Nain Plutonic Suite (NPS) of Labrador. When applied to plagioclase megacrysts from five anorthositic intrusions in the NPS, the CIPW norms of the derived liquids correctly classify the parent liquids of dark plagioclase as olivine-normative and those of pale plagioclase as quartz-normative. Dark plagioclase megacrysts have higher An, lower K and some tetrahedral ferrous iron, compared to pale megacrysts. Experimental melts considered parental to the Lower Zone troctolites of the Kiglapait Layered Intrusion plot closely among the calculated olivine-normative liquids from the Nain anorthosites, lending further credibility to the inversions.The coupled nature of silica activity and oxygen fugacity for these and other anorthosite magma types permits a classification of massif anorthosites from melatroctolite to andesine norite based on silication and redox state, with potential for quantitative treatment. This treatment may also scale with the degree of crustal contamination experienced by ponded anorthositic magmas.Experimentally determined linear partitioning of plagioclase confirms a narrowing of the binary loop with high pressure, and allows retrieval of one unknown among pressure, temperature and liquid composition. These principles can be used for modeling the plagioclase component of liquids at their source, their intermediate storage sites, during ascent and at emplacement conditions.Experiments on a model Kiglapait bulk composition at high pressure suggest the separation of magma at 11 kbar from a spinel harzburgite source, with crystallization of olivine on ascent to saturation with plagioclase. Ponding of such high-temperature liquids in the lower or middle crust allows assimilation and silication leading to the noritic trend. Felsic suspensions leaving mafic crystals behind can account for anorthosite intrusions at upper levels. Lithospheric extension permits uplift of mantle melting regions to shallower depths, not to be confused with crust, as inferred for the Central North American Rift. Crustal melting appears to be neither necessary nor viable as a source of ANT (perhaps excluding monzonite) magmas.Origins and ideas: The array of anorthosite massifs in eastern North America is of a length scale equal to the volcanic Cameroon Line, which also has a heterogeneous distribution of ages on a very much shorter time scale. Precursor anorthosites far older than the commonly recognized Mesoproterozoic massifs must reflect a deep and revisited root cause of the anorthosite epoch, which may have begun near the time of origin of the Earth's inner core. A tectonically related superplume origin of massif anorthosite magmatism is appealing and has some credibility in paleogeographic reconstructions of Laurentia. It can also explain the apparent Al–Fe-rich nature of the ANT mantle source. The Mg#–An trends of two vastly different layered mafic intrusions, Bushveld and Kiglapait, are uncannily parallel, suggesting a fundamental, scale-independent, physicochemical behavior of large magma systems.