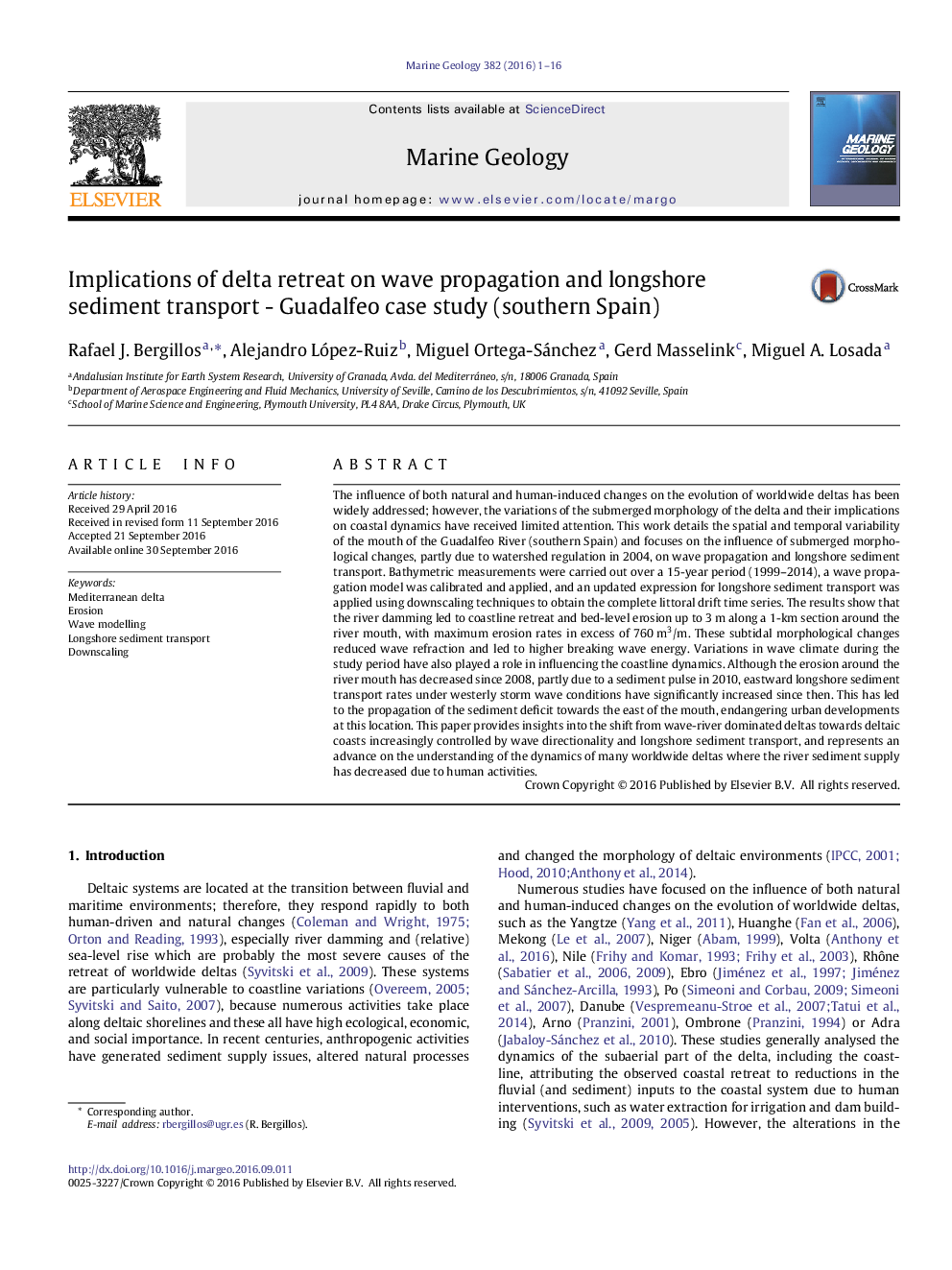 • The effects of delta retreat due to river damming on coastal processes are analysed.
• The erosion generated in the delta is being propagated towards the east of the mouth.
• Delta retreat generated lower refraction and greater wave energy around the mouth.
• Longshore sediment transport was modified by both delta retreat and wave directionality.
• Longshore sediment transport was the main driver of the nearshore changes in the delta.

The influence of both natural and human-induced changes on the evolution of worldwide deltas has been widely addressed; however, the variations of the submerged morphology of the delta and their implications on coastal dynamics have received limited attention. This work details the spatial and temporal variability of the mouth of the Guadalfeo River (southern Spain) and focuses on the influence of submerged morphological changes, partly due to watershed regulation in 2004, on wave propagation and longshore sediment transport. Bathymetric measurements were carried out over a 15-year period (1999–2014), a wave propagation model was calibrated and applied, and an updated expression for longshore sediment transport was applied using downscaling techniques to obtain the complete littoral drift time series. The results show that the river damming led to coastline retreat and bed-level erosion up to 3 m along a 1-km section around the river mouth, with maximum erosion rates in excess of 760 m3/m. These subtidal morphological changes reduced wave refraction and led to higher breaking wave energy. Variations in wave climate during the study period have also played a role in influencing the coastline dynamics. Although the erosion around the river mouth has decreased since 2008, partly due to a sediment pulse in 2010, eastward longshore sediment transport rates under westerly storm wave conditions have significantly increased since then. This has led to the propagation of the sediment deficit towards the east of the mouth, endangering urban developments at this location. This paper provides insights into the shift from wave-river dominated deltas towards deltaic coasts increasingly controlled by wave directionality and longshore sediment transport, and represents an advance on the understanding of the dynamics of many worldwide deltas where the river sediment supply has decreased due to human activities.