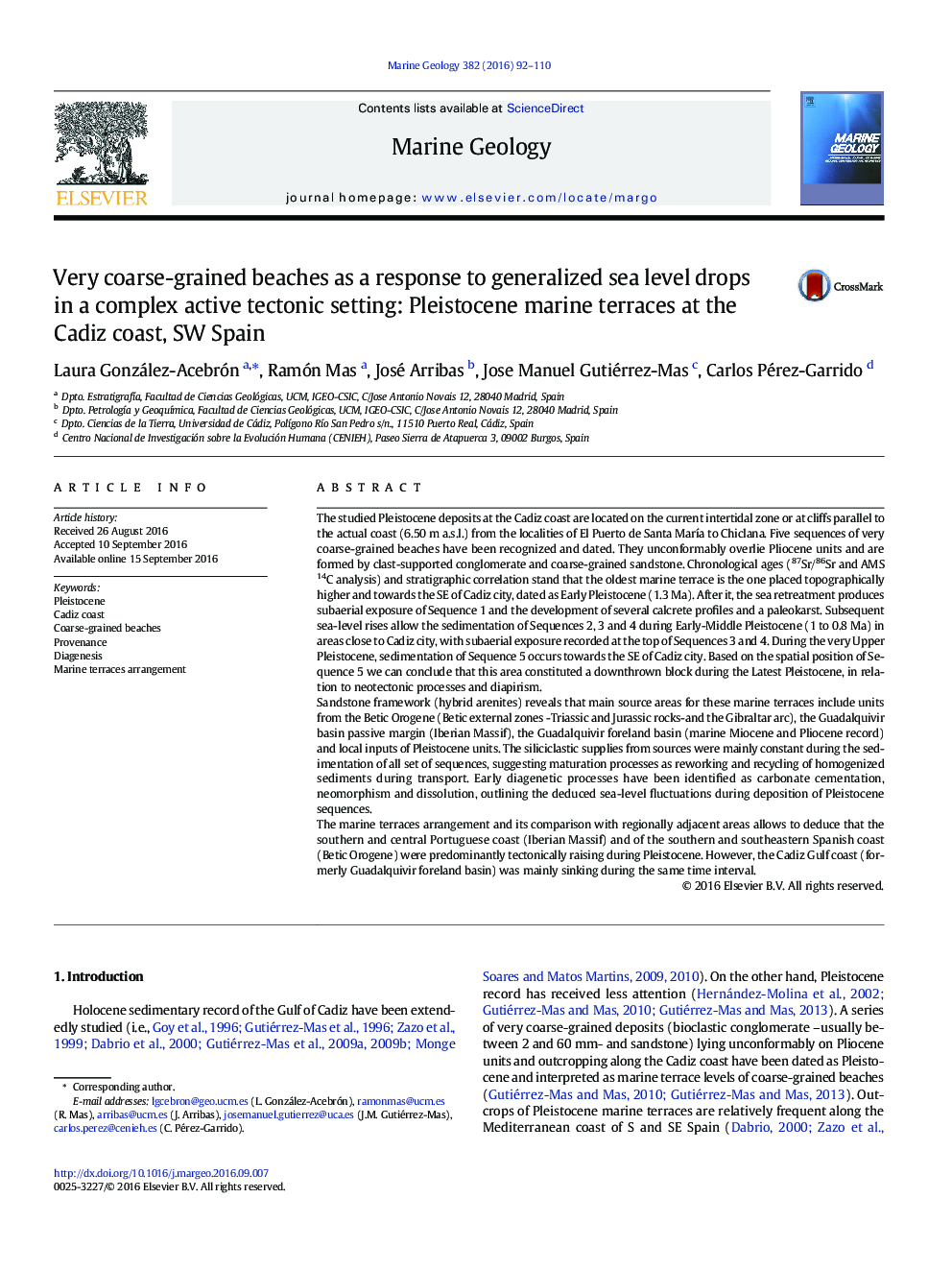 • Five very coarse grained nearshore-beach sequences are proposed in the Cadiz coast.
• These sequences are dated as Pleistocene (from 1.3 Ma to 21,970 ± 80 BP).
• Sequence 1 is topographically higher. Sequences 2–5 are in present intertidal zone.
• Sequence 5 is in a downthrown block towards the SE of Cadiz city due to neotectonics.
• Pleistocene sea-level variations are recorded. Main drop is at the end of Sequence 1.

The studied Pleistocene deposits at the Cadiz coast are located on the current intertidal zone or at cliffs parallel to the actual coast (6.50 m a.s.l.) from the localities of El Puerto de Santa María to Chiclana. Five sequences of very coarse-grained beaches have been recognized and dated. They unconformably overlie Pliocene units and are formed by clast-supported conglomerate and coarse-grained sandstone. Chronological ages (87Sr/86Sr and AMS 14C analysis) and stratigraphic correlation stand that the oldest marine terrace is the one placed topographically higher and towards the SE of Cadiz city, dated as Early Pleistocene (1.3 Ma). After it, the sea retreatment produces subaerial exposure of Sequence 1 and the development of several calcrete profiles and a paleokarst. Subsequent sea-level rises allow the sedimentation of Sequences 2, 3 and 4 during Early-Middle Pleistocene (1 to 0.8 Ma) in areas close to Cadiz city, with subaerial exposure recorded at the top of Sequences 3 and 4. During the very Upper Pleistocene, sedimentation of Sequence 5 occurs towards the SE of Cadiz city. Based on the spatial position of Sequence 5 we can conclude that this area constituted a downthrown block during the Latest Pleistocene, in relation to neotectonic processes and diapirism.Sandstone framework (hybrid arenites) reveals that main source areas for these marine terraces include units from the Betic Orogene (Betic external zones -Triassic and Jurassic rocks-and the Gibraltar arc), the Guadalquivir basin passive margin (Iberian Massif), the Guadalquivir foreland basin (marine Miocene and Pliocene record) and local inputs of Pleistocene units. The siliciclastic supplies from sources were mainly constant during the sedimentation of all set of sequences, suggesting maturation processes as reworking and recycling of homogenized sediments during transport. Early diagenetic processes have been identified as carbonate cementation, neomorphism and dissolution, outlining the deduced sea-level fluctuations during deposition of Pleistocene sequences.The marine terraces arrangement and its comparison with regionally adjacent areas allows to deduce that the southern and central Portuguese coast (Iberian Massif) and of the southern and southeastern Spanish coast (Betic Orogene) were predominantly tectonically raising during Pleistocene. However, the Cadiz Gulf coast (formerly Guadalquivir foreland basin) was mainly sinking during the same time interval.