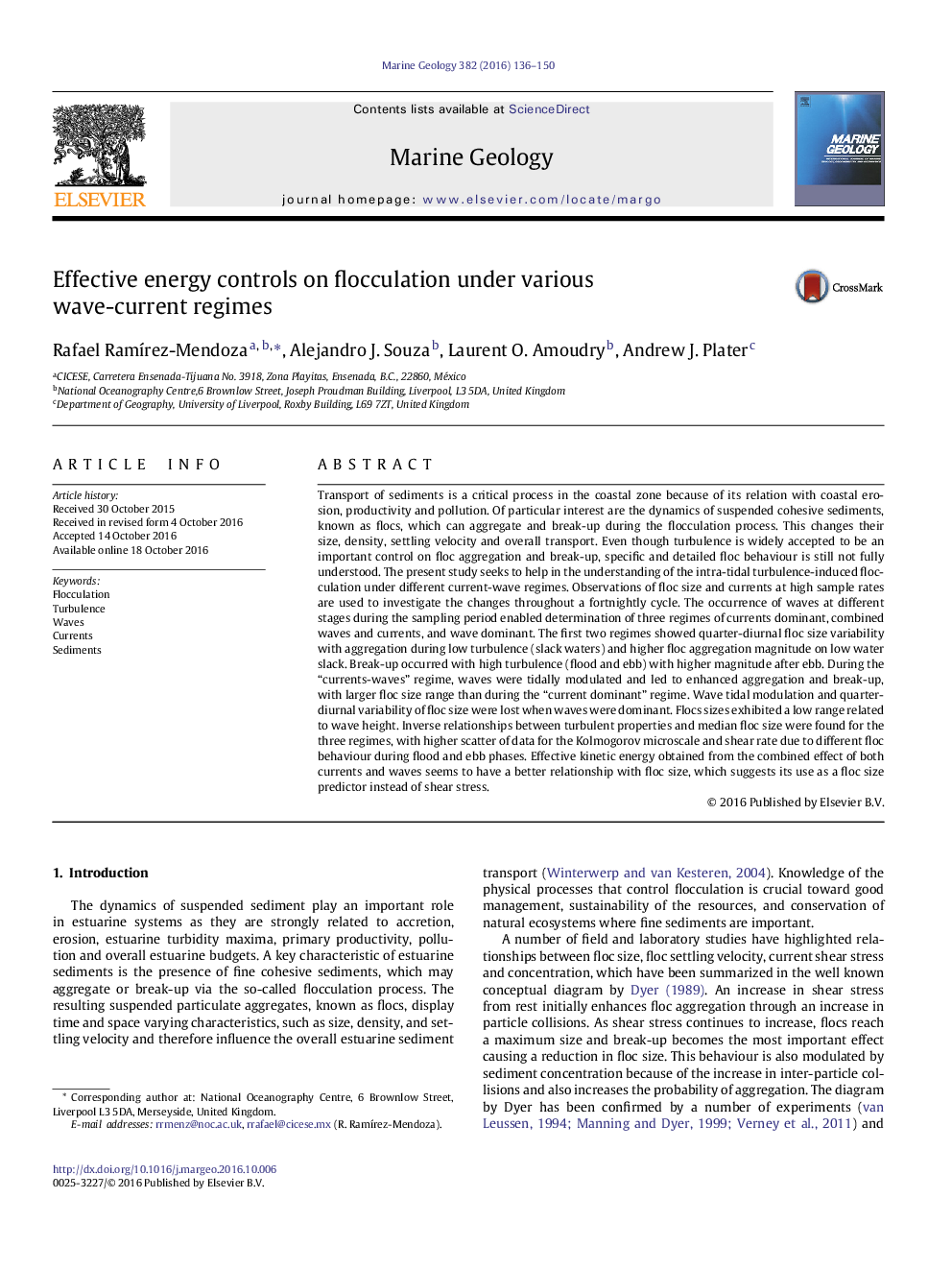 • Effective kinetic energy is found to be a better predictor of floc size.
• Largest changes in floc size occurred under combined waves and currents.
• Wave dominance resulted in the largest shear stress but reduced floc size changes.
• Floc size scatter is decreased by separating by wave-current regime and tidal phase.

Transport of sediments is a critical process in the coastal zone because of its relation with coastal erosion, productivity and pollution. Of particular interest are the dynamics of suspended cohesive sediments, known as flocs, which can aggregate and break-up during the flocculation process. This changes their size, density, settling velocity and overall transport. Even though turbulence is widely accepted to be an important control on floc aggregation and break-up, specific and detailed floc behaviour is still not fully understood. The present study seeks to help in the understanding of the intra-tidal turbulence-induced flocculation under different current-wave regimes. Observations of floc size and currents at high sample rates are used to investigate the changes throughout a fortnightly cycle. The occurrence of waves at different stages during the sampling period enabled determination of three regimes of currents dominant, combined waves and currents, and wave dominant. The first two regimes showed quarter-diurnal floc size variability with aggregation during low turbulence (slack waters) and higher floc aggregation magnitude on low water slack. Break-up occurred with high turbulence (flood and ebb) with higher magnitude after ebb. During the “currents-waves” regime, waves were tidally modulated and led to enhanced aggregation and break-up, with larger floc size range than during the “current dominant” regime. Wave tidal modulation and quarter-diurnal variability of floc size were lost when waves were dominant. Flocs sizes exhibited a low range related to wave height. Inverse relationships between turbulent properties and median floc size were found for the three regimes, with higher scatter of data for the Kolmogorov microscale and shear rate due to different floc behaviour during flood and ebb phases. Effective kinetic energy obtained from the combined effect of both currents and waves seems to have a better relationship with floc size, which suggests its use as a floc size predictor instead of shear stress.