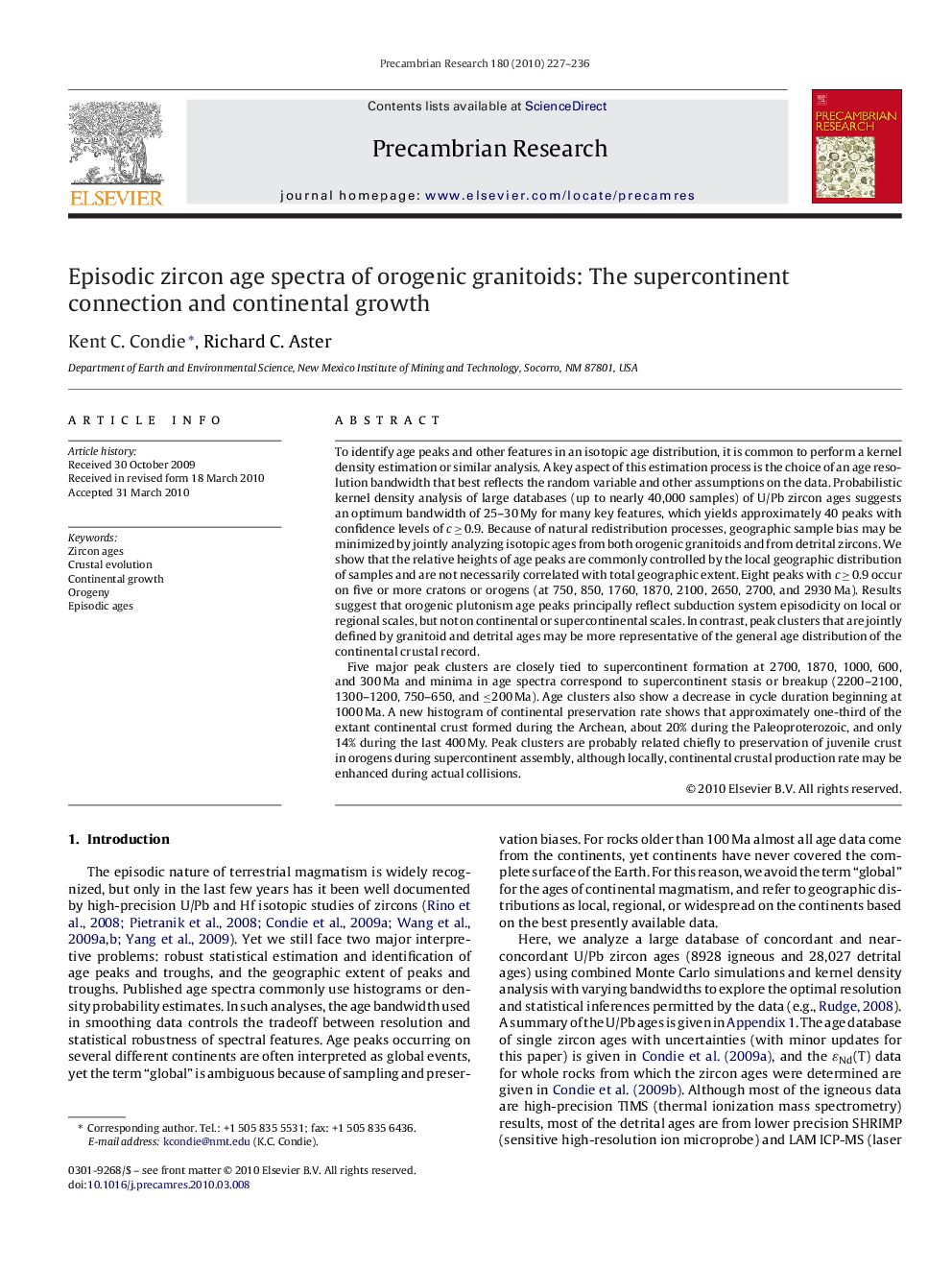 To identify age peaks and other features in an isotopic age distribution, it is common to perform a kernel density estimation or similar analysis. A key aspect of this estimation process is the choice of an age resolution bandwidth that best reflects the random variable and other assumptions on the data. Probabilistic kernel density analysis of large databases (up to nearly 40,000 samples) of U/Pb zircon ages suggests an optimum bandwidth of 25–30 My for many key features, which yields approximately 40 peaks with confidence levels of c ≥ 0.9. Because of natural redistribution processes, geographic sample bias may be minimized by jointly analyzing isotopic ages from both orogenic granitoids and from detrital zircons. We show that the relative heights of age peaks are commonly controlled by the local geographic distribution of samples and are not necessarily correlated with total geographic extent. Eight peaks with c ≥ 0.9 occur on five or more cratons or orogens (at 750, 850, 1760, 1870, 2100, 2650, 2700, and 2930 Ma). Results suggest that orogenic plutonism age peaks principally reflect subduction system episodicity on local or regional scales, but not on continental or supercontinental scales. In contrast, peak clusters that are jointly defined by granitoid and detrital ages may be more representative of the general age distribution of the continental crustal record.Five major peak clusters are closely tied to supercontinent formation at 2700, 1870, 1000, 600, and 300 Ma and minima in age spectra correspond to supercontinent stasis or breakup (2200–2100, 1300–1200, 750–650, and ≤200 Ma). Age clusters also show a decrease in cycle duration beginning at 1000 Ma. A new histogram of continental preservation rate shows that approximately one-third of the extant continental crust formed during the Archean, about 20% during the Paleoproterozoic, and only 14% during the last 400 My. Peak clusters are probably related chiefly to preservation of juvenile crust in orogens during supercontinent assembly, although locally, continental crustal production rate may be enhanced during actual collisions.