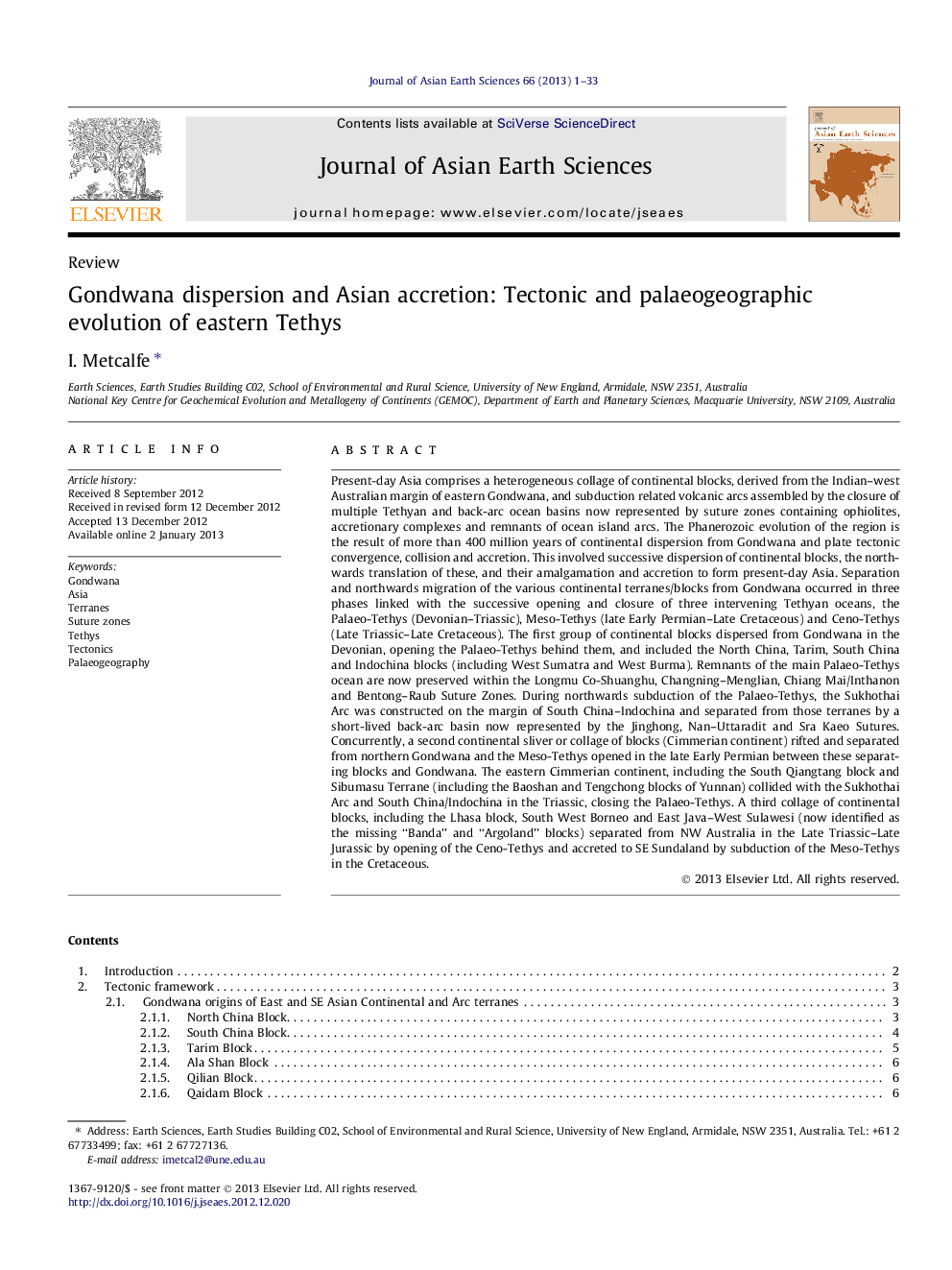 Present-day Asia comprises a heterogeneous collage of continental blocks, derived from the Indian–west Australian margin of eastern Gondwana, and subduction related volcanic arcs assembled by the closure of multiple Tethyan and back-arc ocean basins now represented by suture zones containing ophiolites, accretionary complexes and remnants of ocean island arcs. The Phanerozoic evolution of the region is the result of more than 400 million years of continental dispersion from Gondwana and plate tectonic convergence, collision and accretion. This involved successive dispersion of continental blocks, the northwards translation of these, and their amalgamation and accretion to form present-day Asia. Separation and northwards migration of the various continental terranes/blocks from Gondwana occurred in three phases linked with the successive opening and closure of three intervening Tethyan oceans, the Palaeo-Tethys (Devonian–Triassic), Meso-Tethys (late Early Permian–Late Cretaceous) and Ceno-Tethys (Late Triassic–Late Cretaceous). The first group of continental blocks dispersed from Gondwana in the Devonian, opening the Palaeo-Tethys behind them, and included the North China, Tarim, South China and Indochina blocks (including West Sumatra and West Burma). Remnants of the main Palaeo-Tethys ocean are now preserved within the Longmu Co-Shuanghu, Changning–Menglian, Chiang Mai/Inthanon and Bentong–Raub Suture Zones. During northwards subduction of the Palaeo-Tethys, the Sukhothai Arc was constructed on the margin of South China–Indochina and separated from those terranes by a short-lived back-arc basin now represented by the Jinghong, Nan–Uttaradit and Sra Kaeo Sutures. Concurrently, a second continental sliver or collage of blocks (Cimmerian continent) rifted and separated from northern Gondwana and the Meso-Tethys opened in the late Early Permian between these separating blocks and Gondwana. The eastern Cimmerian continent, including the South Qiangtang block and Sibumasu Terrane (including the Baoshan and Tengchong blocks of Yunnan) collided with the Sukhothai Arc and South China/Indochina in the Triassic, closing the Palaeo-Tethys. A third collage of continental blocks, including the Lhasa block, South West Borneo and East Java–West Sulawesi (now identified as the missing “Banda” and “Argoland” blocks) separated from NW Australia in the Late Triassic–Late Jurassic by opening of the Ceno-Tethys and accreted to SE Sundaland by subduction of the Meso-Tethys in the Cretaceous.