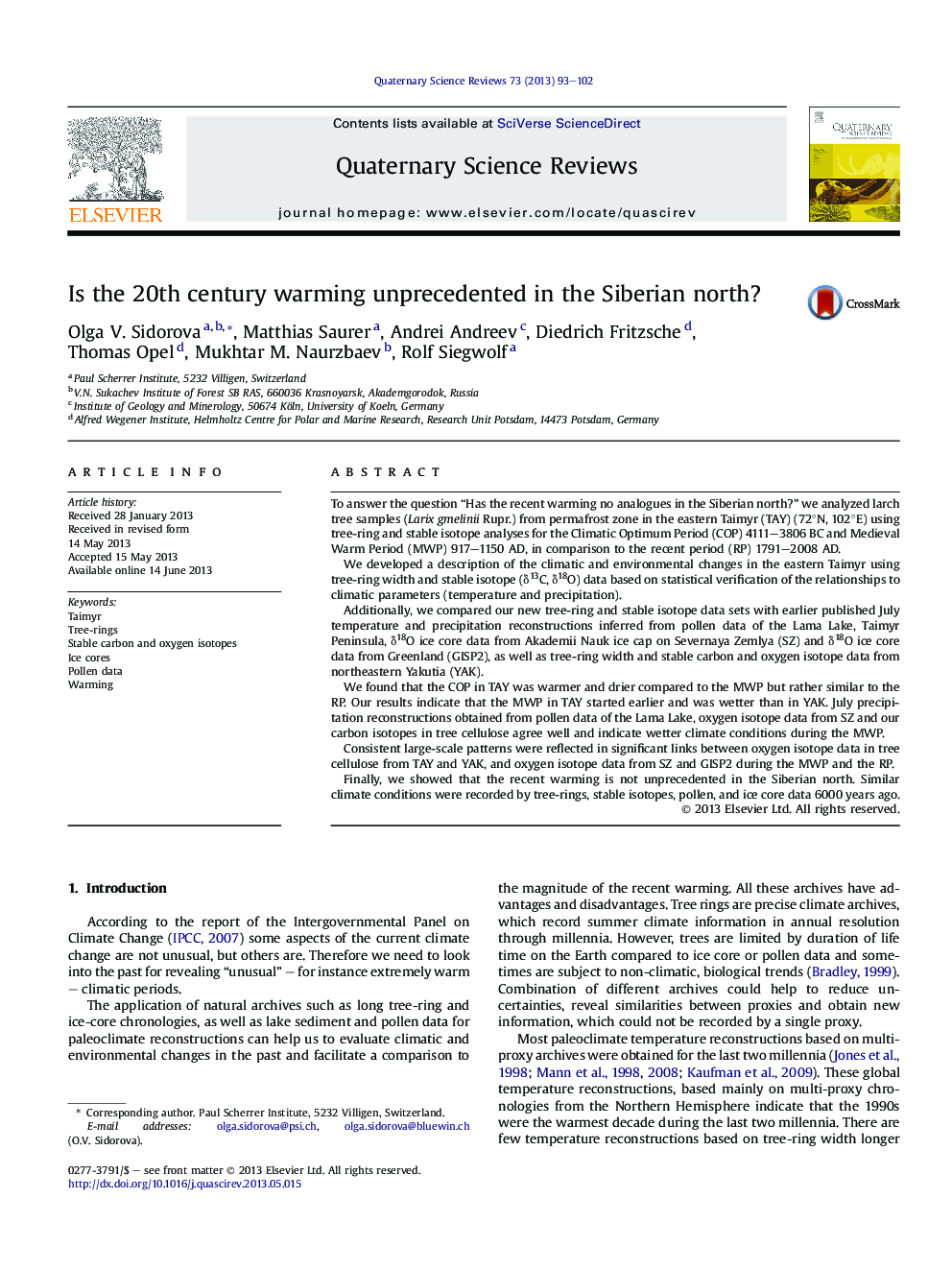 • The multi-proxy approach.
• The combination of classical dendrochronological methods with stable isotope analysis.
• The recent warming is not unprecedented in the Siberian north.
• Similar climatic conditions to the present warming were recorded by about 6000 BC.
• The Medieval Warm Period was wetter compared to 4111–3850 BC and 1791–2008 AD.

To answer the question “Has the recent warming no analogues in the Siberian north?” we analyzed larch tree samples (Larix gmelinii Rupr.) from permafrost zone in the eastern Taimyr (TAY) (72°N, 102°E) using tree-ring and stable isotope analyses for the Climatic Optimum Period (COP) 4111–3806 BC and Medieval Warm Period (MWP) 917–1150 AD, in comparison to the recent period (RP) 1791–2008 AD.We developed a description of the climatic and environmental changes in the eastern Taimyr using tree-ring width and stable isotope (δ13C, δ18O) data based on statistical verification of the relationships to climatic parameters (temperature and precipitation).Additionally, we compared our new tree-ring and stable isotope data sets with earlier published July temperature and precipitation reconstructions inferred from pollen data of the Lama Lake, Taimyr Peninsula, δ18O ice core data from Akademii Nauk ice cap on Severnaya Zemlya (SZ) and δ18O ice core data from Greenland (GISP2), as well as tree-ring width and stable carbon and oxygen isotope data from northeastern Yakutia (YAK).We found that the COP in TAY was warmer and drier compared to the MWP but rather similar to the RP. Our results indicate that the MWP in TAY started earlier and was wetter than in YAK. July precipitation reconstructions obtained from pollen data of the Lama Lake, oxygen isotope data from SZ and our carbon isotopes in tree cellulose agree well and indicate wetter climate conditions during the MWP.Consistent large-scale patterns were reflected in significant links between oxygen isotope data in tree cellulose from TAY and YAK, and oxygen isotope data from SZ and GISP2 during the MWP and the RP.Finally, we showed that the recent warming is not unprecedented in the Siberian north. Similar climate conditions were recorded by tree-rings, stable isotopes, pollen, and ice core data 6000 years ago.