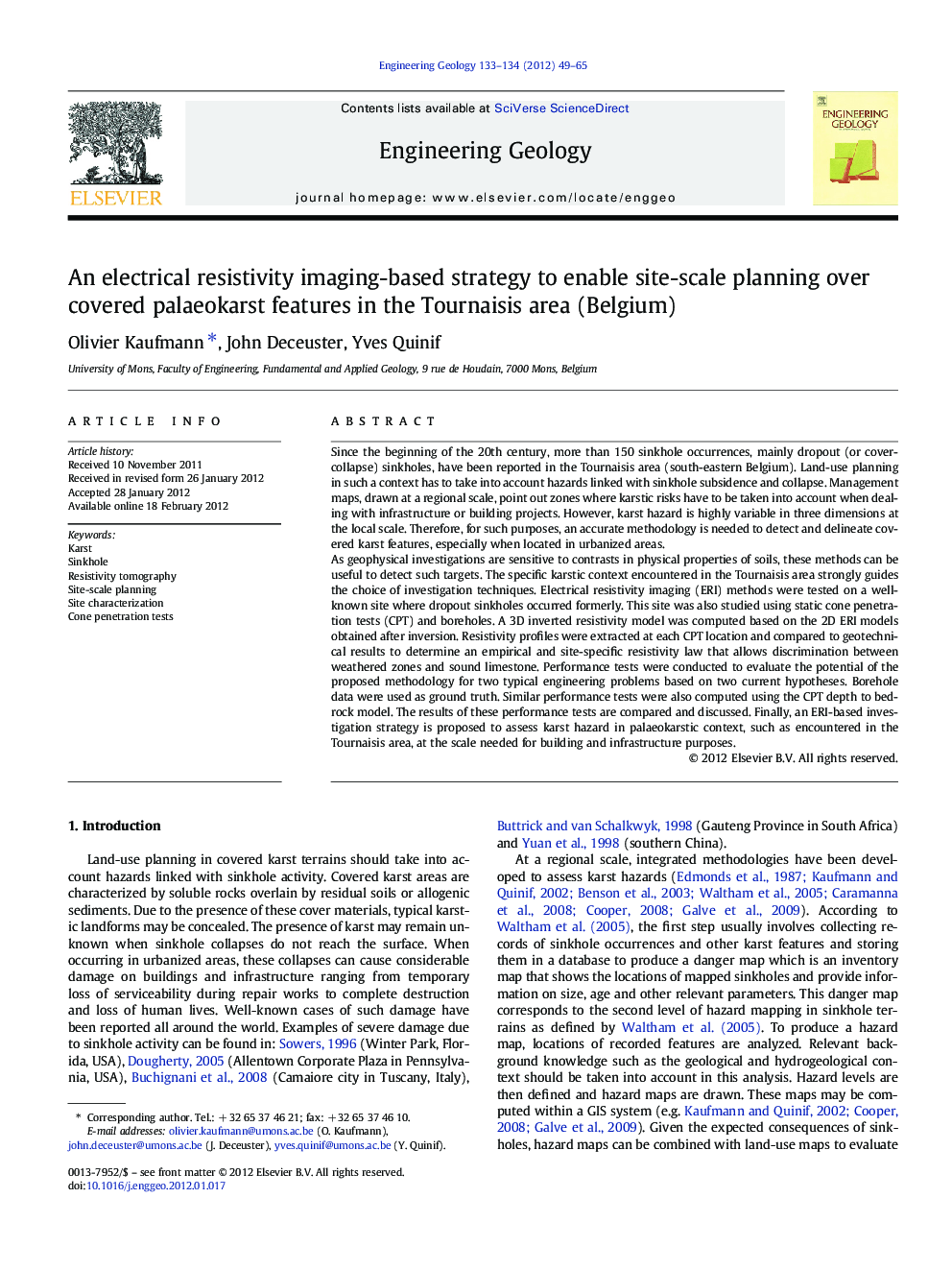 Since the beginning of the 20th century, more than 150 sinkhole occurrences, mainly dropout (or cover-collapse) sinkholes, have been reported in the Tournaisis area (south-eastern Belgium). Land-use planning in such a context has to take into account hazards linked with sinkhole subsidence and collapse. Management maps, drawn at a regional scale, point out zones where karstic risks have to be taken into account when dealing with infrastructure or building projects. However, karst hazard is highly variable in three dimensions at the local scale. Therefore, for such purposes, an accurate methodology is needed to detect and delineate covered karst features, especially when located in urbanized areas.As geophysical investigations are sensitive to contrasts in physical properties of soils, these methods can be useful to detect such targets. The specific karstic context encountered in the Tournaisis area strongly guides the choice of investigation techniques. Electrical resistivity imaging (ERI) methods were tested on a well-known site where dropout sinkholes occurred formerly. This site was also studied using static cone penetration tests (CPT) and boreholes. A 3D inverted resistivity model was computed based on the 2D ERI models obtained after inversion. Resistivity profiles were extracted at each CPT location and compared to geotechnical results to determine an empirical and site-specific resistivity law that allows discrimination between weathered zones and sound limestone. Performance tests were conducted to evaluate the potential of the proposed methodology for two typical engineering problems based on two current hypotheses. Borehole data were used as ground truth. Similar performance tests were also computed using the CPT depth to bedrock model. The results of these performance tests are compared and discussed. Finally, an ERI-based investigation strategy is proposed to assess karst hazard in palaeokarstic context, such as encountered in the Tournaisis area, at the scale needed for building and infrastructure purposes.

► An ERI based strategy is developed to detect covered karst features at site scale.
► A resistivity law was computed to classify blocks as sound rock or karstic features.
► ERI interpreted depth to bedrock model is compared to CPT depth to bedrock model.
► Performance tests were conducted to assess the reliability of the proposed strategy.
► Two hypotheses are tested considering two current engineering problems.