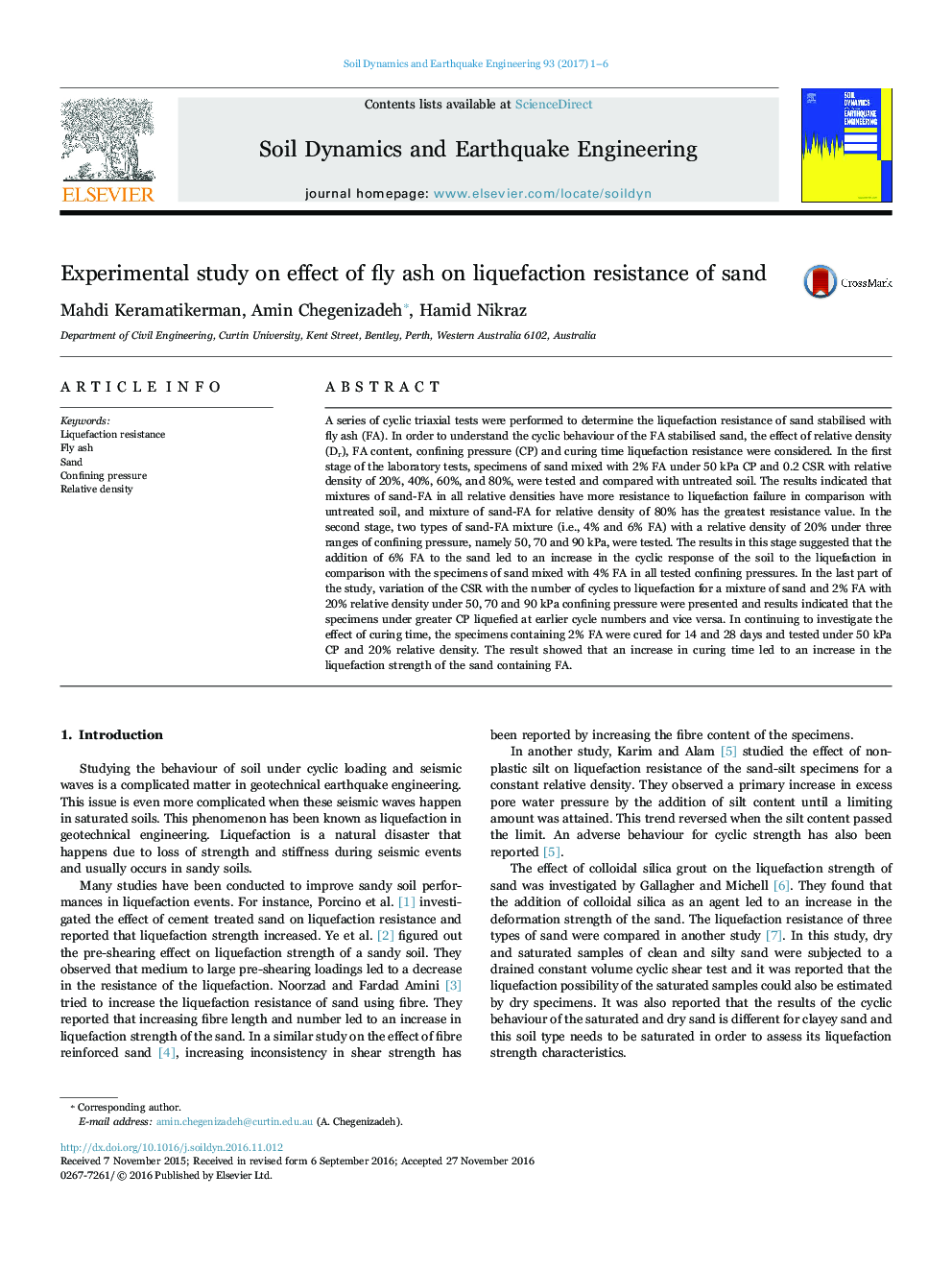 چکیده انگلیسی
A series of cyclic triaxial tests were performed to determine the liquefaction resistance of sand stabilised with flyÂ ash (FA). In order to understand the cyclic behaviour of the FA stabilised sand, the effect of relative density (Dr), FA content, confining pressure (CP) and curing time liquefaction resistance were considered. In the first stage of the laboratory tests, specimens of sand mixed with 2% FA under 50 kPa CP and 0.2 CSR with relative density of 20%, 40%, 60%, and 80%, were tested and compared with untreated soil. The results indicated that mixtures of sand-FA in all relative densities have more resistance to liquefaction failure in comparison with untreated soil, and mixture of sand-FA for relative density of 80% has the greatest resistance value. In the second stage, two types of sand-FA mixture (i.e., 4% and 6% FA) with a relative density of 20% under three ranges of confining pressure, namely 50, 70 and 90 kPa, were tested. The results in this stage suggested that the addition of 6% FA to the sand led to an increase in the cyclic response of the soil to the liquefaction in comparison with the specimens of sand mixed with 4% FA in all tested confining pressures. In the last part of the study, variation of the CSR with the number of cycles to liquefaction for a mixture of sand and 2% FA with 20% relative density under 50, 70 and 90 kPa confining pressure were presented and results indicated that the specimens under greater CP liquefied at earlier cycle numbers and vice versa. In continuing to investigate the effect of curing time, the specimens containing 2% FA were cured for 14 and 28 days and tested under 50 kPa CP and 20% relative density. The result showed that an increase in curing time led to an increase in the liquefaction strength of the sand containing FA.
ناشر
Database: Elsevier - ScienceDirect (ساینس دایرکت)
Journal: Soil Dynamics and Earthquake Engineering - Volume 93, February 2017, Pages 1-6
نویسندگان
Mahdi Keramatikerman, Amin Chegenizadeh, Hamid Nikraz,
دانلود مقاله + سفارش ترجمه
دانلود مقاله ISI انگلیسی
رایگان برای ایرانیان
سفارش ترجمه تخصصی
با تضمین قیمت و کیفیت
منتشر شده در