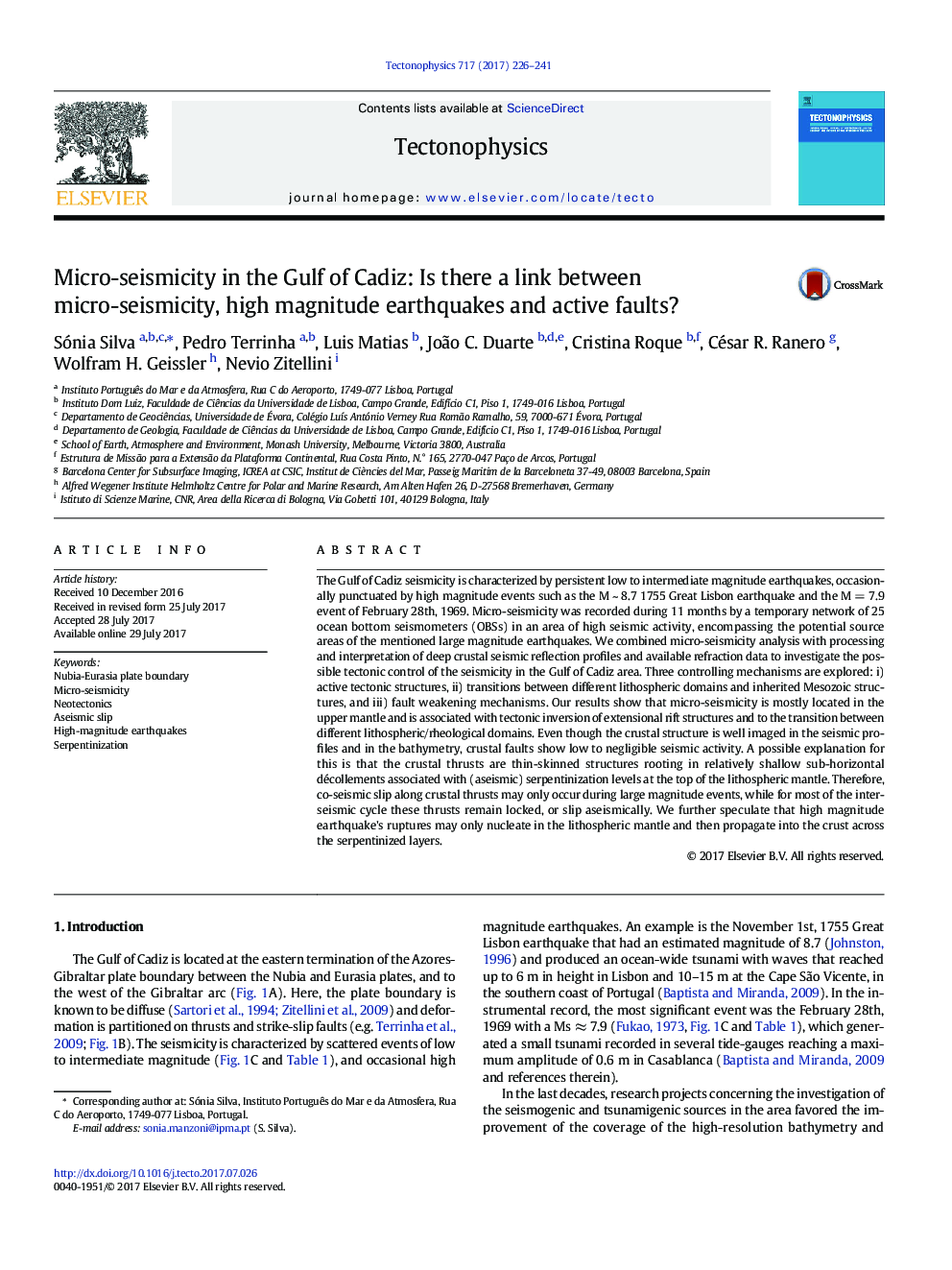 - Revisitation of a seismic dataset coming from a temporary ocean bottom seismometers network in the Gulf of Cadiz area.
- Micro-seismicity is concentrated in three seismic clusters and the lithospheric upper mantle.
- Active crustal thrust faults show low to inexistent seismic activity.
- The existence of aseismic slip controlled by serpentinization levels is discussed.
- Slip during local high magnitudes events could be favored by fault weakening mechanisms.

The Gulf of Cadiz seismicity is characterized by persistent low to intermediate magnitude earthquakes, occasionally punctuated by high magnitude events such as the MÂ ~Â 8.7 1755 Great Lisbon earthquake and the MÂ =Â 7.9 event of February 28th, 1969. Micro-seismicity was recorded during 11Â months by a temporary network of 25 ocean bottom seismometers (OBSs) in an area of high seismic activity, encompassing the potential source areas of the mentioned large magnitude earthquakes. We combined micro-seismicity analysis with processing and interpretation of deep crustal seismic reflection profiles and available refraction data to investigate the possible tectonic control of the seismicity in the Gulf of Cadiz area. Three controlling mechanisms are explored: i) active tectonic structures, ii) transitions between different lithospheric domains and inherited Mesozoic structures, and iii) fault weakening mechanisms. Our results show that micro-seismicity is mostly located in the upper mantle and is associated with tectonic inversion of extensional rift structures and to the transition between different lithospheric/rheological domains. Even though the crustal structure is well imaged in the seismic profiles and in the bathymetry, crustal faults show low to negligible seismic activity. A possible explanation for this is that the crustal thrusts are thin-skinned structures rooting in relatively shallow sub-horizontal décollements associated with (aseismic) serpentinization levels at the top of the lithospheric mantle. Therefore, co-seismic slip along crustal thrusts may only occur during large magnitude events, while for most of the inter-seismic cycle these thrusts remain locked, or slip aseismically. We further speculate that high magnitude earthquake's ruptures may only nucleate in the lithospheric mantle and then propagate into the crust across the serpentinized layers.