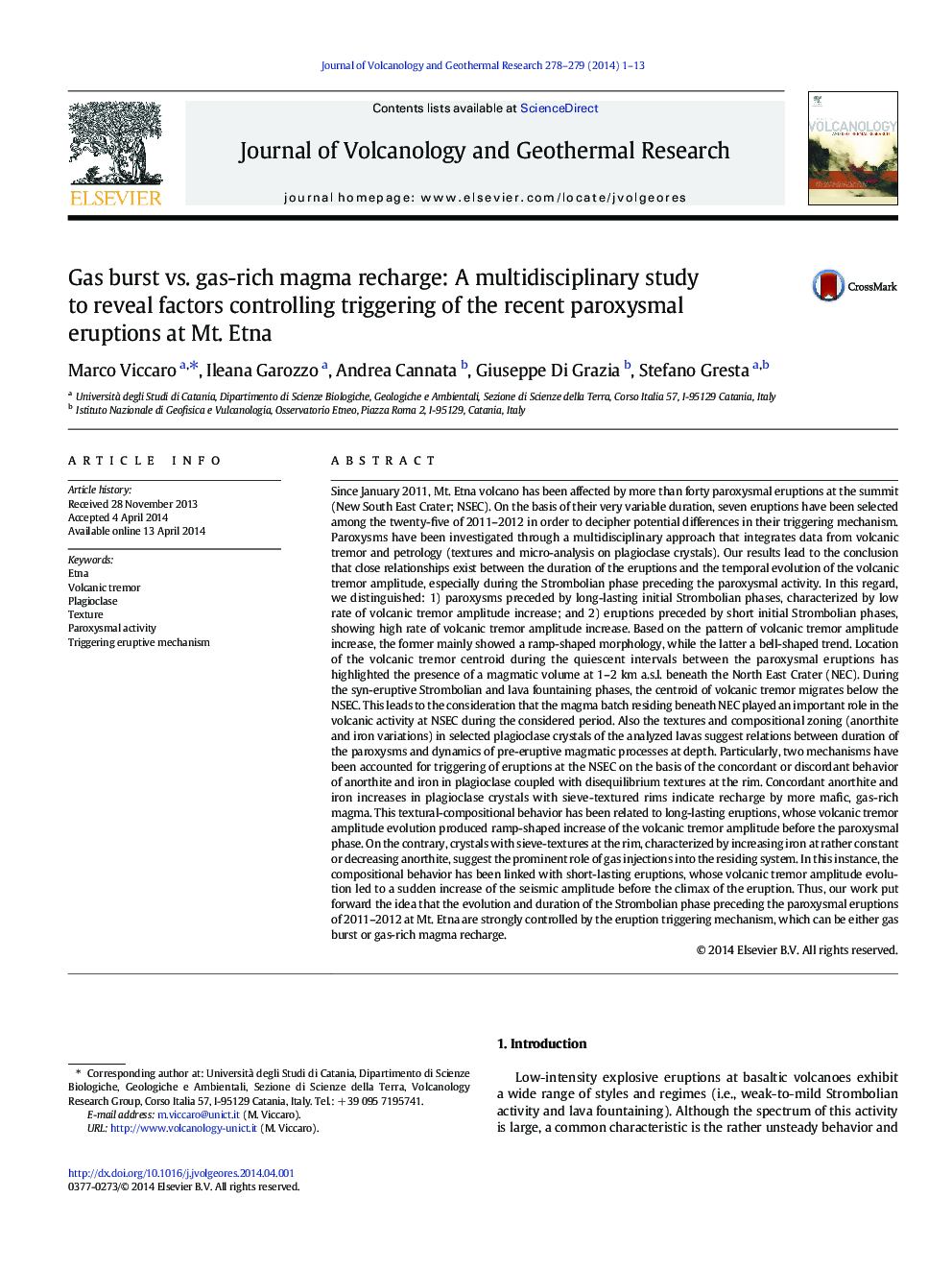 چکیده انگلیسی
Since January 2011, Mt. Etna volcano has been affected by more than forty paroxysmal eruptions at the summit (New South East Crater; NSEC). On the basis of their very variable duration, seven eruptions have been selected among the twenty-five of 2011-2012 in order to decipher potential differences in their triggering mechanism. Paroxysms have been investigated through a multidisciplinary approach that integrates data from volcanic tremor and petrology (textures and micro-analysis on plagioclase crystals). Our results lead to the conclusion that close relationships exist between the duration of the eruptions and the temporal evolution of the volcanic tremor amplitude, especially during the Strombolian phase preceding the paroxysmal activity. In this regard, we distinguished: 1) paroxysms preceded by long-lasting initial Strombolian phases, characterized by low rate of volcanic tremor amplitude increase; and 2) eruptions preceded by short initial Strombolian phases, showing high rate of volcanic tremor amplitude increase. Based on the pattern of volcanic tremor amplitude increase, the former mainly showed a ramp-shaped morphology, while the latter a bell-shaped trend. Location of the volcanic tremor centroid during the quiescent intervals between the paroxysmal eruptions has highlighted the presence of a magmatic volume at 1-2Â kmÂ a.s.l. beneath the North East Crater (NEC). During the syn-eruptive Strombolian and lava fountaining phases, the centroid of volcanic tremor migrates below the NSEC. This leads to the consideration that the magma batch residing beneath NEC played an important role in the volcanic activity at NSEC during the considered period. Also the textures and compositional zoning (anorthite and iron variations) in selected plagioclase crystals of the analyzed lavas suggest relations between duration of the paroxysms and dynamics of pre-eruptive magmatic processes at depth. Particularly, two mechanisms have been accounted for triggering of eruptions at the NSEC on the basis of the concordant or discordant behavior of anorthite and iron in plagioclase coupled with disequilibrium textures at the rim. Concordant anorthite and iron increases in plagioclase crystals with sieve-textured rims indicate recharge by more mafic, gas-rich magma. This textural-compositional behavior has been related to long-lasting eruptions, whose volcanic tremor amplitude evolution produced ramp-shaped increase of the volcanic tremor amplitude before the paroxysmal phase. On the contrary, crystals with sieve-textures at the rim, characterized by increasing iron at rather constant or decreasing anorthite, suggest the prominent role of gas injections into the residing system. In this instance, the compositional behavior has been linked with short-lasting eruptions, whose volcanic tremor amplitude evolution led to a sudden increase of the seismic amplitude before the climax of the eruption. Thus, our work put forward the idea that the evolution and duration of the Strombolian phase preceding the paroxysmal eruptions of 2011-2012 at Mt. Etna are strongly controlled by the eruption triggering mechanism, which can be either gas burst or gas-rich magma recharge.
ناشر
Database: Elsevier - ScienceDirect (ساینس دایرکت)
Journal: Journal of Volcanology and Geothermal Research - Volumes 278â279, 15 May 2014, Pages 1-13
نویسندگان
Marco Viccaro, Ileana Garozzo, Andrea Cannata, Giuseppe Di Grazia, Stefano Gresta,
دانلود مقاله + سفارش ترجمه
دانلود مقاله ISI انگلیسی
رایگان برای ایرانیان
سفارش ترجمه تخصصی
با تضمین قیمت و کیفیت
منتشر شده در