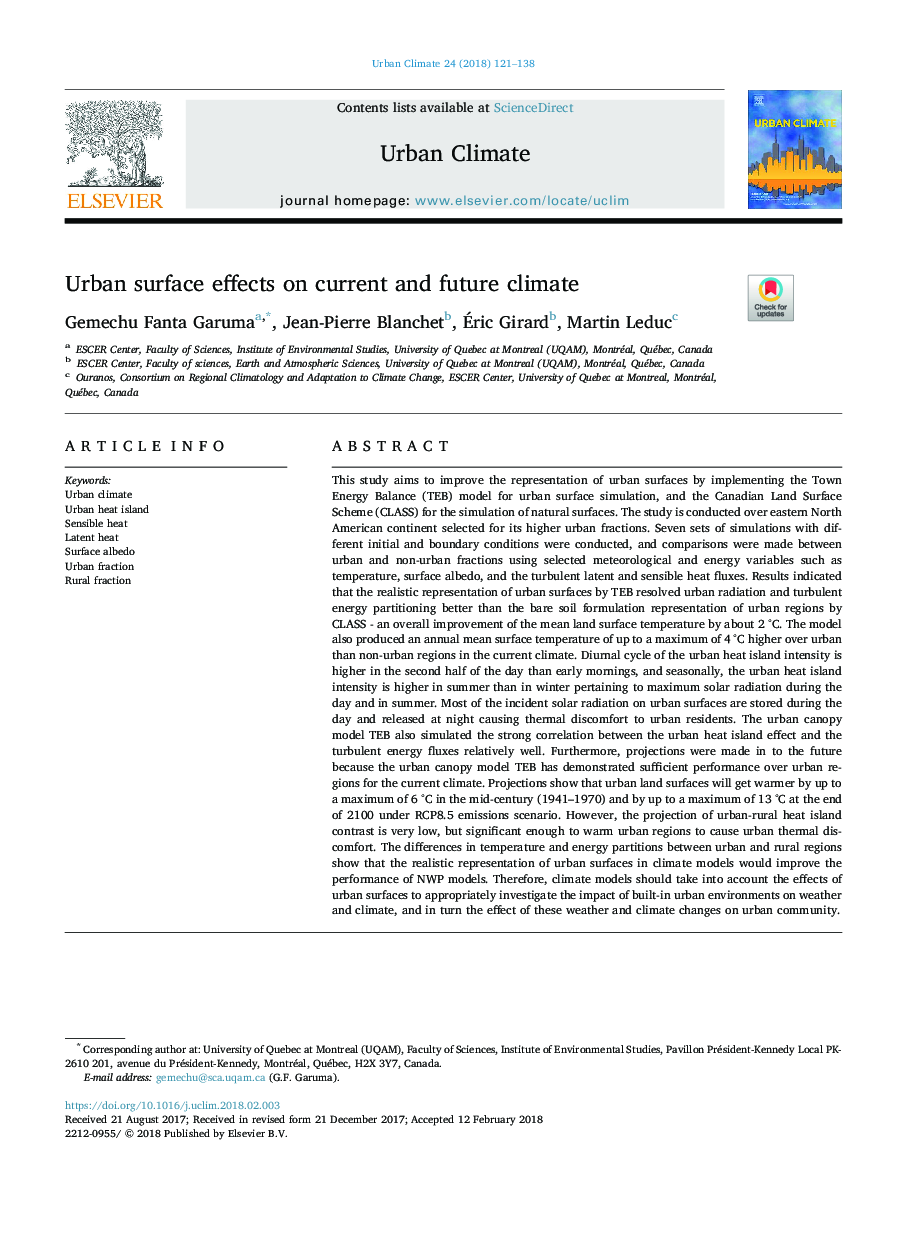 چکیده انگلیسی
This study aims to improve the representation of urban surfaces by implementing the Town Energy Balance (TEB) model for urban surface simulation, and the Canadian Land Surface Scheme (CLASS) for the simulation of natural surfaces. The study is conducted over eastern North American continent selected for its higher urban fractions. Seven sets of simulations with different initial and boundary conditions were conducted, and comparisons were made between urban and non-urban fractions using selected meteorological and energy variables such as temperature, surface albedo, and the turbulent latent and sensible heat fluxes. Results indicated that the realistic representation of urban surfaces by TEB resolved urban radiation and turbulent energy partitioning better than the bare soil formulation representation of urban regions by CLASS - an overall improvement of the mean land surface temperature by about 2 Â°C. The model also produced an annual mean surface temperature of up to a maximum of 4 Â°C higher over urban than non-urban regions in the current climate. Diurnal cycle of the urban heat island intensity is higher in the second half of the day than early mornings, and seasonally, the urban heat island intensity is higher in summer than in winter pertaining to maximum solar radiation during the day and in summer. Most of the incident solar radiation on urban surfaces are stored during the day and released at night causing thermal discomfort to urban residents. The urban canopy model TEB also simulated the strong correlation between the urban heat island effect and the turbulent energy fluxes relatively well. Furthermore, projections were made in to the future because the urban canopy model TEB has demonstrated sufficient performance over urban regions for the current climate. Projections show that urban land surfaces will get warmer by up to a maximum of 6 Â°C in the mid-century (1941-1970) and by up to a maximum of 13 Â°C at the end of 2100 under RCP8.5 emissions scenario. However, the projection of urban-rural heat island contrast is very low, but significant enough to warm urban regions to cause urban thermal discomfort. The differences in temperature and energy partitions between urban and rural regions show that the realistic representation of urban surfaces in climate models would improve the performance of NWP models. Therefore, climate models should take into account the effects of urban surfaces to appropriately investigate the impact of built-in urban environments on weather and climate, and in turn the effect of these weather and climate changes on urban community.
ناشر
Database: Elsevier - ScienceDirect (ساینس دایرکت)
Journal: Urban Climate - Volume 24, June 2018, Pages 121-138
نویسندگان
Gemechu Fanta Garuma, Jean-Pierre Blanchet, Ãric Girard, Martin Leduc,
دانلود مقاله + سفارش ترجمه
دانلود مقاله ISI انگلیسی
رایگان برای ایرانیان
سفارش ترجمه تخصصی
با تضمین قیمت و کیفیت
منتشر شده در