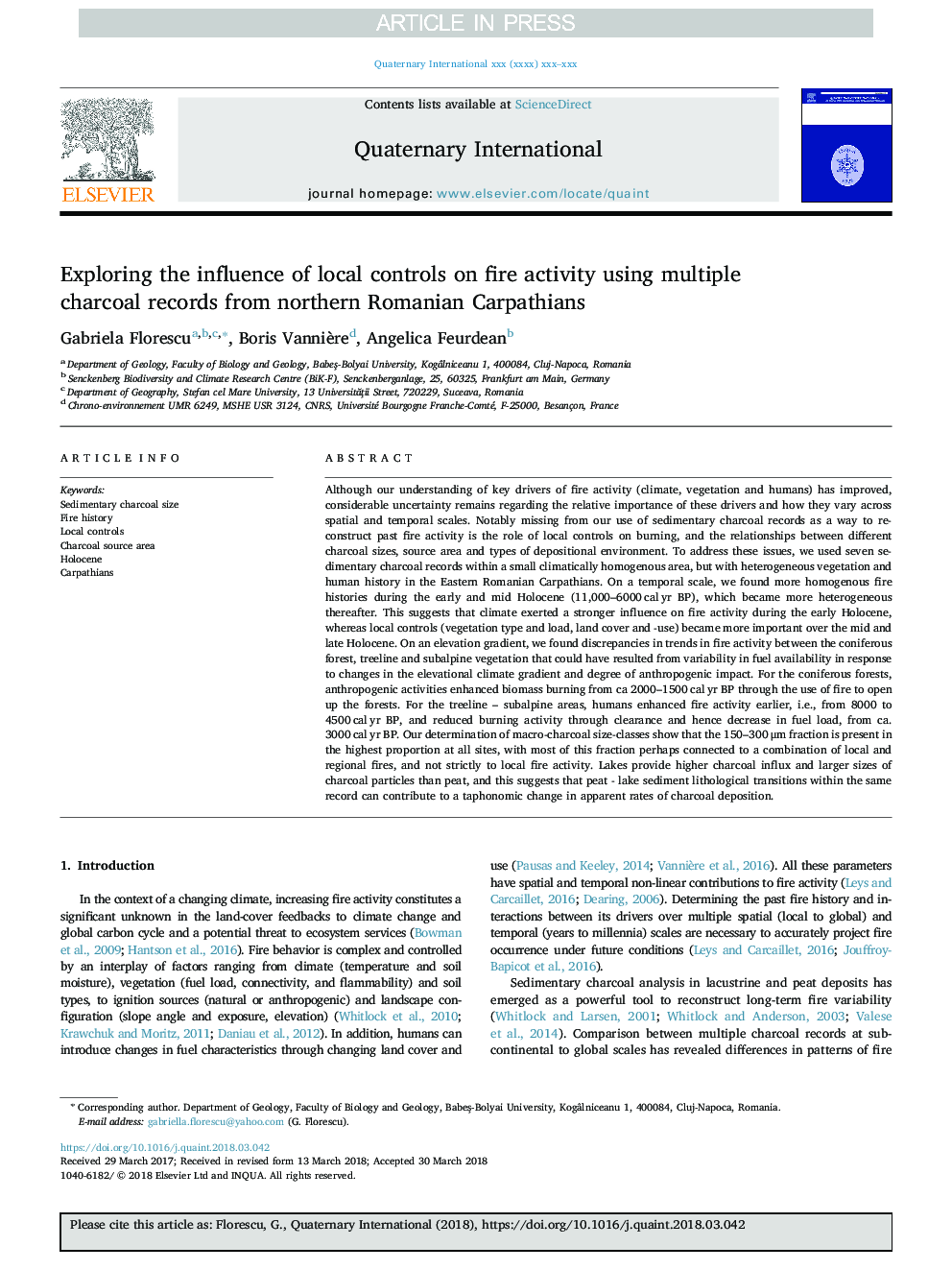 چکیده انگلیسی
Although our understanding of key drivers of fire activity (climate, vegetation and humans) has improved, considerable uncertainty remains regarding the relative importance of these drivers and how they vary across spatial and temporal scales. Notably missing from our use of sedimentary charcoal records as a way to reconstruct past fire activity is the role of local controls on burning, and the relationships between different charcoal sizes, source area and types of depositional environment. To address these issues, we used seven sedimentary charcoal records within a small climatically homogenous area, but with heterogeneous vegetation and human history in the Eastern Romanian Carpathians. On a temporal scale, we found more homogenous fire histories during the early and mid Holocene (11,000-6000â¯calâ¯yr BP), which became more heterogeneous thereafter. This suggests that climate exerted a stronger influence on fire activity during the early Holocene, whereas local controls (vegetation type and load, land cover and -use) became more important over the mid and late Holocene. On an elevation gradient, we found discrepancies in trends in fire activity between the coniferous forest, treeline and subalpine vegetation that could have resulted from variability in fuel availability in response to changes in the elevational climate gradient and degree of anthropogenic impact. For the coniferous forests, anthropogenic activities enhanced biomass burning from ca 2000-1500â¯calâ¯yr BP through the use of fire to open up the forests. For the treeline - subalpine areas, humans enhanced fire activity earlier, i.e., from 8000 to 4500â¯calâ¯yr BP, and reduced burning activity through clearance and hence decrease in fuel load, from ca. 3000â¯calâ¯yr BP. Our determination of macro-charcoal size-classes show that the 150-300â¯Î¼m fraction is present in the highest proportion at all sites, with most of this fraction perhaps connected to a combination of local and regional fires, and not strictly to local fire activity. Lakes provide higher charcoal influx and larger sizes of charcoal particles than peat, and this suggests that peat - lake sediment lithological transitions within the same record can contribute to a taphonomic change in apparent rates of charcoal deposition.
ناشر
Database: Elsevier - ScienceDirect (ساینس دایرکت)
Journal: Quaternary International - Volume 488, 20 September 2018, Pages 41-57
نویسندگان
Gabriela Florescu, Boris VanniÃ¨re, Angelica Feurdean,
دانلود مقاله + سفارش ترجمه
دانلود مقاله ISI انگلیسی
رایگان برای ایرانیان
سفارش ترجمه تخصصی
با تضمین قیمت و کیفیت
منتشر شده در