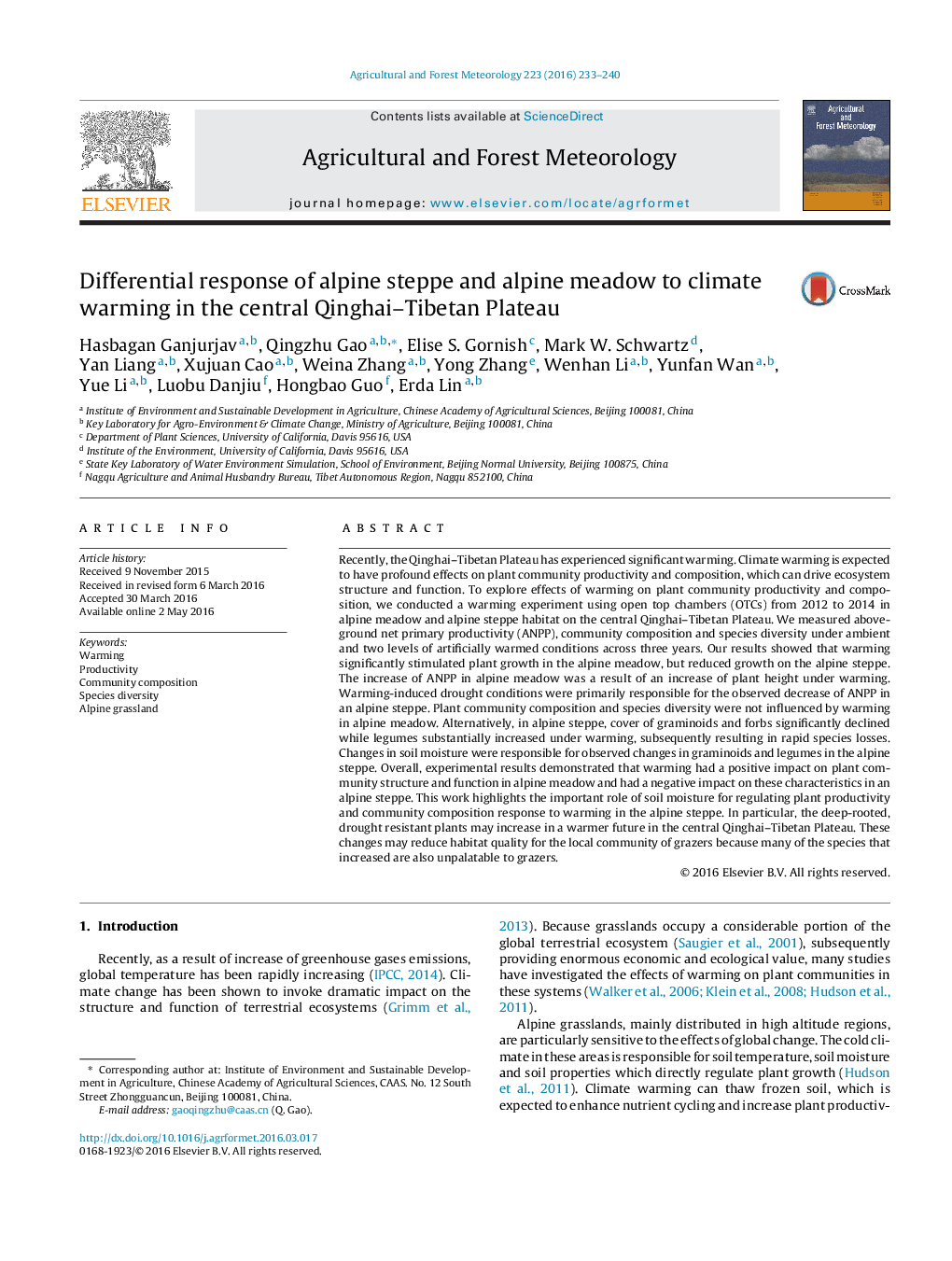 • Soil moisture could regulate response of ANPP and plant composition to warming.
• Warming has different effects on meadow and steppe due to different soil water.
• Warming increased plant productivity in meadow but decreased productivity in steppe.
• Drought resistant plants increased in steppe and remain unchanged in meadow.
• Habitat quality may decrease in future because the increased plants are unpalatable.

Recently, the Qinghai–Tibetan Plateau has experienced significant warming. Climate warming is expected to have profound effects on plant community productivity and composition, which can drive ecosystem structure and function. To explore effects of warming on plant community productivity and composition, we conducted a warming experiment using open top chambers (OTCs) from 2012 to 2014 in alpine meadow and alpine steppe habitat on the central Qinghai–Tibetan Plateau. We measured aboveground net primary productivity (ANPP), community composition and species diversity under ambient and two levels of artificially warmed conditions across three years. Our results showed that warming significantly stimulated plant growth in the alpine meadow, but reduced growth on the alpine steppe. The increase of ANPP in alpine meadow was a result of an increase of plant height under warming. Warming-induced drought conditions were primarily responsible for the observed decrease of ANPP in an alpine steppe. Plant community composition and species diversity were not influenced by warming in alpine meadow. Alternatively, in alpine steppe, cover of graminoids and forbs significantly declined while legumes substantially increased under warming, subsequently resulting in rapid species losses. Changes in soil moisture were responsible for observed changes in graminoids and legumes in the alpine steppe. Overall, experimental results demonstrated that warming had a positive impact on plant community structure and function in alpine meadow and had a negative impact on these characteristics in an alpine steppe. This work highlights the important role of soil moisture for regulating plant productivity and community composition response to warming in the alpine steppe. In particular, the deep-rooted, drought resistant plants may increase in a warmer future in the central Qinghai–Tibetan Plateau. These changes may reduce habitat quality for the local community of grazers because many of the species that increased are also unpalatable to grazers.