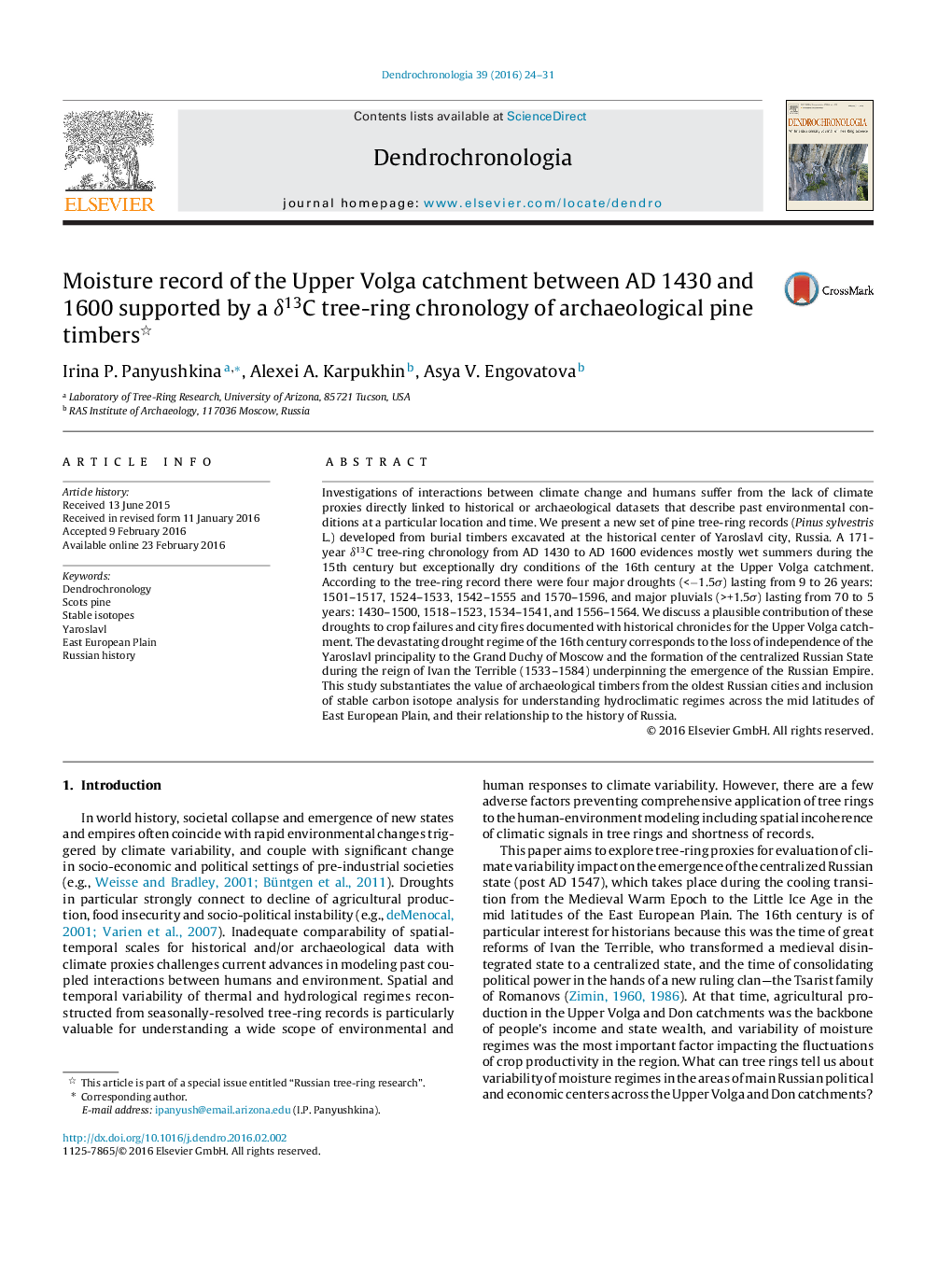 • Study of the relationship between the emergence of the centralized Russian State in the 16th Century and environmental change.
• A new moisture record in the Upper Volga catchment from δ13C tree rings of Yaroslavl archaeological timbers.
• The unprecedented droughts of the 16th Century contributed to the historical crop failures and city fires.
• The value of archaeological timbers as hydroclimate proxies in the mid latitudes of temperate Russia is demonstrated.

Investigations of interactions between climate change and humans suffer from the lack of climate proxies directly linked to historical or archaeological datasets that describe past environmental conditions at a particular location and time. We present a new set of pine tree-ring records (Pinus sylvestris L.) developed from burial timbers excavated at the historical center of Yaroslavl city, Russia. A 171-year δ13C tree-ring chronology from AD 1430 to AD 1600 evidences mostly wet summers during the 15th century but exceptionally dry conditions of the 16th century at the Upper Volga catchment. According to the tree-ring record there were four major droughts (<−1.5σ) lasting from 9 to 26 years: 1501–1517, 1524–1533, 1542–1555 and 1570–1596, and major pluvials (>+1.5σ) lasting from 70 to 5 years: 1430–1500, 1518–1523, 1534–1541, and 1556–1564. We discuss a plausible contribution of these droughts to crop failures and city fires documented with historical chronicles for the Upper Volga catchment. The devastating drought regime of the 16th century corresponds to the loss of independence of the Yaroslavl principality to the Grand Duchy of Moscow and the formation of the centralized Russian State during the reign of Ivan the Terrible (1533–1584) underpinning the emergence of the Russian Empire. This study substantiates the value of archaeological timbers from the oldest Russian cities and inclusion of stable carbon isotope analysis for understanding hydroclimatic regimes across the mid latitudes of East European Plain, and their relationship to the history of Russia.