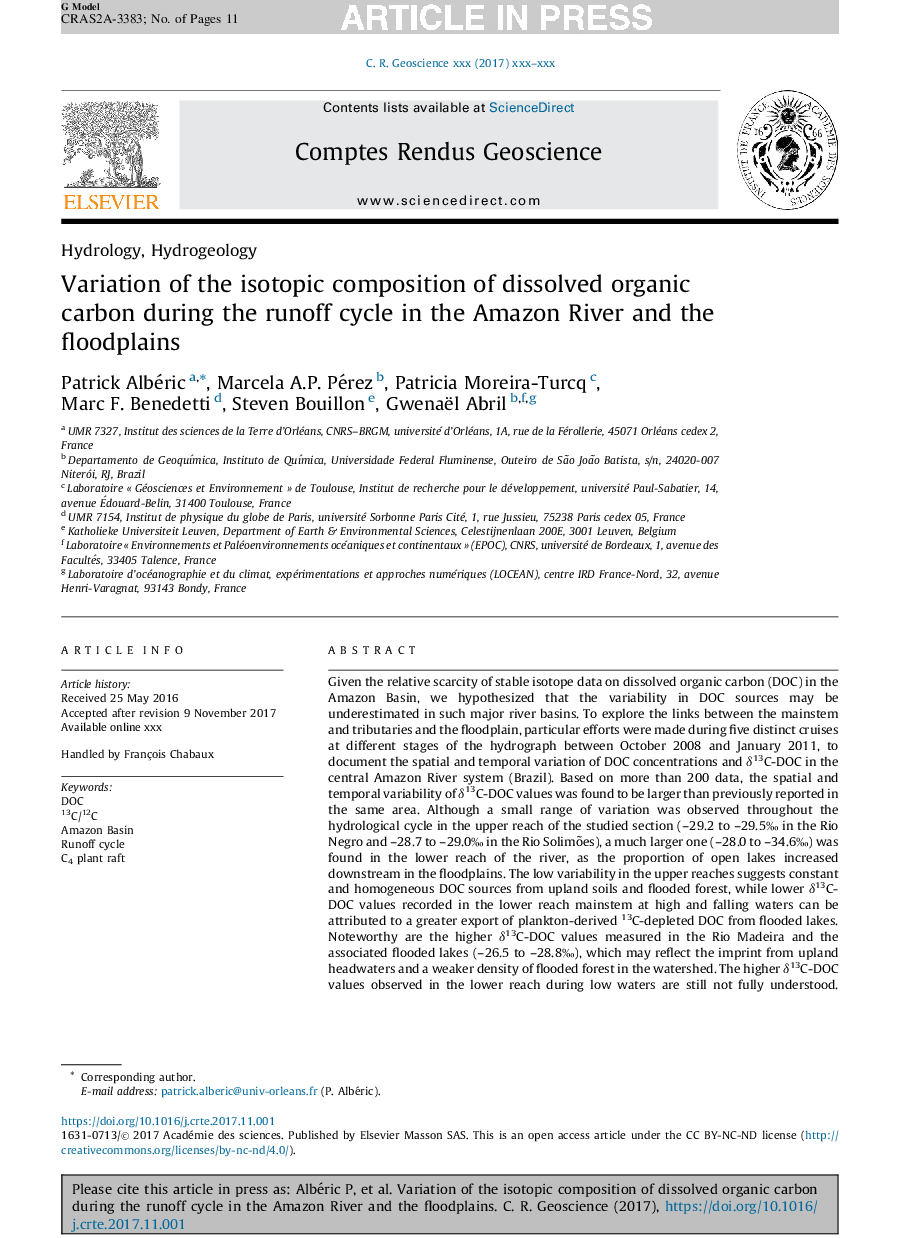 چکیده انگلیسی
Given the relative scarcity of stable isotope data on dissolved organic carbon (DOC) in the Amazon Basin, we hypothesized that the variability in DOC sources may be underestimated in such major river basins. To explore the links between the mainstem and tributaries and the floodplain, particular efforts were made during five distinct cruises at different stages of the hydrograph between October 2008 and January 2011, to document the spatial and temporal variation of DOC concentrations and Î´13C-DOC in the central Amazon River system (Brazil). Based on more than 200 data, the spatial and temporal variability of Î´13C-DOC values was found to be larger than previously reported in the same area. Although a small range of variation was observed throughout the hydrological cycle in the upper reach of the studied section (-29.2 to -29.5â° in the Rio Negro and -28.7 to -29.0â° in the Rio SolimÃµes), a much larger one (-28.0 to -34.6â°) was found in the lower reach of the river, as the proportion of open lakes increased downstream in the floodplains. The low variability in the upper reaches suggests constant and homogeneous DOC sources from upland soils and flooded forest, while lower Î´13C-DOC values recorded in the lower reach mainstem at high and falling waters can be attributed to a greater export of plankton-derived 13C-depleted DOC from flooded lakes. Noteworthy are the higher Î´13C-DOC values measured in the Rio Madeira and the associated flooded lakes (-26.5 to -28.8â°), which may reflect the imprint from upland headwaters and a weaker density of flooded forest in the watershed. The higher Î´13C-DOC values observed in the lower reach during low waters are still not fully understood. Floating meadows principally consisting of C4 macrophytes were found to increase Î´13C-DOC values by â¼1.5â° in their vicinity, but this impact was no longer noticeable at distances of â¼10Â m from the plant rafts. This rather modest 13C-enrichment suggests rapid decomposition and/or dilution of this wetland-derived DOC.
ناشر
Database: Elsevier - ScienceDirect (ساینس دایرکت)
Journal: Comptes Rendus Geoscience - Volume 350, Issues 1â2, JanuaryâFebruary 2018, Pages 65-75
نویسندگان
Patrick Albéric, Marcela A.P. Pérez, Patricia Moreira-Turcq, Marc F. Benedetti, Steven Bouillon, Gwenaël Abril,
دانلود مقاله + سفارش ترجمه
دانلود مقاله ISI انگلیسی
رایگان برای ایرانیان
سفارش ترجمه تخصصی
با تضمین قیمت و کیفیت
منتشر شده در