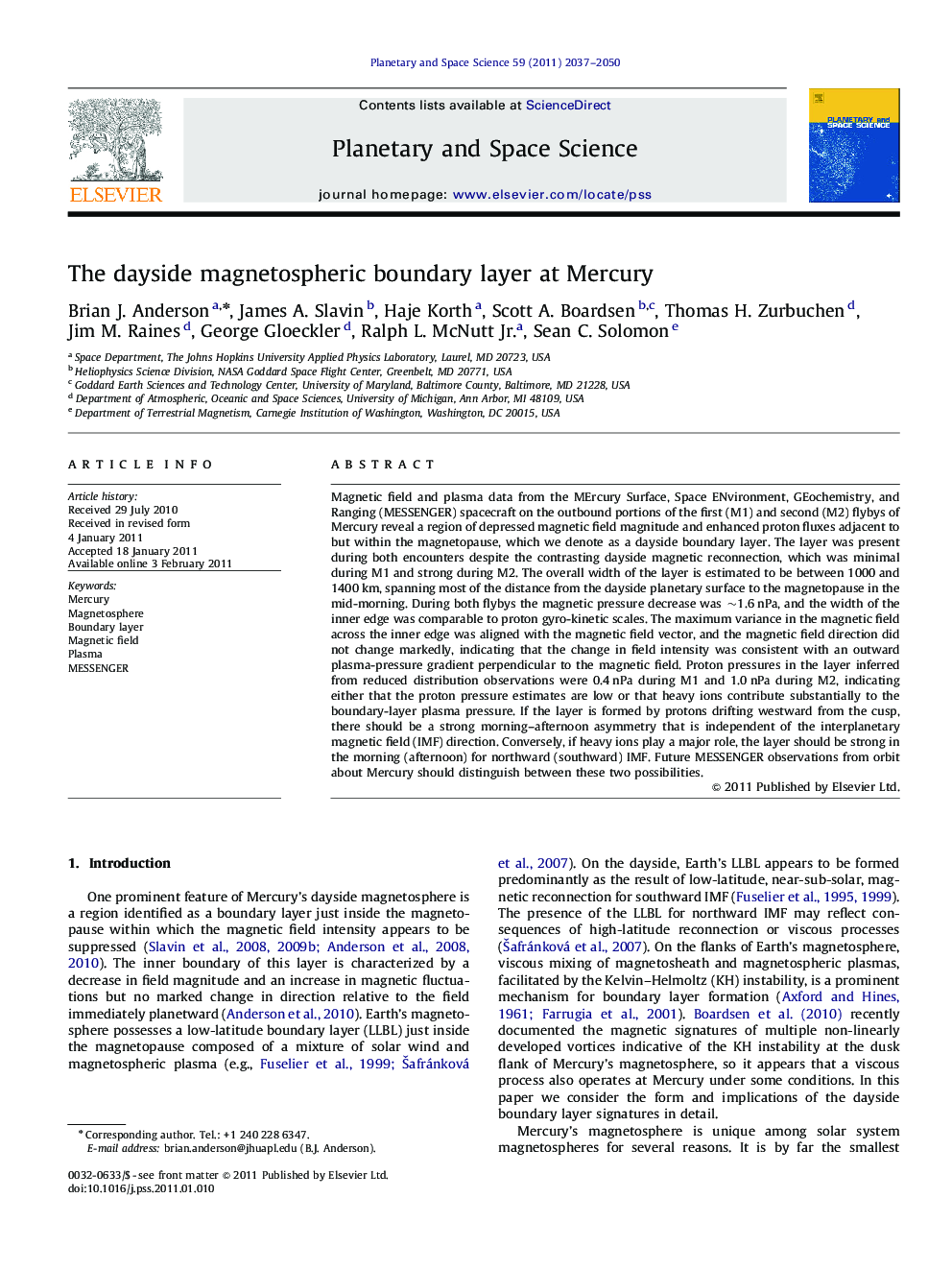 Magnetic field and plasma data from the MErcury Surface, Space ENvironment, GEochemistry, and Ranging (MESSENGER) spacecraft on the outbound portions of the first (M1) and second (M2) flybys of Mercury reveal a region of depressed magnetic field magnitude and enhanced proton fluxes adjacent to but within the magnetopause, which we denote as a dayside boundary layer. The layer was present during both encounters despite the contrasting dayside magnetic reconnection, which was minimal during M1 and strong during M2. The overall width of the layer is estimated to be between 1000 and 1400 km, spanning most of the distance from the dayside planetary surface to the magnetopause in the mid-morning. During both flybys the magnetic pressure decrease was ∼1.6 nPa, and the width of the inner edge was comparable to proton gyro-kinetic scales. The maximum variance in the magnetic field across the inner edge was aligned with the magnetic field vector, and the magnetic field direction did not change markedly, indicating that the change in field intensity was consistent with an outward plasma-pressure gradient perpendicular to the magnetic field. Proton pressures in the layer inferred from reduced distribution observations were 0.4 nPa during M1 and 1.0 nPa during M2, indicating either that the proton pressure estimates are low or that heavy ions contribute substantially to the boundary-layer plasma pressure. If the layer is formed by protons drifting westward from the cusp, there should be a strong morning–afternoon asymmetry that is independent of the interplanetary magnetic field (IMF) direction. Conversely, if heavy ions play a major role, the layer should be strong in the morning (afternoon) for northward (southward) IMF. Future MESSENGER observations from orbit about Mercury should distinguish between these two possibilities.

► A dayside boundary layer is present in the outer 1000 km of Mercury's magnetosphere.
► Magnetic field strength is depressed by one third implying enhanced plasma pressure.
► Increased proton counts and waves indicate enhanced proton pressures.
► Cusp entry of protons would produce a layer only in the morning.
► MESSENGER data from orbit will show if the layer can also occur in the afternoon.