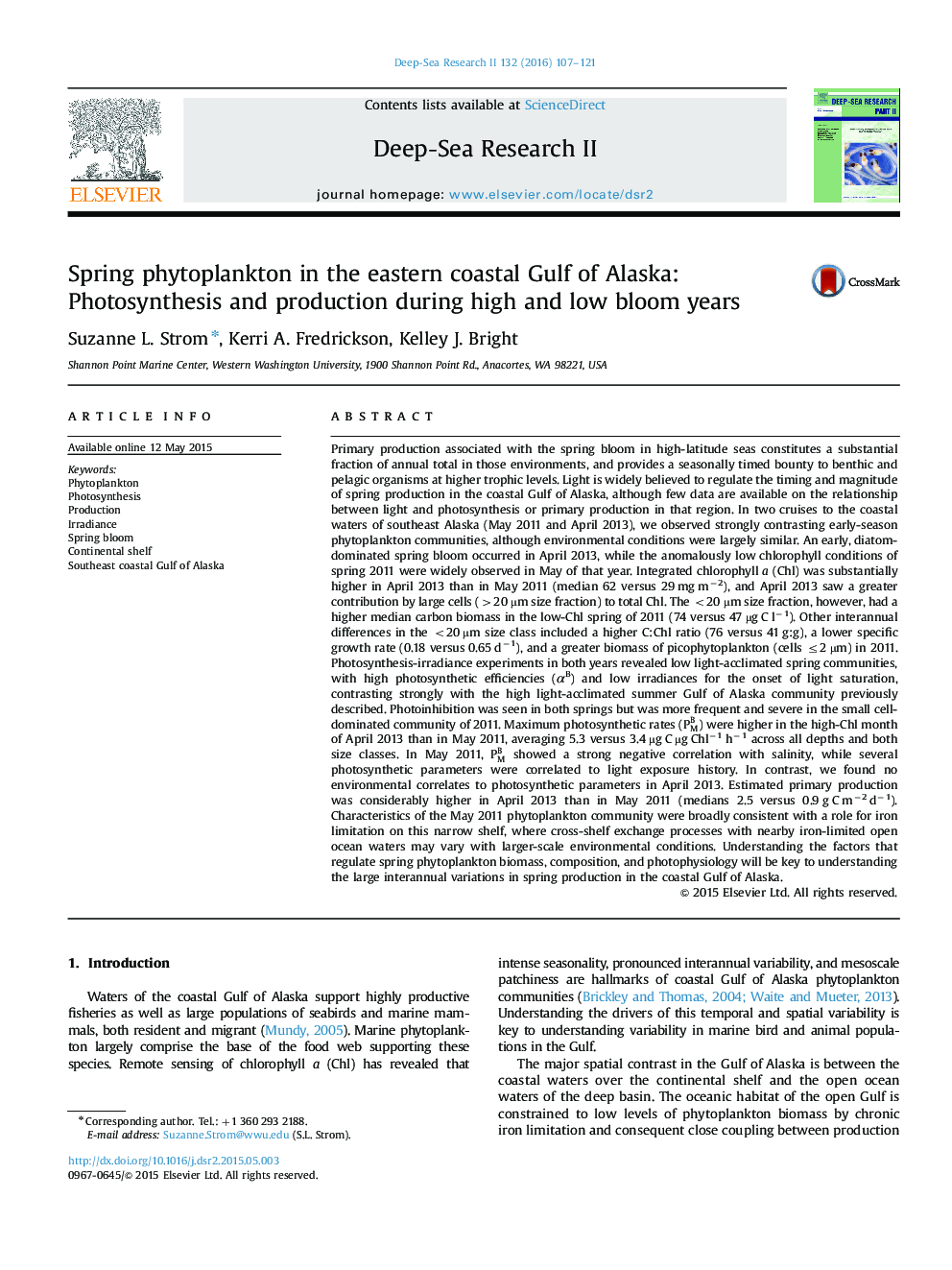 Primary production associated with the spring bloom in high-latitude seas constitutes a substantial fraction of annual total in those environments, and provides a seasonally timed bounty to benthic and pelagic organisms at higher trophic levels. Light is widely believed to regulate the timing and magnitude of spring production in the coastal Gulf of Alaska, although few data are available on the relationship between light and photosynthesis or primary production in that region. In two cruises to the coastal waters of southeast Alaska (May 2011 and April 2013), we observed strongly contrasting early-season phytoplankton communities, although environmental conditions were largely similar. An early, diatom-dominated spring bloom occurred in April 2013, while the anomalously low chlorophyll conditions of spring 2011 were widely observed in May of that year. Integrated chlorophyll a (Chl) was substantially higher in April 2013 than in May 2011 (median 62 versus 29 mg m−2), and April 2013 saw a greater contribution by large cells (>20 µm size fraction) to total Chl. The <20 µm size fraction, however, had a higher median carbon biomass in the low-Chl spring of 2011 (74 versus 47 µg C l−1). Other interannual differences in the <20 µm size class included a higher C:Chl ratio (76 versus 41 g:g), a lower specific growth rate (0.18 versus 0.65 d−1), and a greater biomass of picophytoplankton (cells ≤2 µm) in 2011. Photosynthesis-irradiance experiments in both years revealed low light-acclimated spring communities, with high photosynthetic efficiencies (αB) and low irradiances for the onset of light saturation, contrasting strongly with the high light-acclimated summer Gulf of Alaska community previously described. Photoinhibition was seen in both springs but was more frequent and severe in the small cell-dominated community of 2011. Maximum photosynthetic rates (PMB) were higher in the high-Chl month of April 2013 than in May 2011, averaging 5.3 versus 3.4 µg C µg Chl−1 h−1 across all depths and both size classes. In May 2011, PMB showed a strong negative correlation with salinity, while several photosynthetic parameters were correlated to light exposure history. In contrast, we found no environmental correlates to photosynthetic parameters in April 2013. Estimated primary production was considerably higher in April 2013 than in May 2011 (medians 2.5 versus 0.9 g C m−2 d−1). Characteristics of the May 2011 phytoplankton community were broadly consistent with a role for iron limitation on this narrow shelf, where cross-shelf exchange processes with nearby iron-limited open ocean waters may vary with larger-scale environmental conditions. Understanding the factors that regulate spring phytoplankton biomass, composition, and photophysiology will be key to understanding the large interannual variations in spring production in the coastal Gulf of Alaska.