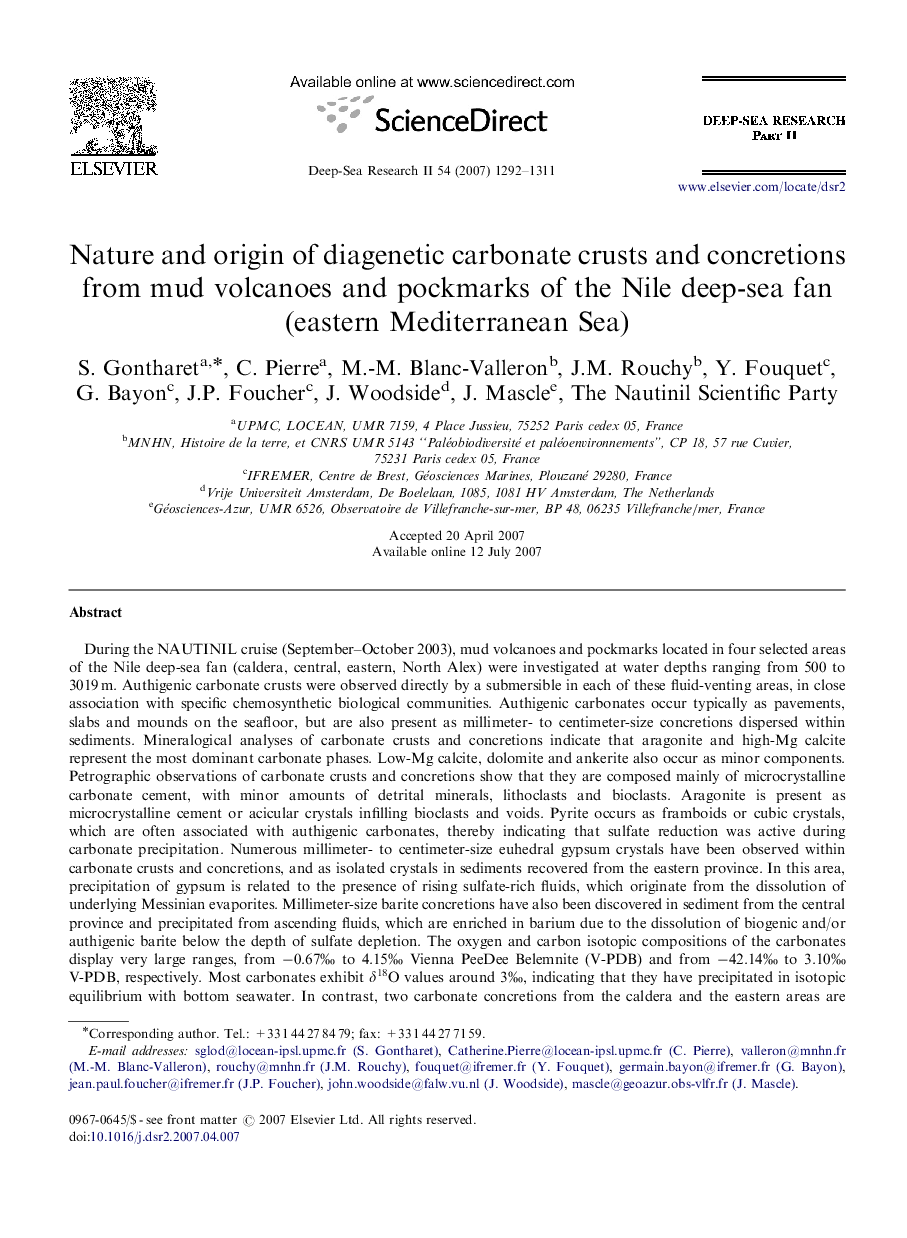 During the NAUTINIL cruise (September–October 2003), mud volcanoes and pockmarks located in four selected areas of the Nile deep-sea fan (caldera, central, eastern, North Alex) were investigated at water depths ranging from 500 to 3019 m. Authigenic carbonate crusts were observed directly by a submersible in each of these fluid-venting areas, in close association with specific chemosynthetic biological communities. Authigenic carbonates occur typically as pavements, slabs and mounds on the seafloor, but are also present as millimeter- to centimeter-size concretions dispersed within sediments. Mineralogical analyses of carbonate crusts and concretions indicate that aragonite and high-Mg calcite represent the most dominant carbonate phases. Low-Mg calcite, dolomite and ankerite also occur as minor components. Petrographic observations of carbonate crusts and concretions show that they are composed mainly of microcrystalline carbonate cement, with minor amounts of detrital minerals, lithoclasts and bioclasts. Aragonite is present as microcrystalline cement or acicular crystals infilling bioclasts and voids. Pyrite occurs as framboids or cubic crystals, which are often associated with authigenic carbonates, thereby indicating that sulfate reduction was active during carbonate precipitation. Numerous millimeter- to centimeter-size euhedral gypsum crystals have been observed within carbonate crusts and concretions, and as isolated crystals in sediments recovered from the eastern province. In this area, precipitation of gypsum is related to the presence of rising sulfate-rich fluids, which originate from the dissolution of underlying Messinian evaporites. Millimeter-size barite concretions have also been discovered in sediment from the central province and precipitated from ascending fluids, which are enriched in barium due to the dissolution of biogenic and/or authigenic barite below the depth of sulfate depletion. The oxygen and carbon isotopic compositions of the carbonates display very large ranges, from −0.67‰ to 4.15‰ Vienna PeeDee Belemnite (V-PDB) and from −42.14‰ to 3.10‰ V-PDB, respectively. Most carbonates exhibit δ18O values around 3‰, indicating that they have precipitated in isotopic equilibrium with bottom seawater. In contrast, two carbonate concretions from the caldera and the eastern areas are characterized by lower δ18O values (−0.67‰ V-PDB and 0.98‰ V-PDB), which may reflect a contribution from 18O-poor (continental?) water or, most likely, a local high heat flow. A few carbonate crusts exhibit slightly positive δ13C values, which indicate that seawater was the main source of carbon for those carbonates. Authigenic carbonates are typically depleted in 13C, revealing that the major carbon source for those carbonates derives from anaerobic oxidation of methane driven by microbial consortia of archaea and sulfate reducing bacteria.